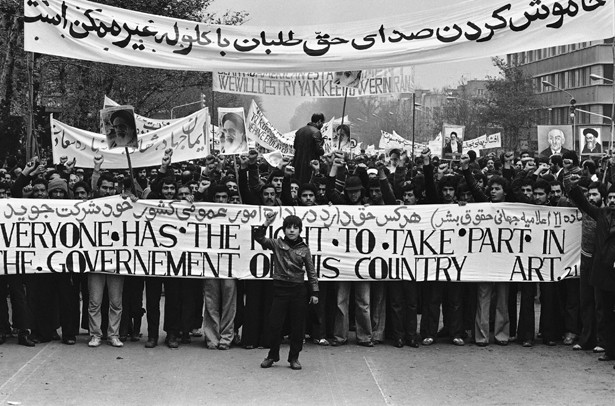 Anti-Shah demonstration in Tehran, Iran, estimated at over a million strong, Dec. 10, 1978.

Flounders gave the following talk in New York City at a Feb. 21 forum on the 37th anniversary of the Iranian Revolution and upcoming elections.

Today’s Iran Forum in New York City is a historic event because it involves Iranian leftists with very different views in the U.S. celebrating and analyzing the Iranian Revolution — a revolutionary upheaval that dramatically and abruptly changed history.

There are big hopes and expectations today in Iran and also great apprehension of what an end to sanctions, the upcoming elections and  changing economic patterns will mean.

The people of Iran will not be left alone, not for one minute, to sort this out for themselves. They have to take into account U.S. imperialism’s plans.

The perspective I was asked to contribute to today’s discussion is to explain why U.S. imperialism has for decades been so hostile to the Iranian Revolution. The Iranian Revolution was one of those rare social explosions, an uprising of the most oppressed and disenfranchised, that succeeded in breaking totally with the past.

Republican or Democratic administrations, there is small difference. Every bourgeois current in the U.S. is determined to use every possible tactic to overturn the Iranian revolution. U.S. imperialism supports, defends, reinforces the forces of reaction everywhere in the world. Global domination needs puppets, proxies and totally corrupt collaborators.

The difference in U.S. relations with Iran during the decades of the Shah — the Mohammad Reza Pahlavi monarchy — and the 37 years since the Iranian Revolution are night and day.

Every revolution is targeted

To help put intervention in the Iranian Revolution in perspective, consider the Haitian Revolution, which began 225 years ago. It was an earth-shaking event, a revolution in which enslaved workers freed themselves.

Haiti was a fabulously wealthy French colony based on enslaved labor that produced export cash crops of sugar, coffee and cotton. The Haitian Revolution faced a series of invasions — by France, Britain, Spain and U.S. France imposed onerous reparations on the Haitian people for freeing themselves. Haiti suffered the longest sanctions imposed in history — 60 years of U.S. sanctions.

The richest colony in the Western Hemisphere became the poorest country.

Every election in 200 years of Haitian history has had to deal with U.S. imperialist intervention. Two hundred years of assassinations of leaders and kidnapping of leaders from Toussaint Louverture to President Jean-Bertrand Aristide.

Haiti was isolated, unlike the Cuban Revolution, which came 160 years later. Of course, neither country was a military threat. But revolutionary ideas are contagious. The capitalist owners of property well understand that nothing is more dangerous.

So it is not surprising that the Iranian Revolution is hated by U.S. imperialism. Every accomplishment by Iran is a dagger pointed at imperialist domination. U.S. imperialism will never wish Iran well. Nothing Iran does will change that historic reality.

It was the revolutionary overturn of the brutal, U.S.-imposed Iranian monarchy in 1979 that fundamentally decreased U.S. corporate and military influence in the entire region. They have tried to regain their footing ever since.

The Iranian Revolution decisively broke from the unequal contracts serving the giant oil corporations — Exxon, Mobil and Shell. But its greatest danger is that it served as a revolutionary example.

Iran has a capitalist class that is anxious to increase its own profits and position. But the Iranian Revolution was forced to make a sharp break with imperialist domination — as the only way forward.

A radical Muslim clerical leadership with a strong anti-imperialist focus has maintained this fundamental break for 37 years. This is quite an accomplishment.

By developing its economy independent of Wall Street theft and domination and controlling its own resources, Iran has transformed itself within three decades from an underdeveloped country with massive poverty into a modern state with a highly educated population.

While capitalist relations prevail, the aroused population was able to win free medical care; free education, including at the university level; a modern infrastructure; and housing with full electrification. Women’s education has improved from majority illiteracy to full literacy. More than 60 percent of university students are now female.

The class struggle continues in Iran and so do the raging wars in the region fueled by U.S. imperialism. The class struggle at this time is reflected in this round of elections taking place in Iran. The elections are for parliament and for a smaller but far weightier body — the Assembly of Experts. This elected body will decide the Supreme Leader, if 76-year-old Ayatollah Ali Khamenei dies or steps down.

Will the U.S. attempt to intervene in these elections in Iran?

There is no country in the world today in which U.S. imperialism does not interfere in the elections — from Moldova and Ukraine to Venezuela to the Philippines.

U.S. corporate and CIA-funded nongovernmental organizations operate in every country. Media stations beam into Iran and also into Bolivia, Russia, the Philippines, Ukraine, Serbia, Syria, Turkey. This is a global empire.

Its tentacles are everywhere. It seeks out the most reactionary and corrupt forces, those most willing to make a deal and the forces that are the most naive.

U.S. imperialism especially seeks to use youth movements. Youth are always interested in change and in the wider world and don’t yet have political memory. So it is possible to masquerade as an exciting force for change. This is a big challenge for embattled countries attempting any independent development to which they must constantly be on guard.

The Iranian Revolution is one of the most complex developments. It was and still is fiercely nationalist, religious and anti-imperialist.

Imperialists are more than willing to use religion in its most reactionary form. These tactics led directly to the creation of al-Qaida and today of the Islamic State group, or DASH.

The CIA orchestrated and funneled military equipment, advisors and paychecks, beginning shortly after the Iranian Revolution in 1979, to turn back the Afghan Revolution. Neighboring Afghanistan was far poorer and less developed, the rural peasantry far larger.

Iraq, Syria and Libya were each modern, officially secular states. But they were attempting to develop independently of Wall Street domination. There can be no greater crime!

U.S. weapons provided to both sides played an important role in the Iran-Iraq War from 1980 to 1988. Henry Kissinger said, “I hope they both kill each other.”

The U.S. war on neighboring Iraq in 1991 and the years of bombing, invasion and occupation of Iraq, beginning in 2003, spread shockwaves of destruction through the entire region.

The NATO destruction of Libya with seven months of bombing in 2011, and the past five years demanding regime change in Syria by arming more than 100,000 fighters, has dislocated millions of lives.

Massive U.S. bombing campaigns in each of these countries destroyed the infrastructure — electrification, schools, roads, industries, irrigation, health clinics — painstakingly built over decades. Years of instability and the chaos of war, while the U.S. pumped in weapons and military advisors, have enabled hundreds of reactionary armed groups to flourish.

Always the imperialist thinking is that shortages will fuel opposition, dislocate the economy and help efforts at regime change. The calculation is also that the struggle to get sanctions lifted will lead to concessions and that the pressure they create will lead to divisions among governing coalitions.

Sanctions are a form of warfare. They are economic extortion by a group of nuclear-armed pirates.

Finally, U.S. sanctions legislation demanded that every country in the world participate in a blockade of Iran or face severe U.S. penalties and be cut off from the vast network of U.S. banking, loans and credits.

The agreement reached July 14, 2015, between Iran and the “5+1,” the five permanent members of the U.N. Security Council (U.S., Britain, France, Russia and China) plus Germany, is a huge achievement — for Iran.

Whenever any oppressed country, besieged by imperialism, is able to gain a treaty, gain even a temporary agreement or forestall an outright war while maintaining its sovereignty, it should be acknowledged as a victory over U.S. intransigence.

But it is not the end of the struggle. Not at all.

Just as international sanctions were lifted, new U.S. sanctions were imposed in January. It was a new warning to every corporation seeking to do business with Iran.

U.S. imperialism is always looking for a weak spot. For example, Iran has every right to hold elections and have different contending views. But in 2009 U.S. imperialism intervened directly in the Green Movement in Iran and championed the movement in the West. Every Western politician came forth to give it support.

That does not mean that the Green Movement was an imperialist movement; it was not. It means that imperialism will use every possible crack and difference to drive a wedge into.

There are moderate forces in Iran who are so anxious to lift religious and social restrictions that they ignore the far greater threat of U.S. imperialism.

We should remember the collapse of the Soviet Union, a powerful socialist country that survived 70 years of imperialist encirclement. But the hope of loosening the enormous pressure of the Cold War, and decades of nuclear standoff, led a grouping under Soviet President Mikhail Gorbachev to believe Secretary of State James Baker, who promised that NATO would not expand one mile east if Soviet troops were withdrawn from East Europe and the Warsaw Pact dissolved.

Of course NATO expanded to every country in Eastern Europe, to several former Republics and today encircles and threatens Russia.

Losing sight of the most dangerous threat — U.S. imperialism — can have horrendous global consequences.

The only time it’s possible to resist an imperialist onslaught is when there is some unity. In this period, when socialism has suffered enormous setbacks, it is not socialist solidarity, as in Vietnam. Now it is targeted countries understanding their basic national self-interest.

The Syrian War is not about Syrian President Bashar al-Assad. It is an imperialist demand for the total surrender of Syria. That is what “regime change” means. There will be no “peace” unless there is total surrender.

But war in Syria is about much more than Syria. It is a proxy war against Iran. It is a war to decide total U.S. domination of the region. Saudi Arabia, the gulf monarchies, Turkey and of course Israel all consider Iran a rival for power and influence.

The U.S. failed spectacularly in maintaining sanctions on Iran, failed in its conquest of Iraq, and is failing in its war in Syria.

But the threats continue. There is no end in sight to war in Afghanistan. This keeps an enormous U.S. military presence right on Iran border.

Yesterday the U.S. bombed Libya, which they have brought to total ruin.

U.S. imperialism has attempted through decades of ever-tightening economic sanctions, endless forms of industrial sabotage, political subversion, assassinations, isolation, military encirclement, destabilization campaigns and endless media vilification to bring down the Iranian government and restore a subservient regime such as the one which ruled Iran before the 1979 Iranian Revolution.

So continued U.S. hostility has to be part of every calculation of the Iranian government. It is the big issue in every election.

There are large militarist factions in the U.S. ruling class that are still determined to push for war with Iran. Other forces want to use economic leverage.

The struggle against Iran seems, at this juncture, to have shifted from a political and military struggle to an economic struggle. That means that the race is on for economic penetration. The challenge is for Iran to keep the economy independent of imperialist domination, yet continually developing and modernizing.

We need a strong, conscious movement here in the center of imperialism that defends Iranian sovereignty and economic development in the face of endless threats and provocations.

This does not mean agreement with everything Iran does. There are many different political currents. It means at every step we need to demand: Hands Off Iran! Defend the gains of Iran!