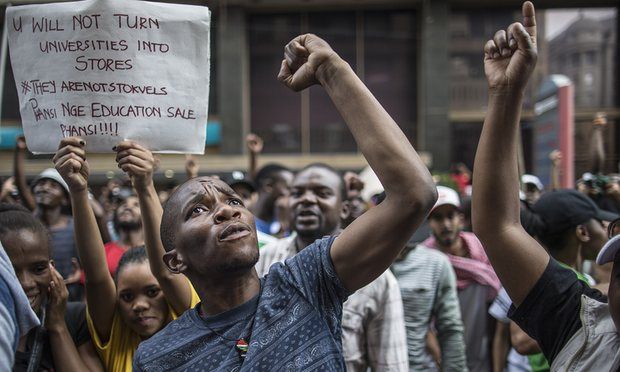 During the week of Feb. 22 student protests over different issues at universities around South Africa erupted into clashes with police and the burning of buildings, leading to the closing of some campuses.

At North West University,  buildings were burned after protests over tuition costs and the removal of the elected Student Representative Council. University officials removed the student council group led by Benz Mabengwane, who is associated with the opposition political party, the Economic Freedom Fighters.

Some reports suggest that the ousted council was expelled because of its role in recent protests on campus.

Chairs of council subcommittees were appointed to take over the SRC, prompting unrest. Supporters of the Mabengwane group disrupted the inauguration ceremony for the appointed council members. University security personnel later used teargas and rubber bullets to break up demonstrations.

An EFF spokesperson of the dissolved student council, Rebaone Pudi, said management was “quick to appoint those who will succumb to their demands. … Management wants leaders who can agree to financial exclusion of students and we’re not going to accept that.” (City Press, Feb. 24)

Pudi went on to say, “The university has also been spending money on armed private security while they wanted poor students to go back home. We demand the demilitarization of our university so we won’t see any more live ammunition being used on students.”

Another campus organization, the South African Students Congress (SASCO), which has historically supported the ruling African National Congress party, also disagreed with the removal of the SRC group led by Mabengwane.

“We can’t have a student council that was elected by management representing students,” said Karabo Kau, SASCO chairperson, in the same article. “They will obviously represent no one else’s interests but those of management,”

At the University of Pretoria fights broke out between Black and white students over the continuing instruction in some courses in Afrikaans, the language of colonialism and apartheid spoken by white Boer settlers descended from the Dutch. Although many Africans speak Afrikaans as well, due to the legacy of European domination, many feel the language should not be used in numerous classes in various universities.

Universities in South Africa offer courses in both English and Afrikaans. However, with concerns mounting over rising tuition costs and the continuing disparities in income and wealth between Black and white populations groups, these social variables are fueling tensions over access to higher education.

Those who are not fluent in Afrikaans face a fundamental disadvantage when lectures are delivered in classes where only the language of the settlers is spoken. Consequently, such a language policy in higher education serves as a quota of faculty positions and university student admissions for whites who are of Afrikaner descent.

On Feb. 19 at the University of Pretoria Hatfield and Groenkloof campuses, student supporters of the opposition EFF Student Command fought with members of AfriForum Youth, an Afrikaner cultural group. The two groups took opposing sides over an amended language policy for instruction. Over 20 people were arrested in the disturbances, prompting suspension of classes for six days.

The proposal was that English be used as a primary language of instruction in all classes and that Afrikaans and Sepedi, one of the Bantu languages indigenous to the area, be used for additional support to students in tutorials and practicals. Afrikaans-speaking students protested that it was a direct attack on their culture and heritage.

Classes resumed at the UP campuses on Feb. 29 amid tight security.

University of the Free State erupts

At the University of the Free State the week of Feb. 22, Black and white students fought during a rugby game after tensions flared. African students have accused the administration of failing to transform the campus to reflect the majority population inside the country.

Classes resumed at UFS on Feb. 29, though student leaders said they were still committed to demanding the resignation of the Vice Chancellor Jonathan Jansen.  SRC President Lindokuhle Ntuli said that students would not disrupt classes.

On Feb. 23, protesters toppled and damaged a statue of Charles Robberts Swart at the university. The last governor general of the Union of South Africa until 1961, Swart was president of the Republic of South Africa from 1961 to 1967. Demonstrators burned tires at the statue while using hammers and rocks to tear it down.

On Feb. 25, campus security personnel were deployed to prevent the statue of Marthinus Theunis Steyn from being damaged. Steyn was the sixth and last president of the Boer-dominated Orange Free State from 1896 to 1902.

Classes resumed at UFS on Feb. 29, though student leaders said they were still committed to demanding the resignation of the Vice Chancellor Jonathan Jansen. SRC President Lindokuhle Ntuli said that students would not disrupt classes.

These developments have been condemned by President Jacob Zuma: “No amount of anger should drive students to burn their own university and deny themselves and others education.” (AP, Feb. 25)

On Feb. 19, African National Congress Secretary General Gwede Mantashe accused the U.S. Embassy of fomenting violence inside the country aimed at the overthrow of the government. According to News24.com, he was speaking to a gathering of 87,000 supporters the ruling party had organized in Pretoria to “defend the revolution.”

Mantashe said the South African government was aware of a program that sent youth to the U.S. for six weeks and then “plants them everywhere” when they re-enter the country.