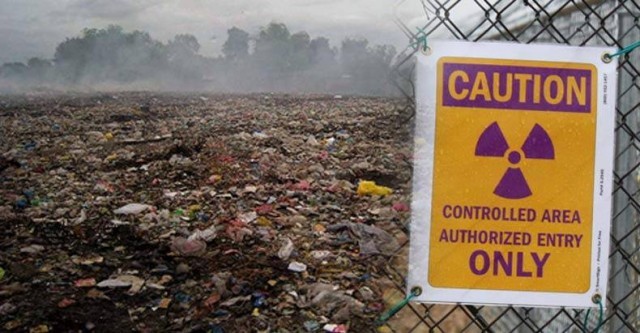 In 1973, thousands of tons of toxic radioactive waste from processed uranium for nuclear weapons were illegally dumped into the Westlake landfill in the town of Bridgeton, Mo., next door to Ferguson. The waste material from the Mallinckrodt Chemical Works in St. Louis originated as part of the Manhattan Project to build the first atomic bomb.

The landfill, approximately 200 acres of property within the city limits of Bridgeton, was placed on the U.S. Environmental Protection Agency’s Superfund National Priorities List in 1990, when evidence of nuclear contamination began to surface. Toxic nuclear waste was polluting the creek waters and playgrounds where children played.

However, while the EPA monitored the site, it has done little to contain the problem or clean up the mess.

For more than 30 years, Bridgeton residents voiced concerns over cancer clusters and the prevalence of birth defects. Department of Health surveys of eight zip codes surrounding the site confirmed the higher rates of cancer, including rare forms of leukemia among children.

Like many other Superfund sites, Bridgeton is predominantly a community of color with demographics much like nearby Ferguson. Many residents are low-income families forced out of St. Louis by decades of gentrification. Most are too poor to leave Bridgeton or relocate again.

The Westlake landfill is one of many examples of environmental racism, largely under the radar as far as the corporate media are concerned. However, things are about to get a whole lot worse for area residents.

For months, fires have been burning in 200 feet of rotting garbage in an underground landfill dangerously close to the radioactive waste fill. In a response that echoes the government’s callous treatment of Flint, Mich., residents when lead was discovered in their water, local Bridgeton officials sent letters to parents advising them to “shelter in place” should the fires reach the nuclear waste.

While government officials sit on their hands for months, the fire continues to spread ever closer to the nuclear waste containment area. On top of the problem of the fire, radioactive contamination from the landfill has likely already migrated off-site, according to a study by the Journal of Environmental Radioactivity published in January.

The study of more than 200 samples of soil and sediments from an approximately 75-square-mile area around the landfill found dozens of incidents of radioactive lead. The toxic lead likely came from radon gas that escaped from the site. Some of the highest lead levels came from dust samples in several homes.

The EPA has claimed that putting out the fire would require extensive excavations and might increase the risk of toxic fumes should the fire breach the surface. They have ordered the landfill operator to construct a barrier between the two landfills. However, that could take years to build.

The Westlake landfill fire is eerily reminiscent of the fire that resulted when the city of Philadelphia bombed the MOVE home in 1985. Firefighters were told to stand down and let the fire burn. Eleven men, women and children died and more than 62 homes were destroyed as a result.