This is the second of three articles to appear in WW based on excerpts from a conference call dialog among members of Team Solidarity in Boston and Workers World Party, held on Feb. 14. Part 1 was published in the March 10 issue of Workers World and included remarks by Larry Holmes, Andre François and Chuck Turner. The discussion centered around what made it possible for the Boston School Bus Drivers Union, Steelworkers Local 8751, to win a long struggle against the global giant Veolia/Transdev, in which the union got a good contract and the return of four fired leaders with back pay. This article begins with additional remarks by Turner. 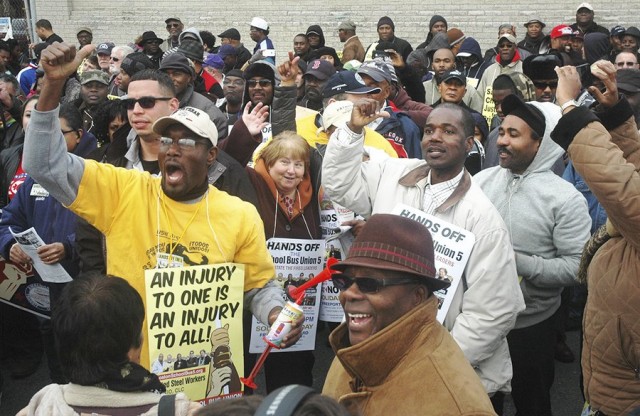 The struggle that’s going on in [Local] 8751 is tremendously important to the workers and the community and needs to be duplicated across the country. At the same time, I have to recognize, as a person who is 75 and has been active in the community, delivering service to Black people and people in general throughout my life, the reality is that the majority of people of my race are not in unions and not employed.

So that raises a very serious question: In addition to organizing our workers who are in companies and in unions, how do we begin to develop a movement around the issue of our unemployment? And how do we put ourselves to work? Because the reality is Black people cannot look to the capitalist system to employ those of us who have been robbed of our labor for the last 400 years.

How do we begin to think about building a movement that will put us back to work so that future generations will have some likelihood of working? At this moment, there are millions of us who are unemployed across the country and have no realistic expectations of a job or of being in a union. There are 900,000 of us who are in prisons who are going to be coming back to communities where the official unemployment rates are 20 to 30 percent.

While we have to focus on organizing our workers who are in the unions and on building unions, we also have to recognize that, for liberation for ourselves as a people, we have to build among those who are unemployed strategies for putting us to work, because we certainly cannot look to the capitalists to do that

Steve Kirschbaum
Vice president, USW 8751, and one of the Four (fired workers)

8751 is very, very interested in playing whatever role we can play, as Chuck was able to do, with the Boston Workers’ Alliance and other efforts to deal with workers coming out of prison and being denied employment. This is organizing to organize the unorganized. We need to take a page out of what was done with the unemployed marches and other efforts in the 1930s. I think this is critical for both the Team and the Party to pay very serious attention to.

This victory was not really a three-year victory. It was decades in the making, and it was a resounding confirmation of militant, class-conscious, politically active unionism, which some call “social unionism.” We take to heart what other revolutionaries — Lenin, Trotsky, Sam Marcy and others — have said: That the unions are the workers’ first line of defense, not just for a contract, not just for a grievance, but for all those ills of capitalism that affect our class.

At first, when we were fired, the Tea Party commentators in the bourgeois press and others redbaited us; they talked about our support for Cuba, for presidents Chávez and Maduro in Venezuela, for General Giap in Vietnam. They quoted from remarks we’d made at Workers World conferences about GPS technology representing Homeland Security’s incursion into the workplace. That was an indication from the enemy that this was really a political struggle, a calculated campaign to drive out of USW Local 8751, those “red” political forces who had founded the local and had been in the local for 40-plus years.

One of the main reasons for our victory was solidarity with and from the community, rock-solid alliances based on the fact that the union had been so much a part of all the struggles of the community, particularly communities of color, and the political movement over the decades in Boston.

Those alliances are also recognition that 8751 itself is of the community. Our local is now 98 percent people of color, mostly from Haiti, mostly immigrant workers and a large percentage of women. Local 8751 is a snapshot of the insightful description of the changing character of the working class in Sam Marcy’s book, “High Tech, Low Pay.” [Read online at workers.org/marcy/cd/samtech/index.htm.] When I first started driving the school buses in 1974, among the workers driving the buses were only a handful of people of color and two women. The successful fight, since the 1970s, to provide good union jobs for workers in the oppressed communities and for women represents one of the most significant achievements for the politically class-conscious leadership of the local.

We all have to broaden the definition of solidarity. Yes, we had a rock-strong rank and file who were loyal, militant and defiant. I remember a scene at the end of one of the trials, when the head of the corporation was leaving the court and was chased by a hundred workers. If it wasn’t for the cops, I don’t know what would have happened to him. My Haitian brothers and sisters said, “If this was Port-au-Prince, we know what would have happened to him!” That’s the kind of power we have in the rank and file.

And, yes, we have sought to broaden the view of solidarity, to join with the anti-Veolia national and worldwide movements: the Boycott, Divestment and Sanction (BDS) movement in support of the Palestinians; the Black Lives Matter movement; the anti-war movement; and all the other political movements.

We are trying to live the trade union legacy of the founders of Workers World Party. We call it “old-school unionism,” employing the fundamentals: militant mobilization and reliance on the rank and file; building solidarity with the community and engaging the union in all struggles of the “workers and oppressed”; fighting racism, sexism, LGBT oppression, discrimination against people with disabilities, poverty and war. For example, I’m very proud of the fact that the language we won in the new contract guarantees no discrimination against our trans* sisters and brothers. This language was drafted in consultation with leaders from the movement, bringing their voice to the negotiating table.

Our struggle provided a virtual strategic and tactical “clinic” regarding “how to” address the many challenges facing labor militants: dealing with a global corporate monster; a viciously anti-union bourgeois state (cops, courts and City Hall); vicious austerity cuts; class collaborationists in the local’s leadership; the nonstruggle trade union bureaucracy (“labor lieutenants of capital”); and so forth.

We believe the rich lessons of this victory are worthy of study by our movement. Our successful battle provides concrete confirmation that you can fight back and you can win. Our enemies may have the money, but we have the people and we have the power!

‘For a union to remain strong’:

Garry Murchison
Former president, USW 8751, grievance chair, and one of the Four

In Local 8751 are a group of people who do exactly what our other members do. We don’t hold executive positions and sit in an office all day. We actually get out in the field, we participate, we have conversations with our members, we have yard meetings. We don’t act as if we are an Executive Board — we are bus drivers, regardless.

Steve Gillis
Financial secretary, USW 8751, and one of the Four

Those of you who graciously came to Boston to fight the court case against Local 8751 know the way that we won was to employ a class-struggle approach. We organized hundreds of people, even on some of the most snowbound days of the year, when everything in the city was closed except Dorchester District Court. We got people to court in a way that had never been seen in the city of Boston. We packed the court, we subpoenaed our bosses, we subpoenaed the general manager of the corporation, we subpoenaed a government official. The Veolia guy who is now in charge of transportation — we made him sit in the hallway for three days while picket lines and demonstrations went on inside and outside. We put the company on trial, in effect, at Dorchester District Court, and the working-class jury, after a three-day trial, took less than 10 minutes for a verdict of “not guilty.” It was obvious to them, as it was obvious to us, as it is obvious to hundreds of million of people around the world, that this corporation and this government, with its austerity plan, are guilty of crimes. It is not us!

In the last couple of weeks, while performing my duties as administrator of the members’ 401(k) pension plan and also being in the yards, it’s been an additional task to try to figure out what to do about the wage theft that’s also coming from the entire system. These recent weeks have seen the capitalist system begin a huge collapse in its financial system and in its system of oil production, which is at its base.

We’ve seen hundreds of thousands of layoffs happening in this period, and we hope some of the lessons from the Boston School Bus Drivers’ victory will be able to bring to our class an understanding of how to fight that. The victory that we’ve had can be very useful to anybody else in this country or around the world who is fighting the same kind of government-austerity monster that Veolia is. It’s almost the epitome of the corporate Pinkerton hired gun! This is a corporation of international criminal proportions.

But we can see how this colossus is something of a monster with feet of clay, and we can spread the lessons of victory and be of assistance in organizing a broad struggle to overthrow this system that is targeting us every day.