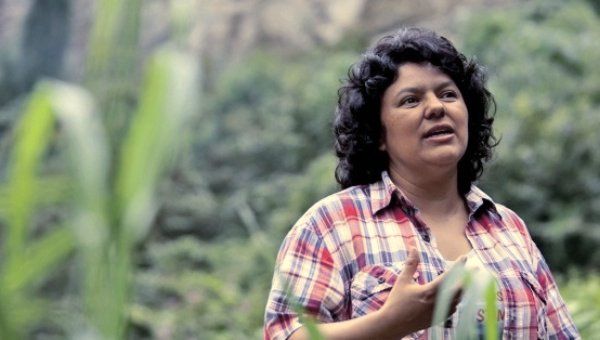 Berta Cáceres, one of the leading Indigenous activists in Honduras who spent her life fighting in defense of Indigenous rights, was gunned down and murdered on March 2 in her hometown of La Esperanza, Intibuca, Honduras. The following is a message from the International Action Center in the U.S. in response to this murder.

The International Action Center joins in solidarity with the family of compañera Berta Cáceres, and the members of her organization COPINH [Council of Indigenous and Popular Organizations of Honduras], with the Lenca nation and the rest of the Honduran people who today are grieving the tragic end to her life.

Berta’s legacy strengthens the spirit of resistance she maintained despite the horrible conditions forced upon an activist fighting for a better and more just world. In the light of her continuing struggle against transnationals, banks and the Honduran state, which maintains a policy of repression against the people and impunity for the police and paramilitaries, this struggle becomes a lesson and an example to follow at an international level.

Her death has multiplied the Bertas of the world. Today we are all Berta Cáceres.

Based in the U.S., the IAC takes up the challenge to expose and redouble our efforts so that U.S. imperialism — which promoted the 2009 coup that ousted the legitimate president of Honduras, Manuel Zelaya, and continues its repressive policies under agencies such as USAID [U.S. Agency for International Development] and a huge military apparatus — must answer for its direct or indirect participation in this horrendous crime.

The members of the IAC will persevere in this task as we continue our struggle against racism and sexism inside the criminal monster and, in general, against capitalist oppression that continually increases the gap between rich and poor.

We condemn this murder and demand that the Honduran state punish, with all the force of law, not only the perpetrators of this horrible act but also the intellectual co-conspirators who benefited from Berta Cáceres’ death.

We also demand that the U.S. government cease and desist from intervening in Honduras and other countries in the region and the world. The conditions of Indigenous, Black, Latino/a and also the white working class in the United States are deteriorating rapidly. Police terrorism, which last year claimed the lives of more than 1,000 people in this country, has become an epidemic. Solving this crisis is what the U.S. government should pay attention to instead of creating more crises internationally.

We furthermore demand that the U.S. government refrain from helping to cover up the real actors behind the assassination of Berta Cáceres and to desist from giving its customary shelter to the murderers, for example, as it does by protecting the criminal Posada Carriles.