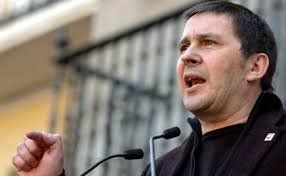 Arnaldo Otegi, the recognized leader of the Basque Patriotic Left, was released on March 1 after more than six years in prison. He immediately reentered the political struggle for self-determination for the Basque Country from the kingdom of Spain.

Another nearly 500 Basque political prisoners have been dispersed all around the Spanish state and around France. Most are located between 300 and 700 miles away from their family, friends and comrades, who live in the Basque region in north-central Spain. The movement that won Otegi’s freedom plans to continue the struggle to free the hundreds of other political prisoners.

The Basques are a people who number between 2 and 3 million worldwide, most of whom live in the highly industrial Basque region, with a smaller number to the east across the French border. They speak a unique language with no relation to the Romance languages spoken in France and other parts of the Spanish state.

The dictatorship of Francisco Franco, which lasted in Spain until Franco’s death in 1975, repressed the Basque language and people. The Basques opened an armed struggle for liberation in 1959 and continued it when the new 1978 Constitution continued to repress the region. The liberation organizations initiated a peace process in 2006; since 2010 there has been a decision by the armed liberation organization, known as ETA, to cease military operations.

Otegi is the leader of the political organization of the liberation movement, which is now known as Sortu, and was a leader of the peace process. The leaders of the Spanish imperialist bourgeoisie, especially the right wing in the so-called Peoples Party and in the state apparatus, feared the development of a strong popular movement for liberation under peaceful conditions. Thus they targeted Otegi for arrest and imprisonment in 2009, charging him with being a leader of ETA, along with eight other Basque leaders.

The movement for self-determination has great support among the Basques, who vote for independence and for left parties in much greater proportion than others in the Spanish state. , with the possible exception of the voters in Catalonia, another nation and people inside the Spanish state. In the most recent national election on Dec. 20, the Basque Country gave the largest vote to Podemos, a dissident party that grew out of the “indignant ones” movement of 2011 and campaigned against austerity.

Speaking before more than 10,000 supporters who spilled out of the Velodrome — the bicycling arena — in the city of Donostia (San Sebastian) on March 5, Otegi pledged that Sortu would continue the peace process, saying, “We are fighting for the liberty of this country and we will never stop.” (Japan Times, March 6)

Many observers note the parallel between Otegi’s role and that of Gerry Adams of the Irish political party Sinn Fein. On the websites of the two organizations are many statements and articles of mutual solidarity, as well as solidarity with the movement for Kurdish self-determination.

Workers World sent a message of solidarity greeting Otegi’s release and pledging “to continue our support for the struggle of the people of the Basque Country and of all freedom-loving people to bring the Basque prisoners back to their homeland and to free all the political prisoners.”