From a talk by Kazem Azin, co-founder of Solidarity with Iran, at a Feb. 21 forum on the 37th Anniversary of the Iranian Revolution and Upcoming Elections at Judson Memorial Church in New York, organized by the Iran Forum. 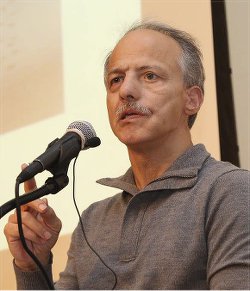 The Islamic revolution triumphed in Iran on Feb. 11, 1979. Some people hesitate to name it an Islamic revolution. But after more than eight decades of competition between left, nationalist and religious forces, what happened was that this competition ended with the clerics, led by Imam Khomeini, being in complete leadership of one of the greatest and most popular revolutions in the Middle East, as well as in the world, in the 20th century.

The Islamic leadership and especially the clerics will be held accountable for the accomplishments and failures of the past 37 years, as well as in the foreseeable future.

Many forces from the leftist and nationalist tendencies who failed to accept this historic fact made serious mistakes. For example, the “Sazeman Mojahedin Khalgh” (People’s Mujahedeen) ended up uniting with imperialist forces against the Islamic Republic of Iran.

Why were the bourgeois nationalists unable to win the leadership of the great revolution of 1979?

The nationalists represent the national bourgeoisie, that is, those who sought independence from the imperialists with the hope of transforming Iran’s society from a feudal mode of production to a modern capitalist society.

This political force had been overthrown by the imperialists following both what was called the “Constitutional Revolution” of 1905-1911 and the “Movement to nationalize the oil industry” in 1952 by coup d’état.

There is a scientific, socioeconomic reason for the defeat of these movements.

Disrupting the natural pace of national economic development, Iran’s native industrial capitalism became subservient to colonial relations, such as the imposition of one-sided trade arrangements. This led Iran’s economy to be underdeveloped and dependent on the imperialist-dominated world economy.

Iran’s national industry was like an infant with one foot in the cradle and the other prematurely in the grave. Under this condition, the efforts of the native industrial capitalist class for national development were squashed. We illustrate this with several tangible examples.

In 1903, Sani’odoleh started a textile manufacturing industry that produced quality products. However, in competition with foreign interests, the industry was undermined and its proprietor was assassinated. A crystal factory launched by Monsieur Lange, another crystal factory started by Amin-o-Zarb in Isfahan, a china factory launched by Mo’tamed ol-Soltan, brick oven factories, sugar, matches and paper manufacturing in Tehran and Isfahan — all faced similar fates.

Historically, the popular, democratic King Karim Khan Zand, and later premiers such as Amir Kabir, Gha’em Magha Farahani and Mohammad Mosaddegh, were all national leaders attempting to aid the development of native national industries, but every one of them was undermined and blocked.

Therefore, the forces of the nationalist camp were weak and not radical enough to confront imperialist aggressiveness. Any anti-imperialist struggle in reality divided the nationalist forces into three sections: the majority would collaborate with imperialists, a minority would turn to the left and a moderate centrist grouping would take an inactive position. This is exactly what happened both in the Constitutional Revolution of the early 1900s and later in the oil nationalization movement. For example, most of Dr. Mosaddegh’s ministers in the National United Front of Iran abandoned him and collaborated with the 1953 coup d’état.

The majority of the people of Iran lost confidence in the bourgeois nationalist leadership through hard historic experience, in which thousands sacrificed their lives.

Considered on the left were all those who supported economic and social justice and government intervention on behalf of the people. Historically, there were leftist tendencies within all the nationalist and religious forces. Among them were communists, who called themselves the vanguard of the industrial working class. Their guiding ideology was Marxism-Leninism, that is, scientific socialism.

In the West, when there was no imperialist force dominating from the outside, the industrial working class was born with the creation of the capitalist mode of production and there were revolutions that put the capitalist classes in power.

When the imperialists were suppressing Iran’s native capitalist development, did they also prevent the working class from playing its historic role?

The industrial working class in Iran was born even before the national capitalist class. The imperialists suppressed and caused the continuous disintegration of Iran’s native industrial capitalists, forcing the closing of native factories, while increasing taxes drove the superexploited peasants from rural areas to the cities, creating an army of unemployed and poor.

These workers had only two choices: emigrate to the south of czarist Russia or remain in Iran and sell their labor to the comprador capitalists, who were subservient to the imperialists.

Number one, they were among the first social forces whose life experiences taught them the role of imperialist exploitation and imperialist political intentions and showed them that imperialism was the main enemy of all Iranian people.

And number two, the Iranian workers in south Russia under czarist rule engaged in the Russian working-class movement before the October 1917 revolution and became Bolsheviks with an unprecedented level of political consciousness. The main leader of this group was Haider Khan Omo Aoughlo, who co-founded the Communist Party of Iran, which later became the Tudeh Party. Haidar Khan was the first leader to advocate the formation of a national united front as the main political organization capable of defeating imperialism.

In brief, it is important to mention that the imperialists treated this force as their major enemy. It is a historic fact that all the coups orchestrated by Anglo-American imperialism to overthrow nationalist governments were followed by massacres of the left, especially communists. Communists were never able to win the leadership in a national united front but had the most direct and indirect political influence on all these movements, including the 1979 revolution.

There were three reasons why the 1979 revolution was led by revolutionary democrats. Two involve Iran’s socioeconomic characteristics.

First, Islam — especially the Shiite branch — which was integrated with Iranian culture as an old civilization — played an active role in political struggles throughout history.

Second, Iran was a source of energy which the imperialists could not afford to let go. Just look what the imperialists have done all over the Middle East since the collapse of the Soviet Union.

And third, Imam Khomeini played a historic role in Iran’s contemporary history, starting with taking a revolutionary position on the so-called “White Revolution,” carried out by the regime of the shah to prevent an agrarian revolution in Iran.

Imam Khomeini was able for the first time to unite all religious groups and the majority of the people under the banner of Islam. It is ironic that the will of the communist Haidar Khan could only be carried out by revolutionary Islam, headed by Khomeini, who took an uncompromising position against the autocratic regime of the shah and his master, U.S. imperialism.

Following the nuclear deal with the imperialists, the road to Iran’s independent industrial development has entered a new historical stage. Whether the Islamic Republic of Iran can achieve this goal, which Iran’s national bourgeoisie failed to complete, is to be seen in the future.