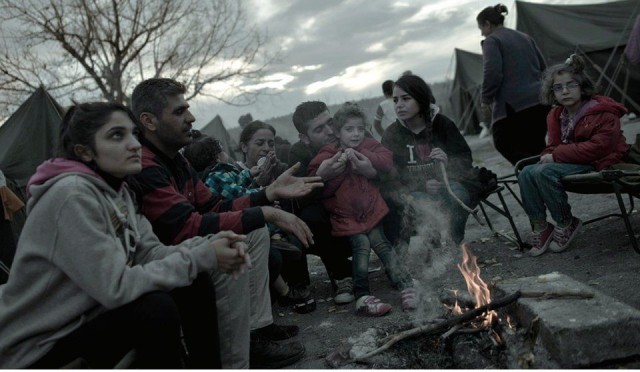 Even though the Aegean Sea in winter is cold and rough, conditions for migrants in Turkey are so harsh that over 102,000 of them have crossed the narrow waters from Turkey to the Greek islands since Jan. 1, according to an estimate of the International Organization of Migrants.

This is just a small part of the nearly 5 million Syrians who are refugees from the violent war that the United States and its NATO allies — like France, the Netherlands, Great Britain and Turkey — and its allies in the Gulf region — like Saudi Arabia and Qatar — have fomented, instigated and manipulated.

Now NATO, at the request of the European Union, has sent a flotilla of ships to the Aegean Sea to restrict and control this flux of refugees.

In the Balkans, Macedonia closed its border with Greece to all but a handful of refugees each day, beginning mid-February. Since between 1,000 and 2,000 refugees a day enter Greece, the Greek government has turned its passenger terminals in Piraeus, the port where the ferries dock, into temporary reception centers. Videos and photos show thousands of people — families with children, elders, youth, men and women — stretched out on the floors or waiting on long lines for a meal.

As the refugees keep on coming, they have spread out to the squares, traffic circles and sidewalks of Athens. The Greek authorities estimate that as of Feb. 27 there were 20,000 refugees on the streets and in temporary shelters in the capital city.

Small states like Macedonia, Serbia, Bosnia-Herzegovina, Slovenia, Slovakia, Croatia and Albania — countries in the western Balkans on the refugees’ route north — are virtual colonies of the wealthy powers of the European Union, especially the big imperialist powers like Germany. If pressured by the big powers to prevent the refugees from continuing their trip, they have few options but to close their borders.

Many refugees — at least 2.6 million, according to UNHCR [U.N. Refugee Agency] estimates — who are fleeing from the fighting that the war on Syria has engendered have wound up in Turkey. Those in western Turkey need to cross just a few miles of water to reach islands belonging to Greece. Many attempt the crossing.

Greece, one of the poorest countries in Europe, has been quickly giving this massive flux of refugees travel documents and sending them on to the wealthier countries they aim to reach. This strategy depends on a friendly reception for the refugees in much wealthier Germany, England and France. These last two countries have accepted only a minuscule number of refugees.

AKEL, which is the Progressive Party of Cypriot Workers, released a statement Feb. 10 on the situation of the refugees and the NATO intervention:

“NATO’s involvement in the management of flows of refugees in the Aegean Sea, following the objectives of Turkey and Germany, is a dangerous development. The new measures and mechanisms that the European Union and NATO are providing pose blatant threats to the sovereignty of their member states. At the same time, the intensification of repression against refugees and the militarization of the crisis foretells other tragedies in the Aegean and the Mediterranean.”

“AKEL reaffirms that there is no other definitive solution to the refugee crisis than the end of the bloody civil war in Syria.”