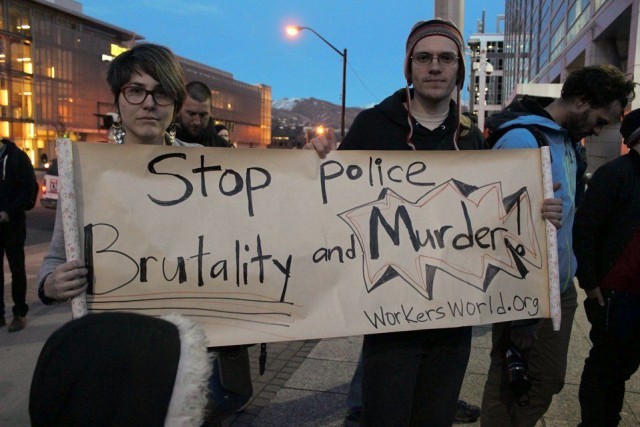 Salt Lake City, March 3 — Hundreds of people flooded downtown Salt Lake City on the evening of Feb. 29 for an emergency rally to demand justice for Abdullahi Omar Mohamed, who now lies in critical condition at a local hospital after having been shot in the chest and stomach by Salt Lake City police on Feb. 27. Mohamed, 17 years old, who lives with his girlfriend and their son, fled Somalia before moving to the U.S. from Kenya 10 years ago.
The rally stopped traffic as it flowed into an impromptu march along a central thoroughfare with chants of “Whose streets? Our streets!” “Black lives matter!” and “No justice? No peace! No killer police!”

The area of the city where the cop shot Mohamed is adjacent the city’s largest homeless shelter, right across the street from a shopping and condominium district whose construction gentrified the neighborhood. Also close by are large entertainment venues, from which crowds were leaving around the time the shooting took place. The area was heavily populated at the time.

Witnesses say Mohamed was involved in an argument while holding a broomstick. According to Selam Mohammad, 19, who witnessed the scene, the police “told him to put it down, once, and then started shooting him as soon as he turned around. They fired four times and he was hit in the chest and stomach.” (Salt Lake Tribune, Feb. 27)

Another witness who spoke at the Feb. 29 rally behind an illustrated picture of Mohamed was recorded on a video posted on Facebook by Susan Hunt, mother of a victim of a police killing, Darrien Hunt. This witness said Mohamed was already on the ground after the first shot when shots continued to be fired at his body.

Police made no effort to de-escalate the confrontation or subdue Mohamed without shooting.

The police then began harassing homeless people by throwing and kicking their belongings and using abusive language to tell them to leave the area, which is the only place they have to sleep. A vital 20 minutes passed while Mohamed received no medical attention before an ambulance arrived.

Bystanders were so outraged at the shooting that they began yelling and throwing bottles and rocks at the police. Others in the area were drawn to the scene and joined in. The immediate effect of the shooting was to intensify an already simmering tension into an eruption.

The police sent scores of squad cars, and reinforcements appeared with riot shields and assault rifles. Four people were arrested on charges related to civil disorder. The police involved in the shooting were wearing body cameras, but the footage is not being released while the case is under investigation (SL Tribune, Feb. 29). There are rumors that cell phone footage may exist, but none has yet been made public.
The rally on Feb. 29 was the largest in Salt Lake City in some time. The hundreds in attendance represented a broad cross section of the city’s working class, including oppressed communities. The gathering listened as family members gave eyewitness accounts of the shooting.
Other families who had also experienced the loss of a loved one to a killing by police shared their painful stories. They recalled the names of other victims of police brutality in Utah, such as Darrien Hunt and Corey Kanosh.

Hunt was killed in Saratoga Springs, Utah when he appeared wearing a comic-book costume that including a toy gun in September 2014. Kanosh, a member of The Kanosh Band of Paiutes, was an unarmed passenger of a DUI suspect. When Kanosh fled, cops pursued him across a field and shot him down. Left unattended for a half hour, he died of his wounds. (Indian Country Today, Jan. 13, 2015)

One of the rally’s organizers, Gregory Lucero, a member of Utah Against Police Brutality, spoke, noting that the community had already been organizing around the demand for an independent democratically elected police review board to replace the failed mayor’s appointed civilian review board.

Lucero said Mohamed’s shooting bore out the people’s feeling that the police can no longer be left to investigate each other and that the community must have authority over the police. He marked the day as a time to consider more deeply the long history of the police as upholding and carrying out systems of oppression when he told the crowd, “The police began as those who were sent out to capture fugitive slaves,” and observed that they continue to fulfill a similar role today.