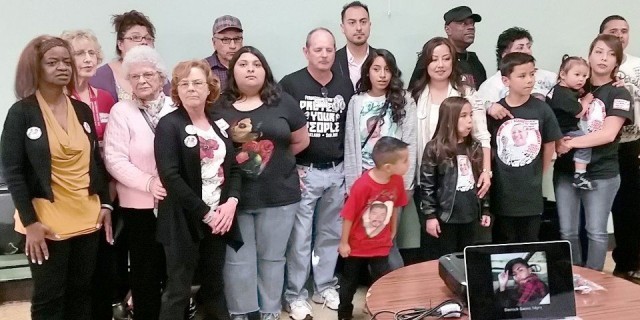 San Jose, Calif. — There was a packed house at the African American Community Service Agency, the gathering place of families with one common cause, on Feb. 20. Families with “Uniting Voices Against State-Sponsored Violence” came together to share their grief and anger at the loss of their loved ones at the hands of the police. Together with their families, friends and supporters, they heard each other testify about their lost loved ones.

There was also a panel, which addressed some of the questions and issues related to the circumstances that allow police forces across the country to kill Black and Brown people with such callous impunity. Panel members included Cat Brooks from the Anti Police-Terror Project; Tiny (Lisa Gray-Garcia) of Poor Magazine; Charles Fowler, a high school teacher in East Side San Jose and supporter of a youth collective called San Jose Regeneration Against Destruction or R.A.D.; Alexandria Peal Armstrong, a high school senior and member of R.A.D.; and Gail Noble of Silicon Valley DE-BUG’s Albert Cobarrubias Justice Project.

The event was organized by Laurie Valdez of Justice for Josiah, R.A.D., Silicon Valley DE-BUG and Cephus “Uncle Bobby” Johnson’s Love Not Blood Campaign. The closing included a beautiful release into the night of lanterns for each lost family member.