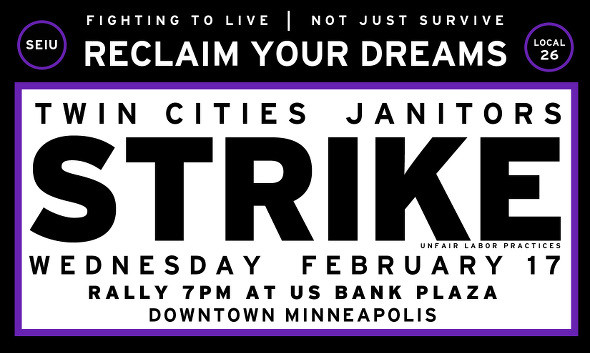 Thousands of Twin Cities janitors, members of Service Employees Local 26, held picket lines outside the places they normally clean on Feb. 17. Working without a contract since December, the workers are demanding an immediate pay raise for both full-time and part-time janitors to $15 an hour as well as limits to an “ever-­increasing workload.”

Inspired by Local 26, hundreds of nonunion janitors, mostly immigrants hired by contractors to clean stores like Macy’s, Kohl’s and Sears, protested the next day for fair wages and better working conditions. In addition to picketing stores where they work, some protesters blocked traffic leading to downtown Minneapolis to ­demand an end to racial and economic disparities in Minnesota. (minnesota.cbslocal.com, Feb. 17 and 18)

When Pittsburgh-based defense contractor Allegheny Technologies Inc. and four subsidiaries locked out 2,200 members of the Steelworkers union (USW) at 12 plants in six states on Aug. 15, it violated federal labor laws, according to a 31-page complaint written by Region 6 of the National Labor Relations Board on Feb. 11. ATI was cited for more than 20 instances of bargaining in bad faith, illegally interrogating workers and threatening to fire workers who went on strike. The ­complaint was based on unfair labor practice charges filed by the USW in early 2016.

Steelworkers President Leo W. Gerard praised the citation: “The company has, since day one, engaged in a pattern of intimidation, manipulation and bad faith bargaining in a blatant attempt to force hardworking people into accepting deep cuts in pay and benefits.” The complaint will be heard by an NLRB administrative law judge on May 23. (usw.org, Feb. 12; cantonrep.com, Feb. 12)

Stay tuned. This case has precedent-setting potential since many companies have resorted to lockouts to curtail strikes in the recent period.

Despite a 2013 ballot referendum setting the legal minimum wage for transportation and hospitality workers in SeaTac, Wash., at $15 an hour, an estimated 1,500 airport workers, out of 5,000, are still being paid below the legal minimum. Workers at Seattle-Tacoma International Airport, including janitors, baggage handlers, cleaners, refuelers and others, filed class action suits Feb. 17 against more than a dozen employers. The suits accuse the employers of illegally withholding amounts as high as $20,000 per worker since the minimum wage was raised over two years ago. (It was later adjusted for inflation to $15.24 by a city ordinance.) One lawyer representing the workers estimates that the total withheld, including benefits and overtime pay, is as high as $62.5 million.

According to attorney Duncan Turner, though many wage-theft victims have come forward to demand justice, “We talked to a lot of people who were just too afraid” of losing their jobs. (Associated Press, Feb. 17)

The Steelworkers union in the U.S. and Los Mineros in Mexico filed complaints Feb. 18 accusing Mexican mining conglomerate Grupo Mexico and its U.S. subsidiary, Asarco, of violating workers’ rights on both sides of the border. The unions asked the U.S. National Contact Point for the Organization for Economic Cooperation and Development Guidelines on Multinational Enterprises to foster dialogue between the parties. Though the specific terms of the complaint are confidential, the USW has accused Tucson, Ariz.-based Asarco of multiple unfair labor practices, including threatening workers, unlawfully implementing changes in workplace conditions and failing to negotiate with the USW and seven other unions at its five U.S. facilities. The National Labor Relations Board has scheduled a hearing on the complaints for March 15.

More than 2,000 USW members in Asarco’s copper mines, smelter and refinery in Arizona and Texas have been working without a contract since June 2013. Even though Asarco’s net income was $1.5 billion in 2013 — Grupo Mexico’s net income was $1.7 billion in 2013 — Asarco seeks to divide the workers by offering lower benefits to new employees. The USW, the other U.S. unions and Los Mineros have united against that and other changes. On Dec. 1, Asarco implemented portions of their so-called “last, best and final offer,” changing the workers’ compensation and benefits without their agreement.

The filing comes as workers marked the 10th anniversary of an explosion at the Grupo Mexico mine at Pasta de Conchos in the state of Coahuila that killed 65 workers. The bodies of 63 of those miners remain trapped underground. Representatives of the USW marched with Los Mineros members in Mexico City on Feb. 19 to demand recovery of the bodies, compensation for the families of the victims, and prosecution of responsible company and government officials. The two unions have had a ­strategic alliance since 2005. (usw.org, Feb. 18) To demand that Asarco/Grupo Mexico offer a fair contract to the workers, sign the petition at tinyurl.com/jigqsep.