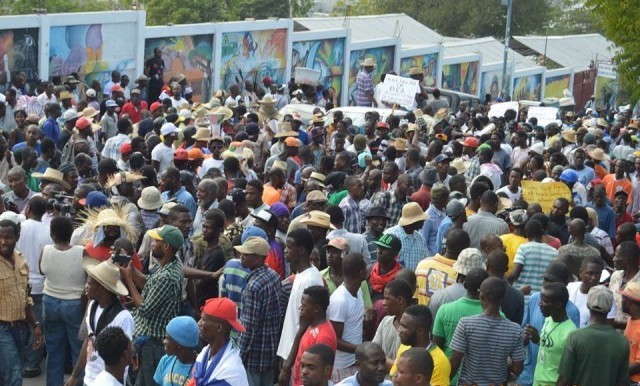 Whereas, in December 2003 the San Francisco Labor Council sent greetings of solidarity on the occasion of the 200th anniversary of the Haitian Revolution, “which abolished slavery and ended colonial rule in Haiti — an earth-shattering development in the struggle for the emancipation of labor all over the world.”

Whereas, on Feb. 29, 2004, the U.S., French and Canadian military overthrew the elected government of Haiti, abducting President Jean-Bertrand Aristide and flying him to exile in Africa on a U.S. military plane. The SFLC passed a resolution on March 8 demanding “an investigation into the Bush administration’s role in the coup” and “the immediate release of Aristide” and his “restoration as the democratically elected President of Haiti.”

Whereas, the SFLC initiated the Labor/Religious/Community Fact-Finding Delegation which visited Haiti in April and May of 2004. The delegation concluded that the coup had led to serious attacks on Haiti’s trade unions, deterioration in living conditions, and a wave of killings, jailings and persecution directed at those associated with the popular movement.

Whereas, in 2015, after being excluded for 11 years, Aristide’s Lavalas party was finally able to run candidates again, headed by presidential standard-bearer Dr. Maryse Narcisse. However, the Aug. 9 and Oct. 25 “first-round” elections were marked by massive voter suppression, ballot stuffing, vote buying, armed coercion and naked vote rigging all the way from polling places to final tabulation. National police and paramilitaries fired automatic weapons into working-class areas to discourage the vote, killing scores of people. (Report of the Human Rights & Labor Fact-Finding Delegation to Haiti, November 2015)

Whereas, despite a mountain of evidence documenting the fraud – which has given the lead position to the party of Haitian President Michel Martelly – the U.S. government has endorsed the elections. The U.S. paid $31 million to finance the elections, plus $2.8 million to the National Police to fund its election duties.

Whereas, the defiant Haitian people have mounted huge demonstrations and marches throughout the country to protest the stolen elections, over many months, involving tens of thousands of people in the street, demanding that their votes be counted and the stolen elections thrown out. They have been shot down, tear gassed, beaten and some have been killed. Yet they have come back the next day, denouncing what they call an “electoral coup.” Fanmi Lavalas, long the most popular political party in Haiti, has filed legal challenges. Still, the State Department and the U.N. occupying force continue to push the electoral coup forward.

Therefore be it resolved, that the San Francisco Labor Council stands in solidarity with the people of Haiti and their inalienable right to self-determination, including the right to freely choose their representatives through fair elections free of coercion or intimidation. We support the Haitian people’s demand for invalidation of the demonstrably fraudulent Aug. 9 and Oct. 25 elections, and for an end to U.S. support for this “electoral coup.”

And be it further resolved, that we support the Haitian people’s demand for an end to U.S. financing of police and paramilitary forces, who have been terrorizing peaceful demonstrators. Haiti’s poor majority is marching for their votes to be counted, and for their country to be free from foreign intervention and control.

And be it finally resolved, that we contact our elected representatives and urge them to call a halt to the U.S. government policy of supporting electoral fraud and police terror in Haiti and of interfering with the democratic process in that country.