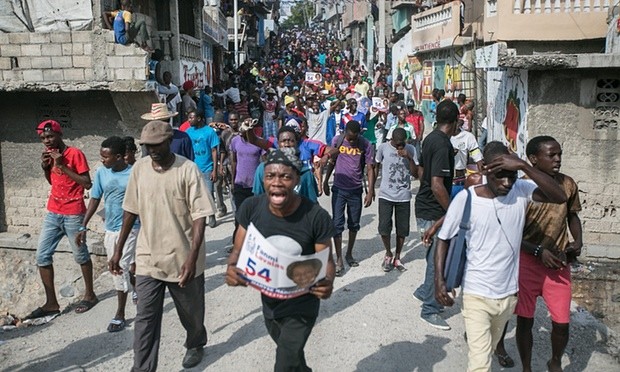 In the first week of February, tens of thousands of Haitians, both in Port-au-Prince, the capital, and other major cities, poured into the streets to tell President Michel Martelly to get out. They were not going to allow him to extend his hold on power by a single day past Feb. 7.

February 7 was the 30th anniversary of the Haitian people’s uprooting of the dictatorial regime of Jean-Claude Duvalier. In 1986, they forced the dictator to drive his fancy car into a U.S. aircraft and fly to the French Riviera. The U.S. role has been up close and ongoing since even before U.S. Marines landed in Haiti in 1915. Last year was the 100th anniversary of that direct U.S. military and political intervention into Haiti’s internal affairs.

On Feb. 5, heavily armed men dressed in old Haitian army uniforms began riding pickups and trucks through the streets of Port-au-Prince, Les Cayes and other cities. In the capital they fired at protesters demanding the immediate departure of Martelly.

Answering this vicious attack from pro-Martelly forces, protesters threw rocks, killing a former soldier, and drove away the gangsters, who retreated quickly, leaving their dead colleague in the roadway. Neither the soldiers of Minustah, the United Nation’s occupation force in Haiti, nor the Haitian National Police made any attempt to control these paramilitary gangs attacking protesters. (Haiti Elections blog, Feb. 9)

The day before he left office, Martelly announced a deal with the leadership of Haiti’s parliament. According to the deal, within five days parliament will select a provisional president, who will in turn select a prime minister and a head of the electoral commission. A runoff between the top two candidates from the 2015 presidential elections will take place April 24, with definitive results announced May 6.

The U.S. State Department and the Core Group, which represents Canada, France and Brazil and includes representatives from the Organization of American States and the U.N., immediately endorsed this “solution” to Haiti’s electoral crisis. Washington and the European Union issued another call to accept this deal on Feb. 12.

Haiti’s moderate opposition, based in a group called G-8, which consists of some of the major presidential candidates and their parties, condemned this agreement. They pointed out that last Aug. 9’s parliamentary elections were neither fair nor free. With a third of those parliamentary seats still undecided, it was ridiculous to accept the Oct. 25 presidential elections as fair and free.

The more radical opposition, including Fanmi Lavalas, is calling for the head of the Cour de Cassation (Supreme Court) to be appointed interim president and for holding completely new, fair and free elections for parliament and president.

Most Haitians don’t have a secure job, one with a paycheck and benefits. This makes real unemployment rates a guessing game.

The World Food Program, a U.N. agency, just released a report Feb. 9 estimating that 3.5 million Haitians are “food insecure,” a euphemism meaning they often go hungry. It further estimates that 1.5 million of them are “extremely food insecure,” which means they almost always go hungry.

Although 50 percent of Haitians are farmers, Haiti has to import 60 percent of its food. With inflation at 11 percent annually and the gourde, Haiti’s currency, dropping in value compared to the U.S. dollar, the cost of food in Haiti is rising fast. And due to the weather phenomenon called El Niño, farmers in many parts of Haiti are facing the loss of their third crop in a row due to drought.

In the midst of Martelly’s succession crisis, a conference in Port-au-Prince on Feb. 4 of “patriotic” political parties and groups, mainly left-wing and in the struggle, demanded in their final statement an “urgent measure to satisfy the immediate economic demands of the popular masses,” which addressed the high price of basic necessities. (Haïti-Liberté, Feb. 10)

U.S. imperialism and its minions in Haiti want to impose their own candidate. But they don’t want to be as obvious as then-Secretary-of-State Hillary Clinton was when Washington imposed Michel Martelly in 2011, so they are working through an interim president. But the Haitian people suffered through Martelly, and are hungry for justice, democracy and a better standard of living.