We reprint this article, written on Feb. 9 by Manlio Dinucci, the military analyst for the Italian newspaper Il Manifesto, about U.S.-NATO forces increasing pressure in the East against Russia and planning yet another invasion of Libya in Africa. 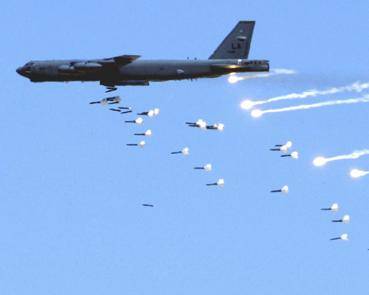 Participating (as is now required) in the meeting of European Union defense ministers on Feb. 5 in Amsterdam, NATO Secretary General Jens Stoltenberg praised U.S. “plans to substantially increase their military presence in Europe, by increasing four times the amount they spend on military presence in Europe, so they can fund more troops in the Eastern part of the Alliance, so they can finance the prepositioning of heavy equipment, tanks, armored vehicles and other kinds of heavy equipment. And also more exercises and more investments in infrastructure.” In this way, according to Stoltenberg, “EU-NATO cooperation is reinforced.” [nato.int, Feb. 5]

But it had a very different purpose. Immediately after the end of the Cold War in 1992, Washington emphasized in a “white paper” on military strategy, the fundamental importance to preserve the NATO military alliance as the channel of U.S. influence and participation in European affairs, preventing the creation of solely European arrangements that would undermine the command structure of the alliance — that is, the U.S. command.

Mission accomplished: Twenty-two of the 28 EU countries, with more than 90 percent of the EU population, are now part of NATO under U.S. command, which the EU recognizes as the foundation of collective defense. By pressuring East European governments, which are closer to the U.S. than to the EU, Washington has been able to reopen a new Cold War on the eastern front, breaking growing Russia-EU economic ties that are dangerous to U.S. interests. Throughout Eastern Europe, on the highest flagpoles, the stars and stripes banner is now waving, along with that of NATO.

In Poland, new Prime Minister Beata Szydlo has held his press conferences with the flag of the EU lowered. Indeed the EU flag has often been burned in the streets by “patriots” who support the government’s refusal to host refugees (who were forced out of their homelands by U.S.-NATO wars), calling them “non-white invaders.” While they prepare for the NATO Summit, set in Warsaw in July, Poland plans to establish a joint brigade of 4,000 soldiers along with Lithuania and Ukraine (which are already in NATO), trained by U.S. forces.

In Estonia the government announced a military “Schengen Area,” which allows U.S.-NATO forces to freely enter the country. [The Schengen Agreement allows movement of people inside the EU.]

On the southern front, connected to the east, the United States is about to launch a new war from Europe to occupy the economically and strategically important coastal zone in Libya, with the pretext of liberating this region from the Islamic State group, also called ISIS.

This is a move to regain ground, now that the Russian intervention in Syria in support of government forces has blocked U.S.-NATO plans to demolish the Syrian state, using, as they did in Libya in 2011, groups like ISIS and al-Qaida, armed and trained by the CIA, funded by Saudi Arabia and supported by Turkey and others.

The operation in Libya “under Italian management” that the Pentagon warned would require “boots on the ground” — that is, ground forces — has come from an agreement of the U.S. not with the EU, which does not exist in this arena as a unified entity, but individually with the dominant European powers, especially France, Britain and Germany. These powers are in competition with each other and with the United States, but they join together when their fundamental [imperialist] interests are at stake.

What was revealed recently in a 2011 email to Hillary Clinton, [from Sidney Blumenthal, Clinton’s adviser] when she was secretary of state, was emblematic of the policy toward Libya: The U.S. and France attacked Libya primarily to block Gadhafi’s plan to use the huge Libyan gold and silver reserves to create an African currency as an alternative to the CFA franc. The CFA franc is the currency set by France in its 14 former colonies. The Libyan plan [which Dinucci wrote about in Il Manifesto newspaper in April 2011] sought further to free Africa from the domination of the International Monetary Fund and World Bank. For that reason Libya was destroyed, and the same forces that destroyed Libya are now preparing to invade Libya to bring “peace.”