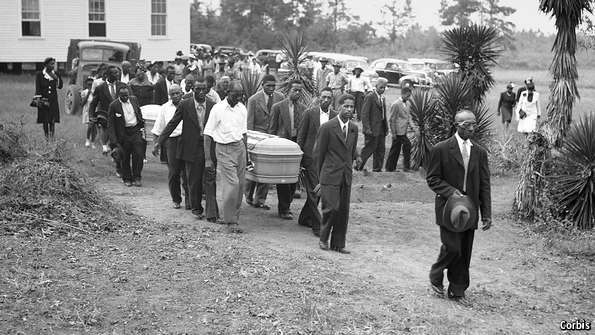 One of the most outrageous and well-publicized lynchings in U.S. history took place on July 25, 1946, when two African-American couples were brutally killed by a white mob in Monroe, Ga., near Moore’s Ford Bridge. George W. Dorsey and Mae Murray Dorsey, along with Roger Malcolm and Dorothy Malcolm, all in their 20s, were employed as sharecroppers on the land of a white man named J. Loy Harrison.

Two weeks earlier, Roger Malcolm allegedly stabbed in self-defense a white man named Barnette Hester, who was employed on the Harrison farm. Malcolm spent nearly two weeks in jail, but was released after Harrison paid his bail. Harrison drove Dorothy Malcolm and the Dorseys to pick up Malcolm when they were allegedly hijacked by a lynch mob who killed both couples.

The Malcolms and Dorseys rode with Harrison from the local jail in Walton County where Monroe is located, ostensibly returning to the farm where they worked. Harrison claimed that he was stopped by a group of 15 to 20 men who first ordered the African-American men out of the vehicle and later took the women into custody.

The racists tied the four people to trees, beat them severely and shot them to death while Harrison stood by in silence, he claimed. Mae Murray Dorsey was seven months pregnant at the time of the lynching.

This cold-blooded, calculated slaughter was carried out after World War II during a wave of such killings throughout the South. George W. Dorsey had been out of the Army for nine months when he was murdered by the lynch mob.

Despite a nationwide outcry demanding justice, no one was ever indicted for murder or violating the couples’ civil rights. A large number of FBI agents were sent to Monroe to investigate the lynching, take statements from potential witnesses and collect material evidence.

Then-Georgia Gov. Ellis Arnall stated, “15 to 20 of the mob members are known by name.” (Atlanta Daily World, Dec. 4, 1946) Evidence collected from the investigation was delivered to the grand jury by U.S. District Attorney John P. Cowart and John Kelly, who were employed by the Department of Justice’s Criminal Division.

Judge Davis “pointed out that federal courts have no jurisdiction over the offense of murder except under well-defined conditions.” (ADW, Dec. 5, 1946) The federal court, White House and the FBI said there was insufficient evidence to file charges against the 20 to 30 white men involved in the murders. One man who testified before the grand jury was charged with perjury for providing false information about his location at the time of the lynching.

The Dorseys and Malcolms had worked on the plantation where they were subjected to slave-like conditions after an imperialist war that ostensibly was designed to end racial oppression and legal impunity. Although Dorsey served overseas in the military for five years during WWII, he could only find work as a field hand after returning to the South.

Some 2.5 million African-American men registered for the draft between 1941 and 1945, along with more than 6,000 Black women who volunteered for segregated units in the Army and the Navy. After experiencing racism in the military while deployed in the U.S., Europe, Africa and the Pacific, many veterans were not willing to accept legalized segregation and racial exploitation on their return to civilian life.

A more militant political mood was evident in the South and other regions of the U.S. that began during the war and extended into the late 1940s and early 1950s. This discontent with the status quo prompted violent retribution by white racists who dominated law enforcement, agricultural production, business and public service.

Another highly publicized racist attack occurred earlier on Feb. 12, 1946, against a recently returned African-American war veteran. The website Today in Civil Liberties History reads, “Hours after being discharged from the Army following World War II, Sgt. Isaac Woodard was taken from a bus in Batesburg-Leesville, South Carolina, beaten and blinded by police and then jailed. Reports of the brutal incident aroused national outrage.”

The African-American press captured the exploitative and repressive conditions in the post-WW II period; it was filled with accounts of police beatings, killings and mob violence. In 1948, the Dixiecrat Party arose, a splinter from the Democratic Party that was bitterly opposed to even minimal reforms granting civil rights to the formerly enslaved oppressed nation.

The powerful book “We Charge Genocide” was published by the Civil Rights Congress in 1951 as a petition to the United Nations. Attorney William L. Patterson, its main author, writes about the social atmosphere after WWII and the beginning of the Korean War: “Now there is not a great American city from New York to Cleveland or Detroit, from Washington, the nation’s capital, to Chicago, from Memphis to Atlanta or Birmingham, from New Orleans to Los Angeles, that is not disgraced by the wanton killing of innocent Negroes. It is no longer a sectional phenomenon.”

Patterson also reports, “Once the classic method of lynching was the rope. Now it is the policeman’s bullet. To many an American the police are the government, certainly its most visible representative. We submit that the evidence suggests that the killing of Negroes has become police policy in the United States and that police policy is the most practical expression of government policy.”

In the 1990s, interest in the 1946 lynching of the Dorseys and Malcolms resurfaced. Demands were made to reopen the investigation into the killings. Nonetheless, these efforts did not result in the filing of criminal charges against any living participants in the murders.

Every year a re-enactment of the lynching is staged to continue to keep this horrendous crime in the minds of African Americans and their allies.

This pattern continues today as police and vigilantes routinely gun down African Americans with impunity. In the overwhelming number of cases, no one has been held accountable.

In most cases, local law enforcement agencies, courts and the federal government have proved incapable of prosecuting those who engage in racist violence against the oppressed. The Justice Department has admitted that it does not accurately document police killings and the racism involved.

The British Guardian’s website documents police killings of 1,140 people in 2015. A significant and disproportionate number of these victims were African Americans.

Mass demonstrations and urban rebellions against the unjustified use of lethal force by the police have accelerated since the vigilante killing of Trayvon Martin in Florida in 2012 and the police shooting of Michael Brown in Missouri in 2014.

Nonetheless, organized and racist state violence against the nationally oppressed will not end until there is a structural transformation of the capitalist system. Violence and repression against the oppressed and working people are designed to maintain capitalism and imperialism.