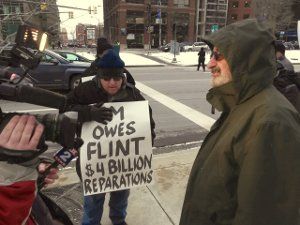 Moratorium Now! holds GM responsible for impoverishing Flint, Mich., by closing most of its plants in the city where GM was founded 108 years ago, eliminating 72,000 out of 80,000 jobs. Since 1979, GM has closed over 170 plants, the majority of them in Michigan and 24 of them specifically in Flint’s Genesee County. The selective closings by a company with a history of racism have devastated majority-Black Michigan cities like Detroit, Pontiac, Saginaw and Flint. GM is complicit in the environmental racism that has left 100,000 people without safe drinking water. Signs called on GM to pay reparations to the people of Flint.

GM is also responsible for polluting the Flint River with its toxic waste over the past century. The lead poisoning in Flint came about after the city began drawing its water, which was highly corrosive, from the river and then failed to add anti-corrosive phosphates. This corroded the pipes, allowing lead to leach into the water supply.

The demonstration was announced Feb. 3 after GM reported its earnings for 2015: an all-time record high of $9.7 billion after paying taxes and interest. A leaflet pointed out GM’s wanton disregard for public safety, going back to the 1920s when GM’s major shareholder, DuPont, developed leaded gasoline to make GM’s engines run smoothly — and knock out competition from Ford. More recently, when GM realized the Flint River water was corroding its engine parts, the company arranged for an alternate water source but did not voice concern about the probable danger that the same water posed to public health.

While Detroiters were protesting GM, dozens were demonstrating outside Gov. Rick Snyder’s swank new condo in Ann Arbor, Mich. Others were demonstrating at the state Capitol in Lansing. University of Michigan students held a march even after an event featuring Snyder was cancelled over fear of protests. “Flint Lives Matter” is becoming a rallying cry in the struggle for justice for Flint’s people.