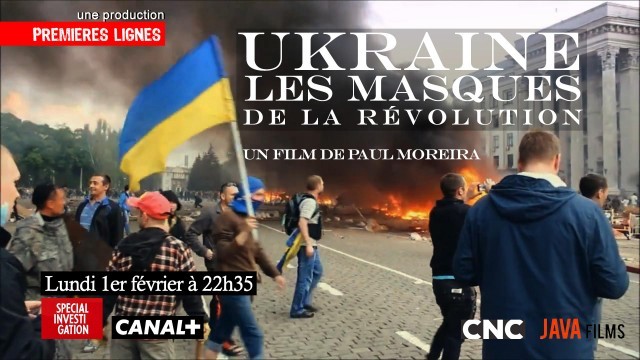 For the first time, the role of fascist politicians and neo-Nazi gangs in the 2014 U.S.-backed coup in Kiev has reached a mass audience in the West with the Feb. 1 broadcast of journalist Paul Moreira’s documentary “Ukraine: Masks of the Revolution” on the French Canal+ television network.

The 55-minute film shines a bright light on the massacre carried out by ultra-right forces at the House of Trade Unions in the multinational port city of Odessa on May 2, 2014, where at least 48 anti-fascists and trade unionists were brutally murdered.

One of the film’s great strengths — though it makes for difficult viewing — is that it allows the neo-Nazis and supporters of the Kiev regime to indict themselves through interviews, juxtaposed with footage shot at the scene.

Paul Moreira wrote on his blog Jan. 30: “Over 40 people were killed in a huge fire in the heart of a major European city in the 21st century. Everything was filmed by dozens of cameras and cell phones. Yet around me, no one remembered. … It had been addressed, discussed, but never investigated.

“Why no investigation? Probably because the victims were Russian speakers.” (English translation at website The New Cold War: Ukraine and Beyond)

Moreira also lets anti-fascists give their perspective — something they are denied in Ukraine where their views are banned and criminalized.

Among those interviewed are Fatima Papura, mother of Vadim, a teenager and member of the Communist Youth who was the youngest victim of the May 2 massacre; and Alexey Albu, former Odessa Regional Council deputy and a leader of the revolutionary Marxist organization Union Borotba (Struggle), who survived the massacre and was subsequently forced into exile.

Though focused on the Odessa events, Moreira’s film also exposes the role of the Western imperialist powers, especially the United States, in the February 2014 coup in Kiev. Shown is the collaboration of U.S. and European Union officials with known fascists in overthrowing the legally elected government of President Victor Yanukovich.

The film’s broadcast outraged the Ukrainian regime headed by oligarch President Petro Poroshenko. Ukrainian officials and the French capitalist newspaper Le Monde tried unsuccessfully to have Moreira’s film pulled before broadcast. Since then, a campaign of slander has been waged to discredit the director and the anti-fascists he interviewed.

Complete English- and Russian-dubbed versions appeared online after the French broadcast. Both were immediately censored by YouTube.

As of Feb. 8, the full film is available with English subtitles on LiveLeak.com. (tinyurl.com/zspzppa or search “Ukraine Masks of Revolution”)

The film’s broadcast marks an important breakthrough against the two-year conspiracy of lies and censorship by Western media and governments denying or ignoring the role of armed neo-Nazis and right-wing nationalists in Ukraine’s so-called “revolution of dignity.”

Their rise to power led to war against the mainly Russian-speaking Donbass region, formerly part of eastern Ukraine, where at least 10,000 people have been killed.

Washington and the EU continue to provide money, arms and political cover for both the Poroshenko government and the neo-Nazis while expanding the NATO military alliance to Russia’s western border.

The war against Donbass continues today, and the threat of a wider outbreak of war hangs over the heads of Donbass residents, who voted for independence in a popular referendum in May 2014. Today the crisis is heating up again.

On Feb. 5, First Head of the Donetsk People’s Republic Alexander Zakharchenko stated, “The number of attacks [by Ukrainian forces] has increased tenfold. … Judging by what is going on, Ukraine is preparing a full-scale provocation. We are waiting. We are ready.” (DONi News)

Regular readers of Workers World will recognize the name of Alexey Albu, the Borotba coordinator exiled from his hometown after the May 2014 massacre. WW has recently published interviews conducted by Albu with women fighters of the Ghost Brigade anti-fascist militia.

Albu currently lives in the Lugansk People’s Republic where he helps to coordinate the economic development and social welfare programs of the Ghost Brigade. He was interviewed in “Ukraine: Masks of the Revolution” about the Odessa massacre, and has come under vicious attack from Kiev’s propagandists seeking to discredit the documentary.

On Feb. 4, Albu released a statement: “All my life I’ve been a supporter of left-wing and progressive ideas, based on non-discrimination against people on the grounds of nationality, race and sexual, cultural or ideological grounds.

“Paul Moreira managed to accurately convey the atmosphere of fear and powerlessness prevailing today in Ukraine. … The film shows the truth that the Ukrainian authorities try so carefully to hide.”

Though these same charges were made and publicly refuted in Ukrainian- and Russian-language media long before the release of Moreira’s documentary, today they’re being uncritically published by Western media attempting to undermine the film’s impact.