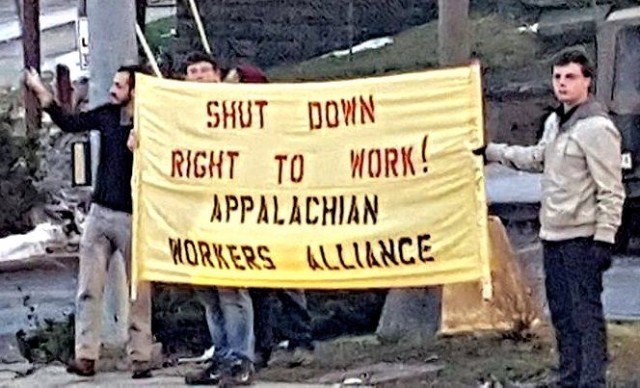 Rallies were held in three cities across West Virginia to fight the “right-to-work” (in unsafe conditions for less) legislation passed by the state House on Feb. 4. The bill goes next to the governor’s desk, where it is expected to be vetoed. The Republicans, however, have the power to override the veto.

Called by the Service Employees union (SEIU-1199), the rallies took place on Feb. 1 and Feb. 3 in Huntington, Morgantown and Parkersburg. They were attended by community supporters as well as members and staff of SEIU-1199, SEIU/NCFO-32BJ, United Steelworkers Local 8-957, Food and Commercial Workers Local 400 and the American Federation of State, County and Municipal Employees. Activists from such organizations as the Appalachian Workers Alliance, Marshall University Native American Students Association and Left Alliance at West Virginia University also participated.

Another anti-worker initiative to repeal the prevailing wage was also passed by the legislature. It will likely be vetoed by the governor and overridden by the Republicans as well.

Some recent words and actions of right-wing state legislators have deeply offended working people. Sen. Robert Karnes fantastically claimed that West Virginia workers’ wages were “too high because of prevailing wage.” This ultra-reactionary senator previously stated that union workers who protested at the Capitol were “free-riders.”

Senate President Bill Cole, who is running for governor, spent the last weekend in January at a Palm Springs, Calif., resort, where he spoke at a retreat of about 500 high-spending donors. Organized by right-wing mega-donors Charles and David Koch, the annual retreat is hosted by the Freedom Partners Chamber of Commerce, a nonprofit affiliated with the Koch brothers, which requires an annual membership fee of $100,000.