The imperialist states and their allies have committed egregious war crimes and crimes against humanity, such as the destruction of Iraq, Syria, Libya, Yemen, Sudan, etc. These crimes have displaced 60 million people, creating the greatest number of refugees and internal and external migrants since the end of World War II. Despite these crimes, none of the imperialist leaders has been investigated or prosecuted by the ICC.

From an historical perspective, out of all the former slave-trading and colonial states, including the U.S. and many NATO countries, none has paid reparations to its former subjects. Nor have any been held legally accountable for centuries-long crimes that reaped billions in profits and resulted in the deaths of hundreds of millions. 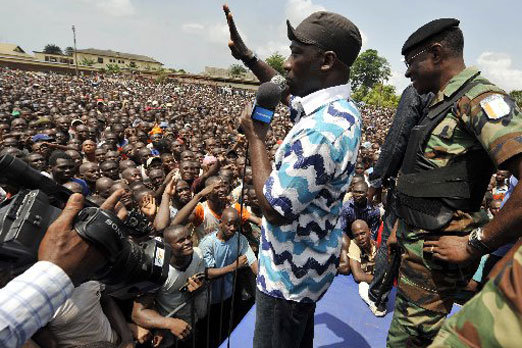 Ivory Coast’s Minister of youth and employment and leader of the “young patriots” Charles Ble Goude in front of thousands of young supporters of Ivory Coast President Laurent Gbagbo, March 21, 2011 in Abidjan.

The Gbagbo administration made numerous efforts to resolve disputes surrounding the 2010 national elections. Nonetheless, Paris, with the backing of Washington and its allies in the regional Economic Community of West African States, rejected peace overtures and a recount of the vote.

The imperialists and their allies in Ivory Coast were determined to remove Gbagbo and his political party from power. Consequently, they went to great lengths to stage the coup that installed Ouattara. At present the West hails Ivory Coast as a success story, since the imperialist countries have been able to make a deep penetration of its economy.

Gbagbo has pleaded not guilty to four serious charges, including murder and rape, allegedly carried out by his supporters under his directives. These occurred during clashes that resulted in 3,000 deaths after disputes surfaced over the 2010 presidential election results. ICC prosecutors in their opening arguments on Jan. 28 told the court that Gbagbo unleashed violence against his supporters in order to remain in office.

Lawyers for the defendants, who include former first lady Simone Gbagbo and youth leader Charles Ble Goude, are emphasizing the role of France in Ivory Coast’s inability to resolve its own internal problems. They argue that French military operatives arrested the former president in a makeshift residence and this poses a challenge to the character of the ICC, which is based at The Hague.

Simone Gbagbo was tried in 2014 and sentenced to 20 years in prison by Ivorian authorities under Ouattara. No members of Ouattara’s Rally of the Republicans party have been indicted by the ICC or Ivory Coast prosecutors.

Gbagbo supporters in Ivory Coast and internationally have pointed out the bias of the proceedings. After the isolation and arrest of Gbagbo, his spouse and other key leaders in April 2011, Western nations immediately recognized Ouattara as the “legitimate head of state” in Abidjan. This same policy continues, even though Gbagbo retains tremendous support inside Ivory Coast.

At the opening of the trial, hundreds of members and friends of Gbagbo were at the court. Many wore shirts with Gbagbo’s image, calling for his release from prison in the Netherlands.

In the same article, attorney Naouri emphasized, “Gbagbo will never be able to shed the image of an anti-French nationalist that has been stuck to him by supporters of Alassane Ouattara. The French establishment will never accept him.”

Gbagbo began his career as an academic, having earned a Ph.D. in history. He was banned from his teaching post and imprisoned in 1971 for supposedly lecturing in a “subversive” manner.

Left-wing ideologically, he became a trade union organizer among educators during the 1980s. Gbagbo opposed the first Ivorian leader, President Felix Houphouet-Boigny, a protégé of French neocolonialism who ruled the country for three decades.

Gbagbo helped form the Ivorian Popular Front in 1982 and was exiled to Europe the same year. He returned in 1988, only to be imprisoned again in 1992. Gbagbo took power through an electoral process accompanied by a popular uprising in 2000. He ruled the country until he was overthrown on April 11, 2011.

This trial comes amid growing controversy within the African Union and other nongovernmental forces over the character of the ICC and its sole preoccupation with the kidnapping and persecution of African leaders. Gbagbo is the highest-ranking political official to be tried by the court, which was established through the Rome Statute treaty in 2002.

An ICC case against Kenya’s president, Uhuru Kenyatta, collapsed in 2015 after the defense effectively challenged the credibility of witnesses against him. However, his vice president, William Ruto, is still embroiled in a legal battle with court prosecutors, led by Gambian national Fatou Bensouda.

Kenyatta was actively opposed by the U.S. and Britain when he won the elections in 2013. Both the British and U.S. governments, under Prime Minister David Cameron and President Barack Obama, respectively, leveled threats against Kenya, saying there would be consequences if Kenyatta won the poll.

At the 50th anniversary AU Summit in Ethiopia in May 2013, widespread criticism of the ICC and its failure to recognize the sovereignty of African states prompted calls for the AU to withdraw from the Rome Statute. Numerous African states have not signed the agreement and consider themselves not bound by its conventions.

Although the U.S. and some European imperialist states do not recognize the supposed authority of the ICC, Western capitals use the court as a tool of the foreign policy imperatives of Washington, London, Paris and Brussels. In Libya, for example, when the Pentagon, the CIA, NATO and their allies sought a legal rationale for the massive bombing of the North African state in 2011, the ICC rapidly indicted Libyan leader Col. Moammar Gadhafi, members of his family and other officials.

According to the Feb. 1 Guardian newspaper, referring to the 26th Ordinary AU Summit held on Jan. 30-31, “Members of the African Union have backed a Kenyan proposal to push for withdrawal from the International Criminal Court, repeating claims that it unfairly targets the continent. Chad’s president, Idriss Déby, who was elected African Union chairman at the two-day summit in Addis Ababa, criticized the court for focusing its efforts on African leaders.”

Deby said, “Elsewhere in the world, many things happen, many flagrant violations of human rights, but nobody cares.” Of the nine countries targeted by the ICC, only one is not in Africa: Georgia, a nation that was part ofthe former Soviet Union.