Zika, a mosquito-borne virus, is spreading quickly in 33 countries. The virus was identified in Brazil for the first time last May and is suspected of being responsible for an explosive rise there in infants born with microcephaly, a neurological disorder that causes abnormally small brains and heads and mental disabilities. 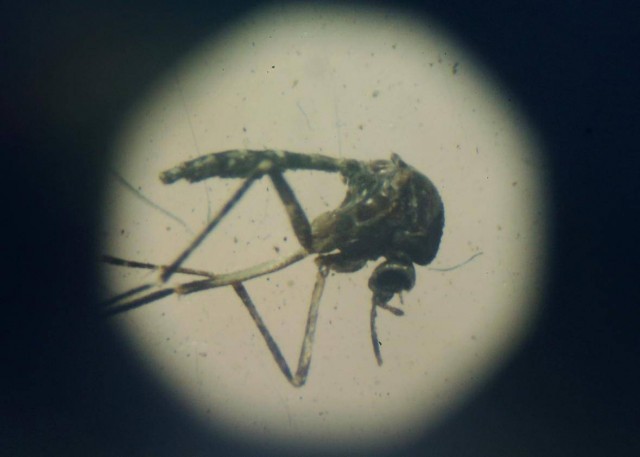 The Zika-carrying mosquito, Aedes aegypti, is in the same family with mosquitoes that can carry yellow fever, West Nile virus, chikungunya and dengue fever. So at first doctors were relieved that Zika appeared to be benign. Only 20 percent of those infected show any of its mild flu-like symptoms: fever, rash, headaches, muscle aches and red eyes. Once infected, the incubation period is likely to be only a few days and symptoms last less than a week, after which a person has developed immunity to the virus.

Since its outbreak however, evidence has mounted that the Zika virus may cause microcephaly in infants born to women infected during pregnancy. Children with microcephaly who survive birth can face a lifetime of symptoms such as mental disability, seizures, hyperactivity, short stature, delayed motor and speech functions, facial distortions, balance and coordination problems.

Scientists now fear Zika may also be associated with a rise in Guillain-Barré, a syndrome caused by any of several microbes in which the immune system attacks the nervous system.

On Feb. 1, the World Health Organization called Zika “a public emergency of international concern,” putting it in the same category as the 2014 outbreak of Ebola. Since October 2015, more than 1 million cases of Zika and over 4,700 cases of microcephaly have been reported in Brazil. Before this outbreak, Brazil reported about 163 cases of microcephaly each year.

WHO says that up to 4 million people in the Americas may soon become infected with the Zika virus.

The first outbreak of the virus was reported in northeast Brazil in early 2015. By September, the number of children born with microcephaly had sharply increased, so a Brazil Ministry of Health task force was set up to study 35 of those infants.

Infants are considered microcephalic if their head circumference is less than two standard deviations (SD) from the norm. The condition can have many causes, including exposure to drugs, environmental toxins or viral infections during the first 12 weeks of fetal development. The Brazilian task force found that the group it was studying had heads three SDs less than the norm. Neuroimaging showed that out of 27 infants tested, all had neurological abnormalities.

A Microcephaly Epidemic Research Group was quickly assembled to study 1,000 pregnant women with Zika symptoms and no history of alcoholism, family health issues or other factors thought to contribute to microcephaly. (New York Times, Feb. 6)

The virus is mainly spread through mosquito bites, but new evidence shows Zika may also be spread through sexual activity. Dallas health officials reported in early February that a woman in Texas had contracted Zika from an infected partner recently returned from Venezuela. New, unsubstantiated fears have arisen about contracting Zika through kissing.

The countries most hard-hit by Zika, besides Brazil, are in Central and South America and the Caribbean and have high rates of unemployment and poverty. Women in these countries are being asked to put off getting pregnant for six to eight months. El Salvador has advised women to wait two years before having children.

But poor women have little choice over their pregnancies, since abortion and contraception are expensive and not widely available. Abortions are illegal in most largely Catholic Latin American countries. In Brazil, it is legal only if the life of the woman is in danger or if the pregnancy is the result of a rape.

The International Planned Parenthood Federation says that contraception and abortion must be included in the fight against the Zika virus. But the Vatican will not comment on whether it will alter its position on contraception or abortion in the light of Brazil’s dramatic rise in microcephaly.

The Zika outbreak is a tragic example of what effects global climate change can have. Mosquitoes carrying the virus are prolific breeders in warm fresh water. Warming temperatures have triggered above-average rainfall, an exceptionally strong El Niño and the most severe flooding in South America in 50 years. In Brazil and Paraguay, floods in December caused 150,000 people to evacuate their homes.

Women living in poor Latin American countries who are being asked to stop having children will suffer the most from the Zika outbreak. But it is polluting corporations in imperialist countries like the U.S. that are the most responsible for the crisis of global warming.

As Betsey Piette wrote in Workers World over two years ago: “Half of these [carbon dioxide] emissions were produced over the last 25 years, after it was generally accepted by scientists that climate change resulted from burning coal and oil. … It was found that roughly 30 percent of greenhouse gas emissions were produced by just 20 of these companies.” (Dec. 12, 2013)

At every international conference on climate change, the U.S. government has refused to commit to any curb on this country’s high output of carbon dioxide emissions.

The female aegypti mosquito is an aggressive biter that feeds during the day, so mosquito bed netting doesn’t help prevent the infection. WHO says the best form of protection against Zika is to prevent mosquito bites: stay inside with air conditioning and screens on the windows, use insect repellents and wear thick clothing that covers arms and legs. For people living in poverty in a hot climate, air conditioning and thick clothing are not options.

What Brazil is doing

Brazil is a poor but developing country that during centuries of colonial rule followed by imperialist penetration has been plundered of its raw materials and labor. Its efforts to modernize have left it with a $270 billion national debt and a steady decline in economic growth since 2010.

The government of President Dilma Rousseff is mounting a “mega-operation” to kill as many mosquitoes as possible before hosting the 2016 Olympics in August. Health officials are trying to inform the people about the danger while government troops are being employed to chlorinate and eradicate stagnant water where aegypti mosquitoes breed, as well as spray insecticide in the neighborhoods.

The British company Oxitec, associated with Oxford University, has developed mosquitoes with a genetically modified gene that prevents future larvae from becoming reproducing adults. This gene was inserted into male mosquitos that were then released in the city of Piracicaba, Brazil. Only the males are released, since they don’t bite humans. The company reported an 82-percent decrease in the number of people contracting Zika in that area, compared to a nontreated area 1.5 kilometers away.

Whether this technique can control the outbreak of Zika remains to be seen, however.