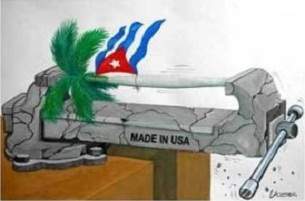 The U.S. Treasury and Commerce departments on Jan. 27 jointly issued revisions that would further ease trade and travel restrictions imposed on Cuba. However, just a week earlier, the Office of Foreign Asset Controls (OFAC) had announced the first fine this year for violation of the U.S. blockade of Cuba.

So, as of Jan. 27, Cuba can officially buy some materials — although not agricultural commodities expressly prohibited by law — from the U.S. on credit. But what bank will risk advancing money if the regulatory arm of the blockade continues to mete out fines for trade with Cuba?

Just since Dec. 17, 2014, when a new U.S. policy toward Cuba was first announced, Washington has fined about six U.S. and foreign entities an accumulated value of $2.8 billion for doing business with Cuba. Going back further, to the beginning of the Obama administration in 2009, there have been 47 fines levied for violations of regulations against Cuba and other countries, with an accumulated value of $14.3 billion. (Prensa Latina, Jan. 29)

The first fine levied this year provides a striking example of the detailed extraterritorial reach of the U.S. economic war against Cuba. It’s a $140,400 fine assessed on $284,515 worth of architectural and design work performed in 2009-2010 for a Qatari company by a British subsidiary of the U.S.-based WATG Holdings Inc. of Irvine, Calif.

For a company that OFAC characterized as “a relatively large and sophisticated multinational architectural design company,” this was a small project involving a Qatari company’s hotel contract, but one “in which Cuba or its nationals had an interest.” In the view of OFAC, ”the apparent violations caused significant harm to the Cuba sanctions program objectives because WATG-UK provided … architecture and design services in support of Cuba’s tourism industry.”

Perhaps more important to OFAC than the fine is the international self-monitoring put into place at WATG, to insure future compliance with U.S. unilateral economic sanctions.

For the first time, though, the new regulations allow approval of exports to Cuban state-owned enterprises, agencies and organizations that provide goods and services to the Cuban people. However, this relaxation of restrictions explicitly excludes tourism — emphasized by the Qatari hotel fine — as well as mining and other extraction considered to be revenue generators.

The U.S. blockade of Cuba, a web of laws and regulations woven over more than 50 years, has failed in its objective of starving the Cuban people into a revolt against the socialist revolution. But every strand that unwinds seems to also encounter another knot. Now there will be U.S. “wink-wink-nod-nod” tourism, along with simultaneous attempts to choke hotel construction.

What Obama can and cannot do

However, Obama can exercise his authority in the following areas: 1) authorize the use of the dollar in international transactions; 2) permit Cuba to import from third countries products with more than 10 percent U.S. components; 3) allow Cuban entities to open correspondent accounts in U.S. banks; 4) end the policy of financial persecution against Cuba; 5) not impede the granting of credits or other financial facilities; 6) allow imports of Cuba’s exportable products or services; 7) authorize Cuban planes and boats to carry passengers, cargo and mail between the two countries; 8) authorize direct exports of U.S. products to Cuba; 9) authorize companies to invest in Cuba (international firms have submitted more than 400 proposals for investment in the Mariel Economic Zone); 10) remove the limit on Cuban products that can be imported by U.S. visitors to Cuba; 11) authorize U.S. citizens to receive medical treatment in Cuba; and 12) allow the distribution of credits, loans and financing for the acquisition of products in the U.S. market. Although it seems the new regulations allow this last point, without authorizing Cuba to use the dollar in international trade, the actual implementation is questionable due to the risk of OFAC fines and record keeping.

With the increased flow of open travel to Cuba advertised and reported in the corporate media, on Facebook and throughout social media, there is an illusion of normalcy. It hides the fact that the U.S. blockade by the economic giant just 90 miles to the north is still in place.

The only place in the world that U.S. residents cannot freely travel to is still Cuba. All travelers departing on charter flights or returning from Cuba through Mexico or Canada are required to state what license category they claim authorizes their travel. Proposed legislation in the House and the Senate — HR 664 and S299 — could finally end these restrictions, but demands must be made for that to happen. Travel challengers with the Venceremos Brigade and Pastors for Peace have fought for these rights over decades.

The Cuban authorities say that to completely normalize relations with the U.S., Washington should lift the economic blockade, return the territory now illegally occupied by the U.S. naval base in Guantánamo Bay, stop illegal radio and TV transmissions to the island, and suspend actions intended to subvert internal order in the Caribbean nation.