Leftist political organizers and spokespeople of the late 1960s under attack from the authorities preferred a special attorney: one who would allow them to bring out their politics in a trial, defend them like a tiger, work pro bono and still find a loophole to win acquittal.

Few lawyers fit that description. But one who did was Michael J. Kennedy of the National Emergency Civil Liberties Committee, who died this Jan. 25 at the age of 78.

Workers World Party’s respect for Kennedy’s contribution grew through his excellent legal and political defense of organizers in the American Servicemen’s Union. The ASU, with WWP’s support, organized enlisted service people in the U.S. Armed Forces during the war against Vietnam, with the goal of breaking the chain of command between the Pentagon generals and the GIs.

Kennedy represented ASU chairperson Pvt. Andy Stapp during Stapp’s field board hearing in January 1968. Through a series of questions, Kennedy let Stapp turn the hearing into a launching pad for the union. Replying to a Kennedy question, Stapp said: “[GIs] want to be able to sit on boards of courts-martial. They want an end to racism in the barracks. They want a federal minimum wage. They want a right to disobey an illegal order. They want a right to elect their officers.” (The Bond, Feb. 18, 1968)

Stapp was thrown out of the Army, but served no time, and the ASU grew to be a powerful anti-war and anti-racist force.

The relationship with Kennedy soon aided the anti-racist struggle within the U.S. military. Some background: Following Dr. Martin Luther King Jr.’s assassination on April 4, 1968, Black people erupted in a righteous revolt in about 100 U.S. cities. Some 22,000 federal troops and 34,000 National Guard were deployed throughout the country, most heavily in Chicago, Washington and Baltimore, where they joined police actions to repress the revolts. It was a bigger version of what happened in Ferguson, Mo., in the summer of 2014. 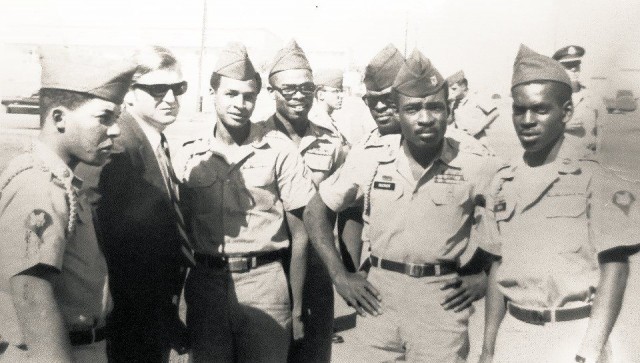 Some 5,000 GIs from Fort Hood, Texas, were sent to Chicago in April 1968 with orders to shoot to kill any arsonist and shoot to maim or cripple anyone looting.

In August of that year, in preparation for antiwar protests at the Democratic National Convention to be held in Chicago, thousands of troops at Fort Hood again received orders to deploy there to patrol Black neighborhoods. But the African-American troops at Fort Hood wanted nothing to do with shooting people they considered their sisters and brothers. On the evening of Aug. 23, some 160 Black GIs came together at Fort Hood to discuss how to refuse riot duty in Chicago.

At dawn the next morning, military police arrested 43 of the Black troops, attacking and beating some of them. Alerted by sympathetic GIs at Fort Hood, the ASU organized publicity and legal defense for the Fort Hood 43. The best lawyers, including Kennedy, were with the NECLC, which took the case.

In 1968, at the height of the Vietnam War, GIs sometimes received four years in jail just for handing out leaflets. Yet at Fort Hood, the military officers feared provoking more struggle. So thirteen of the 43 were fully acquitted. And of the 12 convicted by special courts-martial, not all received the full six months maximum.

Kennedy defended the six “ringleaders,” who faced general courts-martial in October and possible five-year sentences. The GIs were able to take the stand. Pfc. Guy Smith told the court: “I demonstrated against Army policy here and in Vietnam. … There is racism and prejudice here.” In his summation, Kennedy also challenged the officers, saying: “The Army’s racist policies are on trial. Indicate that you will work to end racism in the Army.” (Workers World, Nov. 10, 1968)

The officers didn’t end racism. But they flinched: Two GIs got three months, two got bad conduct discharges, and two were fully acquitted. They all considered it a victory for the Black GIs, the ASU — and Kennedy.

Catalinotto and Stapp visited Fort Hood in 1968 to organize support for the Fort Hood 43.