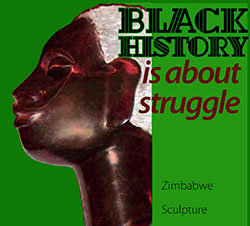 February is designated as Black History Month. It is a reminder that Black lives do matter, have always mattered and will continue to matter.  It places focus on all persons of African descent throughout the African Diaspora, celebrating their survival, against all odds, of brutalities and inhumane acts experienced by them, and also those who have been targets of racial hatred and violence for centuries, and have endured the permanence of racism.

The truth is that without Black history there would be no world history.  Black history is not only a history of resistance and struggle.  It is also a history that reveals that European culture and capitalism were shaped by it from their very inception.  Consider the African culture’s influence in math, science, art and astronomy.

Black history exposes a truth about humanity’s journey to the present.  There is an inescapable link between the history and struggles of African peoples, enslaved and free, and the evolution of both U.S. and world histories and civilizations.  Black people are in and of Africa, the Americas and the Caribbean.  Blacks have experienced the horrors of chattel slavery and now wage slavery, producing profits with their bodies, brains and their wombs, which shaped nations and economies worldwide. The destruction of capitalism is crucial to the destruction of racism.

History books in a white supremacist culture erase and distort Black history.  African-American historian, educator and author Dr. Carter G. Woodson (1875-1950), the initiator of Black History Week in the early part of the 20th century, used the week as a political and psychological weapon to counter the blatant racism that Black people encountered in their daily lives. The week has been expanded to a month. Woodson is referred to as “the father of Black History Month.”

Today’s nationwide Black History Month has the same purpose as Woodson’s because blatant racism still prevails. In 1933, Woodson wrote the best-seller book, “The Mis-education of the Negro,” in which he addresses Western philosophical and ethical indoctrinations within their educational systems, from kindergarten to the university, particularly as they relate to misconceptions, brainwashing and justification of oppression of the “Negro” race.

African-American historian and scholar Dr. Henrik Clarke (1915-1998) is quoted as saying:  “History is a clock that people use to tell their political and cultural time of day.  A compass they use to find themselves on the human map of geography.  It tells a people where they have been and what they’ve been.  But more importantly, what they must be, where they still must go and what they still must become.  It is essential: a road map for living.  If they don’t know their history, they can’t chart their future.” (hunter.cuny.nyu)

Knowledge and understanding of Black history rejuvenates those who are weary of the struggle to be free, and rejuvenates organizing and institution building.  It celebrates and honors the ancestors’ unrelenting quest for liberation and self-determination.

Despite it all, African descendants say: “Still we rise!  We shall overcome! We’re still here!  Lest we forget!”