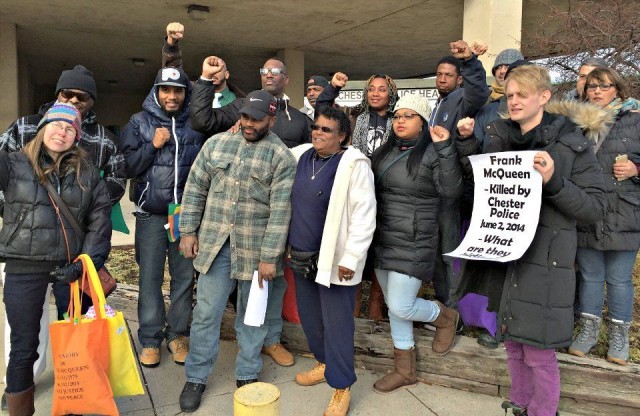 Five people were arrested on Jan. 29 after 25 protesters occupied the Chester, Pa., City Hall to demand answers about the 2014 police killing of Frank McQueen. The protest was organized by McQueen’s mother, Delphine Matthews, and his sister, Phillisa Matthews. It had support from Black Lives Matter Philly, the Philly Coalition for REAL Justice and other progressive organizations.

Since June 2, 2014, when police riddled the body of 34-year-old McQueen “execution style” with over 28 bullets, every attempt by his family to retrieve information has been blocked by the city of Chester. Demonstrators hoped to meet with Chester’s newly elected mayor, Thaddeus Kirkland, to request release of information regarding McQueen’s death.

On arriving at City Hall, protesters agreed their action would be a nonconfrontational demonstration where they would simply exercise their right to freedom of assembly. On entering the building, most demonstrators quickly sat on benches in the lobby, holding signs that read “Justice for Frank McQueen” and “Release the information.”

A smaller group approached the receptionist to request a meeting with the mayor. Within minutes, a staff person from the mayor’s office escorted Delphine Matthews, other family members, two private investigators, radio host Andre Roxx, who had aided in getting Frank McQueen’s story on the air, and Asa Khalif from Philly REAL Justice upstairs to meet with the mayor.

The building typically has just one police officer on hand for security measures. However, after Matthews and her supporters were escorted upstairs by Chester city officials, additional law enforcement began entering the building.  Around 10 minutes later, other police officers, including both uniformed and plainclothes cops, arrived.

For over an hour, the cops never spoke with demonstrators. They allocated a space for media to interview one of the investigators working with the Matthews family.  None ever stated that the protesters’ assembly was unlawful.  At no time did the demonstrators block entrances to the building or interfere in any way with official business.

Meanwhile, during the meeting in Mayor Kirkland’s office, a heated exchange ensued between the mayor and Asa Khalif. Kirkland had to be restrained by his staff members and Khalif was told to leave the meeting, which he did.

When Khalif rejoined the other demonstrators in the lobby, he began to fill them in on the meeting upstairs.  At this point, police detectives ordered everyone to vacate the building, saying they were trespassing on city property and would be arrested.

With little to no understanding of the exchange that had occurred upstairs, demonstrators began to ask why, after over an hour of peaceful assembly, was it now unlawful, and what was the state of the others still in the meeting with Kirkland.  With a unified understanding of police brutality and to ensure no one was left behind in the hands of oppressive police, some in the lobby refused to leave without Mrs. Matthews and the others still meeting with the mayor.

Rather than answering their concerns, police arrested five demonstrators, who were released a short time later with citation offenses. It was later learned that Mayor Kirkland agreed to have the information requested by McQueen’s family released in a week.

As protesters gathered outside the city jail following the release of the five, several Chester residents expressed their support on learning what the action was about.  Their solidarity was not surprising, given the demographics in Chester, where more than half of the 34,000 residents are African-American, most living in extreme poverty.

Chester, dotted with vacant lots and abandoned houses, resembles a mini-Detroit. Until very recently, Chester was a food desert with no supermarkets. The heavily indebted school system is being privatized. City government, dominated by four council members, seems completely detached from the people living in the impoverished communities surrounding City Hall. Kirkland, now mayor, still retains his position of 23 years as a representative in Pennsylvania’s General Assembly.

The authors of this article were among the five arrested.