Atlanta, Jan. 21 — After a four-day, round-the-clock vigil was held in front of the DeKalb County Courthouse — despite frigid temperatures and driving rain — more than 100 protesters cheered the news that a criminal grand jury had brought a six-count indictment against police officer Robert Olsen in the March 9, 2015, shooting of Anthony Hill. The charges include felony murder, aggravated assault, violating oath of office and making false statements. 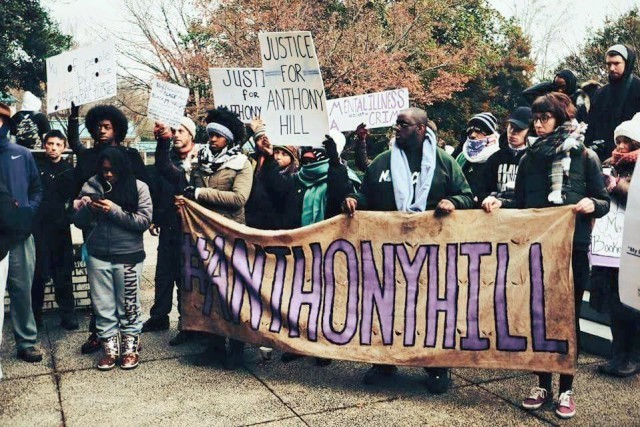 The encampment was initiated by Rise Up Georgia, a social and economic justice group, and was composed of a dozen or more tents set up on the front lawn of the DeKalb County Courthouse in the center of Decatur. It brought out youth, veterans, clergy, union workers and college students from across Atlanta. The four-day action, which garnered daily media coverage, was a constant reminder of the widespread outrage at the undisguised impunity given to police who kill.

Hill, a 27-year-old African American, was shot twice in the chest as he walked erratically and naked around his Chamblee, Ga., apartment complex. Several neighbors called 911, seeking help for the Afghanistan war veteran, whom they knew as a gentle, friendly man. No one alleged that he had hurt anyone or was acting in a threatening manner.

Witnesses say that when DeKalb County Officer Olsen pulled up in his squad car, Hill was in a prayerful position on the ground, and then he began approaching the uniformed officer with his hands up and outstretched. Olsen drew his gun and ordered Hill to stop. The officer claimed that Hill “charged” him — and that, in fear of his life, he fired twice, striking the clearly unarmed man.

Hill had been released from the Air Force after being given a bipolar disorder diagnosis and was suffering from post-traumatic stress disorder. He had sought help from the Veterans Administration, without much success. Yet, despite all the obstacles he faced, he remained optimistic about the future and was passionate about his music. He was especially well-liked by the children in his complex, always willing to play at sports with them.

The young man and his partner had planned to celebrate their third anniversary the night he was killed. Hill reportedly had stopped taking his prescription medication, as it brought about sleeplessness and caused his jaw to lock and his tongue to swell.

Just months earlier, Kevin Davis, a popular restaurant worker, called 911, requesting help for his partner, who had been stabbed by a roommate. Upon arriving at the apartment, DeKalb County Officer Joseph Pitts shot and killed Davis’ beloved, three-legged dog. Davis thought that his partner’s assailant had returned and grabbed his unloaded pistol, holding it at his side.

When Davis saw his dead dog, he yelled at Pitts several times, “Why did you shoot my dog?” Pitts then shot Davis multiple times. He died two days later in the hospital in ankle restraints, having been denied family visits and even charged with aggravated assault on a police officer.

Numerous militant demonstrations were organized, demanding justice for Anthony Hill, Kevin Davis and others killed by Atlanta area police. Thousands of Atlantans, particularly African-American youth, had already become engaged in the struggle against racist police and vigilante killings after the deaths of Trayvon Martin, Michael Brown and Eric Garner, among others.

Around the country, and particularly in Georgia, it is unlikely that police officers who have shot people are brought before a grand jury, regardless of how suspicious the circumstances might be. Georgia law allows a police officer and his lawyer to sit through the entire proceedings, hearing all the witness testimony. The officer is allowed to make the last presentation, which cannot be challenged or cross-examined.

The Atlanta Journal-Constitution published a study in December which revealed that of the 184 fatal police shootings since 2010, half of the victims were either unarmed or shot in the back. More than one-third were killed in their own homes or that of a loved one, following a call for help. African Americans were more than twice as likely as whites to be killed. A police officer was indicted only once by a grand jury, but in that case, the district attorney persuaded a judge to drop the charges the next day.

Following several police killings of African-American men in 2015, DeKalb County District Attorney Robert James brought the cases before civil grand juries for review in October. Neither Davis’ nor Hill’s killers were indicted, but the jurors requested that James further investigate Hill’s shooting. This led to the criminal grand jury hearing eight hours of testimony about Olsen’s shooting of Davis, and then indicting him.

Hill’s family, his partner Bridget Anderson and the many activists who are fighting for justice for Hill want the public to know him — not as he has been portrayed in the media or by police, but as the genuinely thoughtful, talented and kind young man he was. He had shared his thoughts on Facebook and Twitter about living his life, despite having a mental illness, and encouraged other people deemed not “normal” to “Love your Life.”