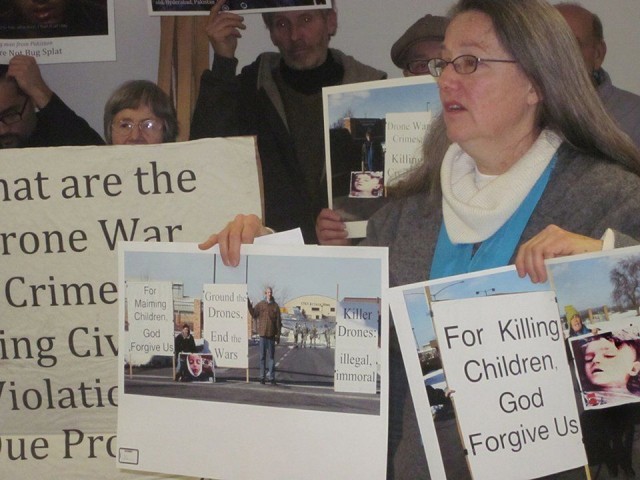 Syracuse, N.Y. — Mary Ann Grady Flores, a Catholic Worker movement, anti-drone activist, was taken into custody in the DeWitt, N.Y., Town Court on Jan. 20 to serve a six-month jail sentence for her 2013 nonviolent protest at nearby Hancock Air Force Base in Syracuse.

Grady Flores was part of a five-year stretch of activists’ unrelenting Central and Upstate New York opposition to U.S. drone warfare, anchored by the Upstate Coalition to Ground the Drones and End the Wars. (upstatedroneaction.org)

Grady Flores’ only crime was to briefly step on base property while taking photographs of an anti-drone demonstration. She was subsequently arrested and charged with violating an “order of protection” filed by the Hancock base commander against drone protesters — none of whom he had met. At Grady Flores’ initial trial, he admitted: “No, I don’t know Mary Anne Grady. No, I’ve never had a conversation with her. I’m not afraid of her. That’s just a piece of paper. I want — I just want these protesters away from my base.” (Democracy Now! Jan. 19)

A court typically issues an “order of protection” to prevent abusers from getting close to and/or killing victims of domestic violence — most usually women being beaten by male partners. Yet, no Hancock soldiers, officers or property had been hurt or damaged by anti-drone protesters during the five-year anti-drone campaign. The U.S. repressive state and its military are cynically using a law meant to protect women to shut down protest against drone attacks.

An unnamed whistleblower leaked classified Department of Defense documents that reveal that nearly 90 percent of people killed by drones in one five-month period were noncombatants who were close to intended “targets.” (The Intercept, Oct. 15) U.S. drone warfare in Afghanistan, in 2015 alone, killed between 795 to 1,217 people, according to the Bureau of Investigative Journalism, and already another 144-147 people killed in 2016. (tinyurl.com/hbr2eug)

Before she was jailed, Grady Flores zeroed in on another underlying reason for the state’s targeting anti-drone activists: “Drones are just one part of the endless wars and U.S. profiteering off of war-making.” (Huffington Post, Jan. 19)

The Albany-to-Syracuse corridor is becoming a “Silicon Valley” of drone military-industrial development. In December, the Central New York region, centered in Syracuse, won Gov. Andrew Cuomo’s “Hunger Games” competition for a half-billion dollars in grants for “upstate revitalization.” The region pledged half the money, $250 million, to “a center for research and development of unmanned aerial and ground vehicles.” (Syracuse Post Standard, Dec. 10)

A key player in the plan is NUAIR, a consortium of Central New York state businesses and universities specializing in drone technology and testing. The Federal Aviation Administration designated nearby Griffiss Air Base as one of six U.S. sites for drone tests. NASA has committed to building a drone test facility. (Atlantic Monthly, Nov. 13)

Though publicity touts the drone boom as benefiting “private” or “civilian” uses, the primary backers of NUAIR have been military-industrial corporations like SRC, Saab Sensis and Lockheed Martin, as well as energy giant National Grid. Saab Sensis develops military radar and air-traffic systems out of East Syracuse. Lockheed Martin — the largest for-profit employer in Syracuse’s home county of Onondaga — creates warfare electronics in suburban Salina. SRC Inc., which started up at Syracuse University, designs drone radar for military use.

The Department of Defense will be the major user of new drone technologies underway at NUAIR. The DOD has spent $200 million in the last 13 years on the “sense and avoid” drone technology that the Syracuse firms specialize in. (Syracuse.com, Jan. 5, 2014)

Drone boosters say that the drone boom will bring jobs. Syracuse has the highest rate of “concentrated” extreme poverty for Blacks and Latinos/as among the hundred largest U.S. metropolitan areas. (Paul Jagowsky, “Architecture of Segregation”)

Anti-drone activists disagree with the “more jobs” assertion. Dave Kashmer, a U.S. Navy veteran, says: “It’s not going to produce jobs for a Syracusan. It’s all high-tech engineer jobs, and for that you need a high-tech education.” Only a quarter of the residents of Syracuse have a bachelor’s degree, even though Syracuse University is there. ((Atlantic Monthly, Nov. 13)

When the local Post Standard ran a page one headline: “Reaper Drone Makes History in Syracuse” in December 2015, the story emphasized that this was “the first unmanned aircraft in the [U.S.] to launch from a commercial airport.”

But the Reaper MQ “Hellfire” drone is used only as a battlefield remote-controlled bomber by the U.S. military — and for surveillance against immigrants at the U.S. borders. This is a far cry from corporate ads of a cute commercial drone delivering holiday packages from Amazon.

Kinane emphasizes that hyped commercial uses of drones are a diversion from military uses. Meanwhile, the domestic drone industry provides an industrial base — research, engineering expertise and production — for the Pentagon.