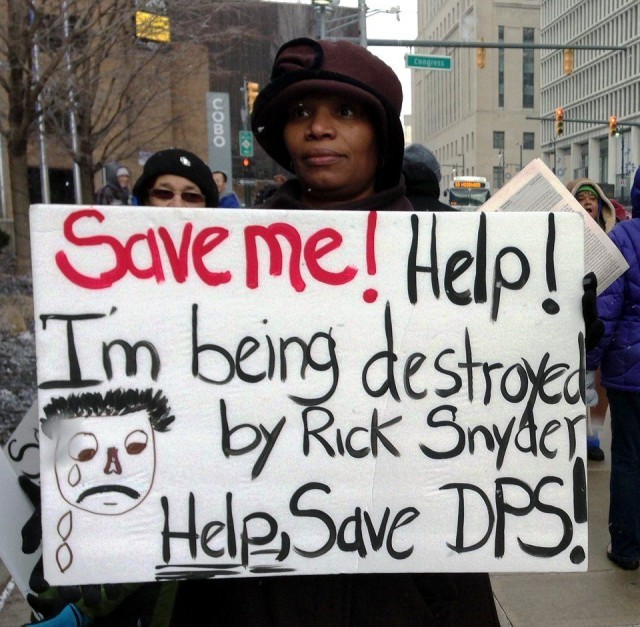 Water You Fighting For? It’s more than a great play on words. It’s a grassroots organization in Flint, Mich., founded by mothers Melissa Mays and Lee Anne Walters, who refused to sit back and watch their children suffer. WYFF has been protesting the toxic Flint water for almost two years.

Mays said in a national interview: “When your 12-year-old wakes up in the middle of the night crying because his bones hurt and there is nothing you can do, no creams, no medicine that you can give him to ease his pain, that’s infuriating. When your youngest can’t go anywhere because his white blood cell count is four, and his immune system is so compromised you’re worried he is going to get sick with anybody breathing on him, that’s awful.

“When your oldest is starting to struggle in school subjects that were very easy to him,” continued Mays, “there’s nothing more than I want to do than scream and yell and that’s what we did for over a year, scream and yell, ‘This isn’t right, stop it, tell us the truth.’” (foxbusiness.com, Jan. 22)

Now, because residents like Mays organized and fought back, the Flint water crisis is a national scandal, even making the front page of the New York Times. Two officials of the Michigan Department of Environmental Quality and the regional head of the Environmental Protection Agency have resigned in disgrace.

The DEQ failed to instruct the Flint water department to add anti-corrosive chemicals to the water when Flint stopped using water from the Detroit Water and Sewerage Department and began tapping into the polluted Flint River. The DEQ’s bad instructions allowed Flint system pipes to leach deadly lead into the water, leaving the whole city of 100,000, including 9,000 children under age 6, poisoned.

The primary target of community anger is Gov. Rick Snyder, a reactionary Republican who has been deflecting blame while scraping up a woefully inadequate $108 million in state and federal funds for Flint.

Political pressure forced Snyder — who by state law has immunity from the Freedom of Information Act — to release emails between him and other state officials about Flint’s water. Now it should be impossible for Snyder to escape criminal responsibility. Despite saying “I’m sorry” to Flint residents over two dozen times in his State of the State speech on Jan. 19 in the State House in Lansing, his disdainful indifference and lack of remorse were evident.

“Arrest Snyder” has become a rallying cry. Signs against him were popular at Detroit’s annual Martin Luther King march on Jan. 18, which included a Flint delegation led by Mays. Later that day people picketed Snyder’s newly purchased swank condominium in downtown Ann Arbor. The following day, 500 people demonstrated in bitter cold outside Snyder’s annual speech, making enough noise to be heard inside the Capitol. Some protesters carried torches and pitchforks.

Activists are also demanding the firing of former Flint Emergency Manager Darnell Earley, who now oversees the Detroit Public Schools system and who carried out the decision to draw water from the Flint River. On Jan. 20, the day President Barack Obama visited the North American International Auto Show, another teacher sick-out over cuts, huge class sizes and dangerous building conditions closed most Detroit public schools. Some 500 DPS teachers, along with Flint residents, picketed the auto show. The main demand was that these two criminals, Earley and Snyder, be punished.

The movement is fighting for more than the ousting of a few perpetrators, however, and calls for an end to Emergency Management. Public Act 436 allows the governor to appoint an Emergency Manager as dictator over a city or school district deemed to be in financial distress — rendering elected local and school officials powerless. PA 436 makes paying the banks the first budgetary priority.

Flint Democracy Defense League, formed to oppose Emergency Management, is now deep in the fight for water justice. League representative Nayyirah Shariff has called for Snyder’s arrest, saying that “he can take his apology and flush it down the toilet.” (Democracy Now!, Jan. 8) The FDDL and WYFF have formed the Coalition for Clean Water.

Water justice groups in Detroit and Flint have been supporting each other, reminding the public that tens of thousands of households in Detroit remain without water after a brutal shutoff policy was instituted in 2014 under Emergency Manager Kevyn Orr. A People’s Tribunal Jan. 23 drew 200 people and found Snyder and Detroit Mayor Mike Duggan guilty of depriving people of water.

Thanks to heroes like Mays and Shariff, Flint has gained the world’s solidarity. Donations of money, water and supplies have come from celebrities like Cher, Michael Moore, Meek Mill, Big Sean and Pearl Jam; Muslim communities in Detroit suburbs of Troy and Dearborn; the Little River Band tribe; Teamsters in Minneapolis; and of course United Auto Workers locals around the country. It was in Flint in 1937 that the heroic 44-day sit-down strike won the first UAW contract with General Motors.

People all over the U.S. have joined the people of Flint in saying, “Water is a human right — fight, fight, fight!”