The winter storm, driven by extra energy typical of this climate-change era, dropped 1 to 3 feet of snow from Tennessee to Connecticut between Jan. 22 and 24 as it jammed interstate highways, flooded Atlantic beach towns and closed cities along the Eastern Seaboard. 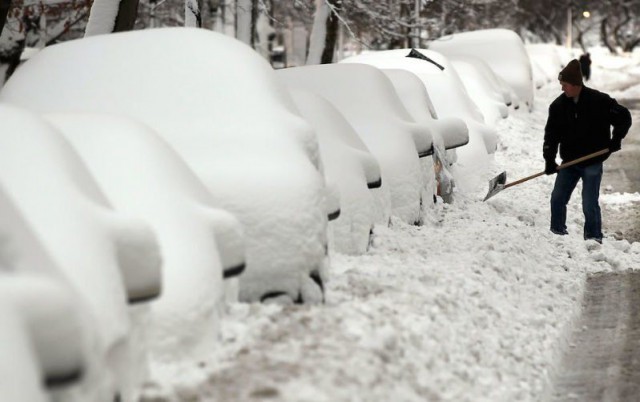 Storm Jonas was no equal-opportunity disaster. The snow landed everywhere, but like 2005 Hurricane Katrina, the impact of this storm hit hardest the workers, the poor and the most oppressed communities. An example of disaster inequality? Look at the mostly African-American and very poor city of Baltimore, the home of the unpunished cop killing of Freddie Gray and last spring’s rebellion.

One of the organizations that has been demonstrating regularly against police “impunity,” the People’s Power Assembly, knew that the storm would wreak havoc on the residents of Freddie Gray’s neighborhood. When the snow stopped at 30 inches on Jan. 24, the Baltimore People’s Power Assembly and the Southern Christian Leadership Conference organized People’s Emergency Snow Brigades.

The organizers called people to check on the health and safety of public housing residents. Young people went out to clear snow where residents needed help digging out. The PPA and volunteers from the Maryland Art Institute and Johns Hopkins University discovered conditions building toward a frozen version of Hurricane Katrina.

They found that residents both on the east side and in the community on the west side where police killed Freddy Gray had no food at home and no way to get out to get it. Many of the children depended on food served in school — and schools were closed on Monday, Jan. 25. Residents who reached the corner store found its shelves already empty. Even the Food Bank was closed.

The state and city had enough funds in their budgets to put National Guard humvees and cops on the streets. But the “authorities” were doing exactly what they are meant to do in capitalist USA: protect the property of those who own — that is, the capitalists. There were no deliveries of emergency food, nor were urgent cases transported to hospitals.

After late night listening to and helping the residents of Gilmor Homes, the PPA and SCLC reacted Jan. 25 by calling a press conference at the Harriet Tubman Solidarity Center to issue four immediate demands:

“We are calling on the mayor and the governor to provide emergency food relief immediately.

“We are demanding that the government reorder priorities and organize door-to-door checks to make sure our elderly, those with health problems and young children are OK.

“We demand that the mayor enact an emergency jobs program to hire unemployed youth and members of our community to help with clean up in the community itself, not just downtown.

“We need a People’s Emergency Plan: Where do people go for food?  What do workers do about lost wages?

“Our members can speak directly to what is happening in the neighborhoods as we were in Gilmor Homes until late last night and have taken calls all day and night from desperate housing project residents.”

An hour before the PPA/SCLC demand for food distribution, Baltimore’s Mayor Stephanie Rawlings-Blake announced at a briefing that although the city schools would remain closed on Jan. 26, recreation centers would distribute meals to youngsters. She touted a mayoral program that hired young workers to clear public sidewalks for seniors and people with disabilities who were unable to do so themselves and said the Baltimore city website had emergency numbers and instructions on how to get help.

What the mayor did not announce was a plan to ensure that everyone who needed help received it. Both the New York Times and Baltimore Sun reported that top city officials could not say when the snow would be cleared.

Sharon Black, of the PPA, told Workers World, “The storm exposed the failure of capitalist society to look after the needs of the people. The power of the state was used not to protect and serve the people, but to protect the property of the capitalists.”