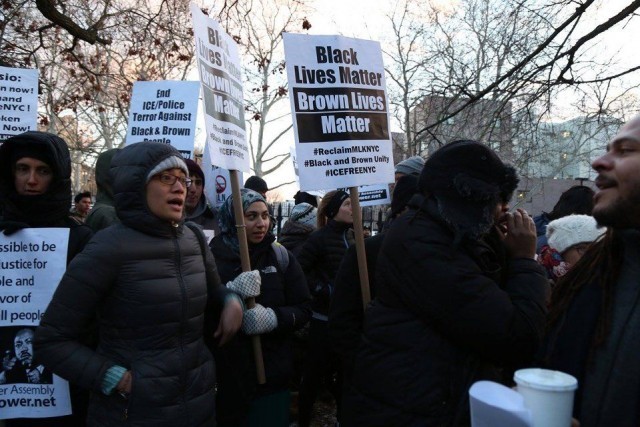 The bold, dynamic street actions which have characterized the Black Lives Matter movement are being adopted in the struggle against mass deportations of refugees — most notably in the Jan. 8 shutdown of Manhattan traffic, a fierce, militant action carried out by ICE-Free NYC.

De Blasio was attempting to do what so many capitalist politicians do on MLK Day: use the revered mantle of King to establish a phony connection with the very communities they are oppressing.

De Blasio chose St. Mary’s Episcopal Church in Brooklyn for this desecration. But New York activists weren’t having it. As de Blasio began reading King’s words, KaLisa Moore of the People’s Power Assembly stood up and said, “No! Do not use the words of Dr. Martin Luther King!”

As two pew rows of Black, Brown and white activists stood up, Moore then mic-checked over de Blasio, saying, “In the spirit of Dr. Martin Luther King Jr., we, the Black-Brown community, stand together to reclaim Black and Brown power! We will continue to fight our oppressors!”

Moore continued, “The Immigration and Customs Enforcement Agency and the New York Police Department continue to terrorize our communities,” and here she pointed a finger at de Blasio as she said, “at the hands of you!”

Outside, a militant crowd of 250 rallied with placards that read, “End ICE/Police Terror Against Black and Brown People,” “There Are No Borders in the Workers’ Struggle,” “No Human Being is Illegal” and “Stop Police Terror” — among other placards bearing the names of people whose lives were cut short by racist police killings. Despite the evening’s frigid temperatures, the activists then marched through Brooklyn, accompanied by the people’s band, The Rude Mechanical Orchestra.