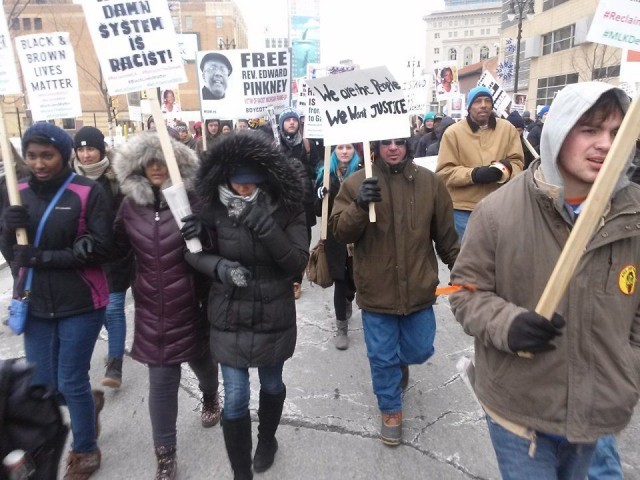 Despite a windchill factor below zero, Central United Methodist Church was filled with social justice and peace activists who work tirelessly throughout Michigan. Dr. Martin Luther King Jr. spoke in this church numerous times in the 1950s and 1960s.

The special guest for the 2016 gathering was Pastor Cori Bush of Ferguson, Mo., who traveled to Detroit and Toledo, Ohio, to bring news about the ongoing movement against racist violence and state repression in St. Louis County. Bush is a health care professional and clergywoman who experienced firsthand the police violence against the people of Ferguson in the aftermath of the cop killing of Michael Brown on Aug. 9, 2014.

Mrs. Dorothy Pinkney was a scheduled speaker, but was unable to drive some 200 miles from Berrien County due to inclement weather. However, a statement from her was read by Marcina Cole, a leading organizer in the Detroit area campaign to win freedom for the Rev. Edward Pinkney, Michigan’s political prisoner.

Rev. Pinkney was railroaded in the racist Berrien County courts during 2014 on fraudulent felony charges of changing five dates on recall petitions aimed at the removal of Benton Harbor Mayor James Hightower. During the course of the trial there were no eyewitnesses presented by the court who could testify that Pinkney had committed the alleged crimes.

The political activities of Pinkney and his associates were introduced as evidence by the prosecuting attorney. Pinkney is the leader of the Benton Harbor Black Autonomy Network Community Organization (BANCO), whose political work was utilized by the prosecution to convict him of these spurious charges.

At present, Pinkney is serving a sentence of 30 to 120 months in Marquette prison in the far northern area of the state. He is appealing the conviction in the state courts.

The Homrich 9, who were arrested in July 2014 for blocking Homrich company trucks that were heading out to shut off Detroit residents’ water services, were co-recipients of the People’s Spirit of Detroit award.

Solidarity with broad array of struggles

The Detroit MLK event is the largest annual gathering of progressive forces in southeastern Michigan and is endorsed by a host of organizations and coalitions dealing with education, water rights, housing, police misconduct and other issues.

Speakers and artists participating in the rally and march included people’s lawyers Vanessa Fluker and Alice Jennings, addressing housing and water rights, respectively; Elena Herrada, an elected member of the Detroit Board of Education in exile, which is still under emergency management appointed by Gov. Rick Snyder; U.S. Rep. John Conyers Jr., who drafted and pushed through the federal bill recognizing the King holiday, which went into effect in 1986; and Tony and Mary, two of the now adult children of Detroit-based Civil Rights martyr Viola Liuzzo.

Among those addressing the assembly, Joe Mchahwar of Fight Imperialism, Stand Together (FIST) spoke on the plight of the Syrian people and the role of the U.S. and Israel in the continuing oppression of the peoples of the Middle East. Melissa Mays of Flint, Mich., whose pioneering work exposed the crimes committed by Gov. Snyder in poisoning the children and adults of that formerly industrial city, also spoke. And Amer Zahr, a Palestinian-American writer and adjunct professor at the University of Detroit Mercy Law School, explained the central role of Palestinian oppression in the political developments in the Middle East.

Music was provided by Bobbi Thompson of Central United Methodist Church, the director of the Deep River Choir. Songs that addressed the right to clean, safe water were performed by the Flowtown Revue.

After a more than two-hour rally, a march was held through downtown Detroit. It wound past the 36th District Court to demonstrate against foreclosures and evictions; then to the Wayne County Jail to protest the mass incarceration of African Americans and other oppressed peoples; on to the Detroit Water and Sewerage Department in opposition to water shutoffs and proclaiming that water is a human right; and finally through the financial district with the message, “Bailout the people and not the banks!”

Marchers returned to the church for a community meal supplied by the Detroit Wobbly Kitchen. Hundreds were served. A cultural program, coordinated by award-winning poet Aurora Harris, an author and lecturer at the University of Michigan at Dearborn, followed.

Tracy Mathews, a longtime Detroit community activist who has been a logistical volunteer at the Detroit MLK Day for the last six years, said this year’s event was the best so far. Mathews commented, “My interaction with Pastor Cori Bush provided insight into the struggle in Ferguson and was inspirational.”

This annual commemoration, which seeks to evoke the social justice and anti-war legacy of Dr. King, was founded in 2004 by the Michigan Emergency Committee Against War & Injustice (MECAWI) during the early months of the U.S. invasion and occupation of Iraq. Since then, a Detroit MLK Planning Committee has been organized, bringing in veteran Civil Rights activists, along with youth and workers who help organize the event. More than two dozen progressive organizations and individuals are co-sponsors and endorsers.