Through December and January imperialist spokespeople blamed the Syrian government for a humanitarian crisis in the city of Madaya, about 25 miles northwest of the capital of Damascus. The U.S. corporate media spread stories of mass starvation, using false and fabricated photography and “testimony” by opponents of the Bashar al-Assad government.

Madaya is a small mountainous town in northwestern Syria. In 2015 United Nations agencies incorrectly estimated the population to be 40,000 to 42,000; however, Syria’s Census Bureau estimated 9,330. 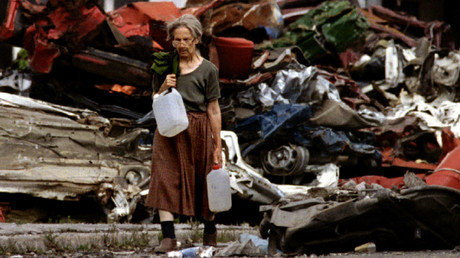 “The Syrian government has already requested, through the Ministry of Foreign Affairs, to the office of the resident coordinator of the United Nations in Syria, by its note #3746, dated December 27, 2015, to URGENTLY deliver humanitarian assistance, including medical assistance and fuel, to al Foua and Kafraya, in the governorate of Idiib, and to Madaya, in the governorate of the Damascus countryside.

“We would like to highlight that the humanitarian assistance sent to Madaya in mid-October was sufficient for two months. And this testimony was corroborated by the representative of the [International Committee of the Red Cross] in Syria a few days ago. The Syrian government approved the requests” as far back as October. “Some of the humanitarian assistance sent to restive areas had been looted by the armed terrorist groups on several occasions. [Emphasis, C.L.] And this is exactly what happened in Madaya and al- Zabadani.”

“Furthermore, the Turkish government hindered the delivery of humanitarian assistance through the borders of other restive areas. … The representative of the ICRC corroborated … that there is no starvation problem in Madaya.” The U.N. also admitted on Dec. 27 it was unable to send aid again to Madaya and to Kafraya and al-Foua.

The ambassador focused on the real problem: “The terrorists are stealing the humanitarian assistance from the Syrian Red Crescent, as well as from the United Nations, and they are keeping this assistance in warehouses, and then they use it as a leverage of political and financial gain for them to survive.”

Despite hostile media interruptions, Dr. Ja’afari ended with an insightful political statement: “Whenever there is a step forward towards a political solution in Syria, certain incidents are fabricated to de-fame the Syrian government and to negatively impact the political process, … certain regional and international parties supporting terrorism in Syria are not satisfied that the Syrian government is engaging positively in the political process, and thus are trying to demonize it … torpedoing the meeting in Geneva.”

The pro-imperialist press is silent on U.S., Britian, France, Turkey, Saudi Arabia and Israel’s ultimate goal of overthrowing the legitimately elected government of Syria. It also fails to bring up the history of imperialist lies, for example, the lie of the Gulf of Tonkin in Vietnam in 1964, which opened the door for the U.S. invasion; the lie of “endangered American Medical students” as a pretext for invading Grenada in 1983; the lie of “ethnic cleansing” in Yugoslavia in 1999; and the lie of “weapons of mass destruction” in order to invade Iraq in 2003. Now in 2016 there is the lie of the “siege” by the Syrian government of Madaya.

The truth is that the United States and its imperialist allies are responsible for killing 250,000 Syrians and displacing 9 million more who are fleeing the Islamic State group and similar organizations.

According to the website “The Wall Will Fall” that monitors honesty and truth in the media, here are some slightly rephrased questions posed by Australian journalist John Pilger that the corporate media never asked:

Why, if the Syrian government is not allowing aid into Madaya, was the U.N. able to enter on Dec. 28 and evacuate 128 wounded terrorists, part of the opposition to al-Assad?”

Why if the U.N. evacuated wounded terrorists, did it not evacuate the “starving children” — or at least mention that conditions were deteriorating?

Why do relief organizations clearly state that there is food available but at exorbitant prices?

The food for Madaya comes from Damascus, which is obviously a government-held area. If the Syrian government is intent on starving its own people, why did it allow food to leave Damascus and be sent to Madaya?

Finally there is the important question of “misrepresented photos” of starving Syrians. Most of the photos have been confirmed as fraudulent and were taken of other situations. For example, there is the fabricated photo of an emaciated starving male in Madaya. (tinyurl.com/j8uzcc2)

Or the photo of a starving young girl in Madaya. The truth? Her name is Mariana Mazeh, and she lives in the city of Tayr Filsey in South Lebanon. She went on YouTube to refute that she lives in Madaya. (tinyurl.com/z9vpwoa)