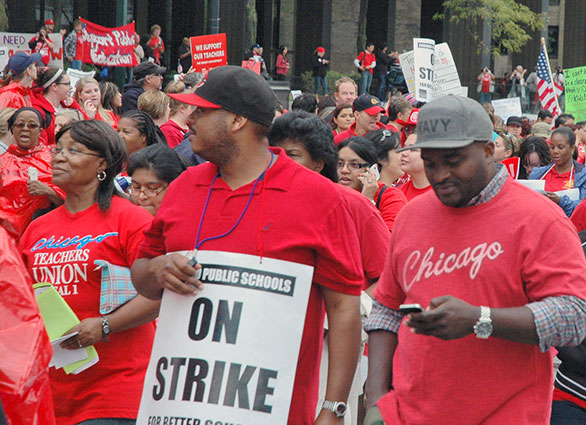 A current Supreme Court case will determine whether or not unions can continue to collect fair share fees — the dues nonmembers pay in exchange for collective bargaining benefits.

The U.S. Supreme Court heard oral arguments regarding Friedrichs v. California Teachers Association on Jan. 11. A ruling is expected no later than June 30, the end of the court’s current term.

The case started when Rebecca Friedrichs, an anti-union kindergarten teacher from Orange County, Calif., and nine other teachers filed a suit against the CTA, an affiliate of the National Education Association, on April 29, 2013. The plaintiffs are represented by the viciously right-wing Center for Individual Rights and the bigoted Christian Educators Association International.

CEAI’s sole purpose is to raid members from the two national teachers’ unions — NEA and the American Federation of Teachers — with the goal of breaking them. Propaganda used by CEAI against NEA and AFT have little to do with the unions’ positions toward public education, but instead attack them for being pro-choice and supportive of lesbian, gay, bisexual, trans* and queer teachers and students. (Trans* is used with an asterisk to indicate the spectrum of all the different genders of people who do not conform to the either/or of male/female or masculine/feminine.)

If the court rules on the side of Friedrichs, it would overturn its 1977 decision in Abood v. Detroit Board of Education, which permits unions in states that allow public sector collective bargaining to receive fees from nonunion members that are equivalent to members’ dues, since all workers in a fair share shop receive contractual benefits through union representation. Union dues are used to generate resources, communication and representative services.

On the date of the hearing, people rallied outside the Supreme Court on both sides of the class picket line. “This is a people’s court,” stated CTA member and supporter Maya Walker. “I worry that with the wrong decision in Friedrichs, I will not be able to advocate for my students.” (neatoday.org, Jan. 12)

National wave to bust our unions

In 2011, Wisconsin Gov. Scott Walker and reactionary legislators started rolling back union rights by passing Act 10, which cut collective bargaining rights for public sector workers, as of June of that year. Walker signed a so-called right-to-work (for-less) bill, which prevents unions from requiring all workers to pay dues, in March 2015.

Since then unions in Wisconsin, particularly in the public sector, have lost more than 50 percent of their membership. As anyone who has ever been in a union knows, a loss of numbers weakens union power. The undermining of public sector unions has been especially damaging to the most oppressed workers: women of color.

Currently, there are 21 fair share fee states and 25 so-called right-to-work states. Since 2011 in Wisconsin, Michigan and Indiana have also adopted right-to-work. Attempts have been made to turn Ohio into a right-to-work state, and they are now being made in West Virginia, where workers of all occupations are already among the lowest paid in the U.S.

In West Virginia, private sector unions such as the Steelworkers and Mine Workers would be the hardest hit, since state and education employees already work under right-to-work conditions. Another bill is being introduced that would repeal payroll deductions; if passed, all members would be dropped from union rolls.

A major lobbyist outfit behind many of the right-to-work laws and all other anti-union legislation is the American Legislative Exchange Council. It was founded in 1973 by pro-segregationist, Illinois state House staffer Mark Rhoads and Paul Weyrich, a co-creator of the far-right Heritage Foundation. Their initial intention was to eliminate environmental protection, workplace safety and minimum wage laws. Rhoads and Werich were proponents of apartheid South Africa and the formerly racist, settler-ruled Rhodesia (now Zimbabwe), prior to the country’s 1980 liberation by the Zimbabwe African National Union. ALEC’s roots are an example of how right-to-work legislation is directly tied to Jim Crow oppression.

As pointed out in a Jan. 21 WW article, “What are needed are People’s Assemblies to organize and educate workers on how to win wage increases and safety measures and to raise their consciousness.” (tinyurl.com/wwWVaWorkers)

The AFL-CIO should mobilize a national march or several marches — along labor-community lines — well before the June 30 deadline. There should also be militant occupations to shut down Washington, D.C., as a way to put pressure on the Supreme Court justices.

Conscious workers need to do all we can to educate and agitate against this union-busting climate. We also need to explain to union members how their struggle is tied to the fight against national oppression and racist police killings and discuss the significance of the Black Lives Matter movement.

We can take inspiration from the victorious Boston school bus drivers of Steelworkers Local 8751, who just won a 26-month battle against the rotten Veolia/Transdev Corp., or from the courageous members of the Detroit Federation of Teachers and their current fight for safe schools.