Multiple protests against death-dealing U.S. drone warfare took place across the U.S on Jan. 12, a National Day of Action to Stop Killer Drones. The actions were scheduled to expose the real “State of the Union” as President Barack Obama hyped U.S. greatness in his annual speech. Secret U.S. military documents leaked by an internal whistleblower reveal that 90 percent of U.S. drone assassinations kill civilians, including children, rather than the alleged targets. (The Intercept, Oct. 15) 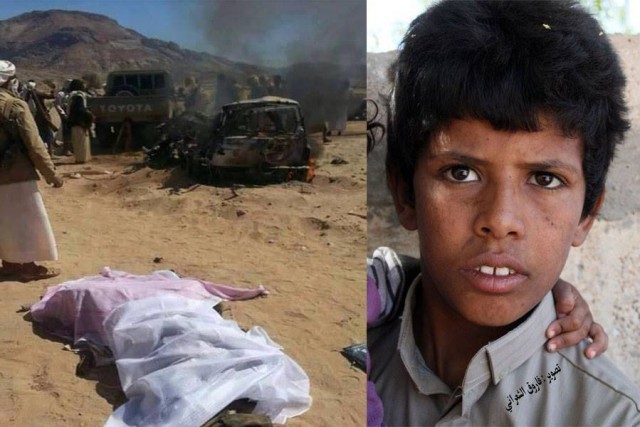 Mohammed Tuaiman, a 13-year-old Yemeni boy killed by a 2015 CIA drone strike, said of the drone “death machines” in a Guardian interview before his death: “A lot of the kids in this area wake up from sleeping because of nightmares from them and some now have mental problems. They turned our area into hell and continuous horror, day and night, we even dream of them in our sleep.” Earlier strikes had killed his father and brother. (Guardian, Feb. 10)

On the Day of Action, resisters were arrested at Creech Air Force Base in Nevada, Beale AFB in California and in Washington, D.C. Later solidarity actions are planned at CIA headquarters in Virginia and at Volk AFB in Wisconsin. The National Campaign for Nonviolent Resistance called the actions. (KnowDrones.com)

At the Washington, D.C., rally, activists condemned the unending U.S. wars, mass incarceration and Islamophobia, as well as killer drone strikes. An alternative State of the Union address was read that included demands to shut down the U.S. prison at Guantánamo in Cuba and demolish all armed drones. Thirteen protesters, representing states across the country, were arrested on the Capitol steps after attempting to deliver to Congress a petition naming U.S. war crimes. (popularresistance.org)

In California, the “Occupy Beale Air Force Base” resisters staged mock drone attacks at the federal courthouse and the city hall in Sacramento, the state capital, to dramatize how automated warfare terrorizes people in other countries on a 24/7 basis. Joining an ongoing homeless advocate rally, they shouted: “Homes, not drones! Food, not bombs!” They attempted to deliver a letter to their “elected representative,” Sen. Barbara Boxer, but were locked out of her office despite a scheduled appointment. Demonstrators commented, “That’s what democracy looks like in America!”

Protesters then went on to Beale AFB, where five activists blocked commuting traffic and were arrested. (Nuke Resister, Jan. 16)