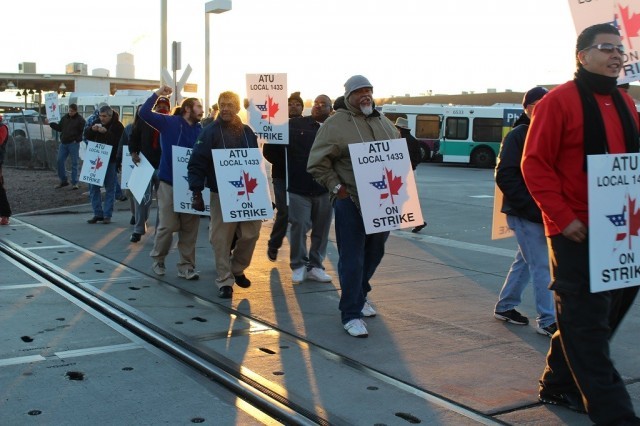 “You always hear about workers versus evil corporations — this is that situation,” said Michael Cornelius, lead negotiator for Amalgamated Transit Union Local 1433 at a press conference about a possible strike of 650 public transit bus drivers in Phoenix. (PhoenixNewTimes.com, Jan. 4) The union struck for seven days after negotiations with contractor Veolia/Transdev collapsed Jan. 8. At issue were wages, bathroom breaks and bereavement time.

In anticipation of the strike, management canceled workers’ health insurance on Jan. 7, despite payments made by workers in advance. “I’m just disgusted. We’re human beings. Even if we have our differences, they have no integrity to do this to us,” said driver Gilbert Balderas, whose cancer treatment medications cost him $17,000 a month without insurance. (Jan. 12)

On Jan. 15, the union reported on its Facebook page that a five-year contract had been ratified by an 85 percent majority vote and drivers would return to work the next day. By dropping 1 percent from the wage increase, Local 1433 was able to end a two-tier structure for vacations and retirement. “Now we can focus on the overall issue of the outsourcing of our public transit system,” said Local 1433.

The Seattle City Council passed an ordinance unanimously on Dec. 14 extending collective bargaining rights to for-hire drivers. Typically classified as “independent contractors,” taxicab operators and drivers for services like Uber and Lyft are not protected by the National Labor Rights Act. As a result, these workers are often forced to work long hours for pay that falls well below the minimum wage. “Since I started driving for Uber, Uber has cut our pay without notice, terminated drivers without giving a reason and blocked our efforts to improve our working conditions,” said driver Peter Kuel. (TheStand.org, Dec. 15) Under the new law, drivers can elect union representation to negotiate for wages, hours and working conditions.

“This bill means a lot to us drivers,” said Fasil Teka. “It can have a positive impact, not just for drivers in Seattle, but for independent contractors across the country.” The drivers worked with Teamsters Local 117, which represents 16,000 workers in Washington state, to form the App-Based Drivers Association and the Western Washington Taxicab Operators Association.

In a Dec. 24 ruling, the National Labor Relations Board struck down a Whole Foods regulation barring workers from taking photographs or recording conversations with management on the job. In the 2-1 decision, the NLRB found that Whole Foods’ policy interfered with the workers’ legally protected right to document abuses and unsafe conditions and ordered the chain to cease enforcement of the regulation and to notify all employees of their rights. The complaint was filed by the Food and Commercial Workers and the Worker Organizing Committee of Chicago. (cbsnews.com, Dec. 29) Whole Foods appealed the decision to the U.S. Court of Appeals for the Second Circuit on Jan. 5. Stay tuned.

On Oct. 8, the AFL-CIO and eight U.S. groups supporting women’s rights on the job sent a letter to German Chancellor Angela Merkel requesting that workplace policies of German corporation Deutsche Telekom that have been found to harm women workers in the U.S. be immediately rescinded. The appeal was sent to Merkel because the German government is a major shareholder (30 percent) in DT.

An in-depth Reuters article reported Jan. 7 that the issue is still a hot topic. (“Deutsche Telekom under scrutiny over working conditions at U.S. arm T-Mobile”) However, the German finance ministry refused comment for the article.