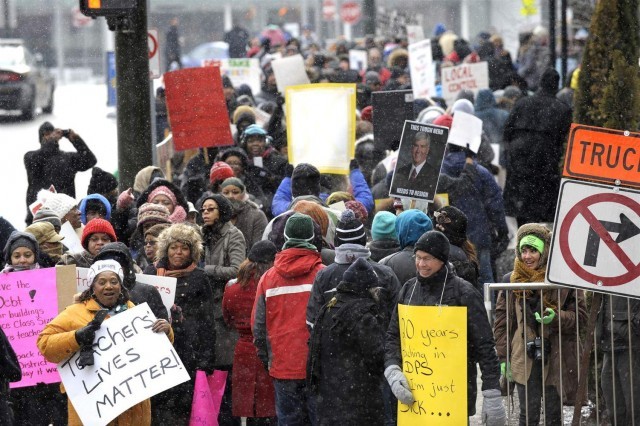 A series of rolling sickouts for several months by teachers across the Detroit Public Schools system culminated on Monday, Jan. 11, with the closure of virtually every school. The sickouts continued during the rest of the school week, while hundreds of teachers and supporters marched on DPS headquarters in Detroit and at the state Capitol building in Lansing, Mich.

The teachers’ actions brought into sharp focus the crisis facing teachers, staff and students in public schools throughout the city and the deplorable conditions these workers and youth face.

More than a half-billion dollars in debt, DPS has been run for years by a state-appointed emergency manager who has usurped the elected school board in all decision making. Teachers, who have taken pay and benefit cuts, are severely understaffed. They often have 50 or more students in a class, with not enough textbooks and amid dreadful conditions.

Teachers and students in crowded classrooms huddle in jackets because of inadequate heat in dilapidated buildings with crumbling infrastructure, often containing black mold and other toxins. Fungi growing on the walls and rodent infestations are not uncommon. Bathrooms, with many of their fixtures missing or broken, have no toilet paper. Supplies are short or nonexistent. Even Mayor Mike Duggan saw a dead mouse and “deeply disturbing” conditions when he made a media show out of touring some of the schools on Jan. 12, the day after 64 schools were closed due to teacher sickouts.

Detroit schools lost 84,000 students, or two-thirds of DPS enrollment, between 2005 and 2012. This was largely due to lack of jobs and the mortgage foreclosure crisis, which struck this majority African-American city with fraudulent subprime home loans, coupled with the proliferation of private charter schools and the opening up of suburban school districts to rob Detroit of many of its highest-achieving students.

Gov. Rick Snyder, a capitalist and reactionary, appointed an emergency manager who took the city of Detroit into bankruptcy. The emergency manager, appointed under a law that guarantees the payment of debt service to the banks, placed the Detroit Public Schools into ­unpayable bonds.

No. 1 priority: Pay the banks

Today, the number one item in the DPS budget is loan repayment and debt service to the banks and financial institutions. In February, the debt service is set to skyrocket (“balloon”), with the total debt up 74 percent from last year and with debt payments representing a whopping 97 percent of DPS’s payroll costs. Debt payments of 10 percent of payroll costs are considered alarming.

Snyder is now under fire for sitting on information and failing to take action while the children and residents of Flint, Mich. — Flint’s EM when that crisis started is the current DPS emergency manager! — have been poisoned by lead and other toxic metals in the city’s water system.

Snyder’s $715 million solution to the DPS crisis? Make up a new system that is debt-free, alongside the current one, to manage the schools where debt is paid down. However, the caveat is that the schools will continue to be run by a board dominated by Snyder appointees. Detroit schools will not return to control by an elected board until 2017, and even then the elected board will be barred from choosing a superintendent.

In addition, the new school board will have no oversight over the many charter schools which have proliferated in Detroit or over the Education Achievement Authority, a special district that manages “underperforming schools.” The EAA has been riddled by corruption and failed to provide students even a minimum education.

Mass actions by teachers, after years of complaints that went nowhere, have finally brought this crisis to the light of day. Teachers, parents, students and community members, including the elected Detroit School Board in exile, continue to fight the state for control of the Detroit schools and an end to the financial crisis and austerity that have brought suffering to so many.