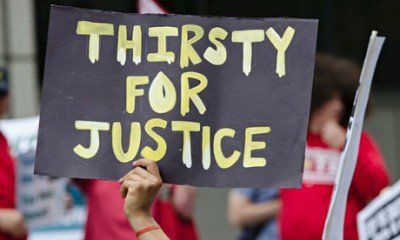 The latest outrage is the admission that an outbreak of Legionnaires’ disease (a type of pneumonia) occurred shortly after Flint began drawing water from the Flint River in 2014. The Centers for Disease Control and Prevention defines an outbreak as two or more cases. From June 2014 until November 2015 there were 87 known cases, resulting in 10 deaths. Only on Jan. 13 did Michigan Gov. Rick Snyder announce that an outbreak had been “discovered.”

While safe to drink, Legionella are water-borne bacteria that affect the lungs when inhaled as droplets or steam. Even Flint residents who stopped drinking the suspicious water could inhale it while bathing. Others who boiled water to eliminate E. coli bacteria could also have inhaled Legionella. E. coli was one of the first contaminants detected in the water after the switch away from the Detroit Water and Sewerage Department (DWSD).

Marc Edwards, University of Virginia professor and water safety expert whose research confirmed that toxic levels of lead in the water were caused by a failure to add anti-corrosion chemicals to the Flint River water, says that the lapse also caused the Legionnaires’ outbreak. “The general idea,” he explained, “is that the lack of corrosion control in the Flint system ate up the disinfectant, the chlorine that’s normally put in the water to kill these bacteria, and it also caused the release of iron to the water.” These two factors allowed Legionella to grow. (Michigan Radio, Jan. 14)

That amounts to murder.

The chemicals that could have prevented both the Legionnaires’ outbreak and the lead poisoning emergency would have cost about $100 a month.

The children of Flint who have lead poisoning will suffer lifelong damage. For over a year, city and state officials told their parents that the water was safe to drink and use for bathing. Dr. Mona Hanna-Attisha, a pediatrician from Hurley Medical Center, was met with derision when she presented findings on Sept. 24 of elevated lead levels in children she tested.

Now the truth is inescapable: The entire Flint population has been exposed to lead-contaminated water, with levels high above the 15 parts per billion that the federal government deems “cause for concern.” “This is a population-wide exposure,” explained Hanna-Attisha. (Detroit News, Jan. 15)

All of the 9,000 children under six, the most vulnerable age group, are assumed to be affected. Lead poisoning affects young brains, impeding intellectual development and causing behavioral disorders. It occurs disproportionately in poor, especially Black and Brown children, who often live in older buildings with lead-based paint. The resulting disabilities put them on a fast track in the “school-to-prison pipeline.”

In Michigan, a young African American with a disability is 25 times more likely to end up in prison than a white youth with no perceived disabilities. The medical costs of early intervention, which can minimize the damage done by lead, are astronomical.

An unknown number of older children and adults will also suffer. Lead can cause hearing and memory loss, kidney failure, high blood pressure, and nerve and digestive disorders. There are concerns about whether inmates housed at the Genesee County Jail were given safe drinking water.

Officials appointed by Gov. Snyder to the Michigan Department of Environmental Quality had stated that anti-corrosion chemicals were unnecessary. The pipes are now corroded beyond repair. It will cost $1.5 billion to repair Flint’s water infrastructure.

On Jan. 5, Gov. Snyder declared a state of emergency in Flint due to forceful community pressure. He “mobilized” the Michigan National Guard, said the media, but only seven soldiers were deployed to deliver bottled water and filtration supplies to 100,000 people in need. The door-to-door campaign is barely underway. People who don’t have cars are walking or bicycling a mile or more to water pick-up sites and then carrying cases of water home in bitter cold.

On Jan. 16, President Barack Obama declared a federal emergency, pledging $5 million — a drop in the bucket — in federal aid.

There is mass concern and outrage. Water rights’ activists and unions are delivering water to Flint. Some Flint residents have filed a class action lawsuit demanding the governor and 13 other state and city officials be tried for negligence; the suit also seeks damages.

The water crises in Flint and Detroit, where tens of thousands of households have no water or face shutoffs, have united water rights’ activists in both cities. Dozens of Detroiters have attended rallies in Flint. Activists from around Michigan occupied the State House rotunda on Jan. 13.

Celebrities like Cher, who drew headlines suggesting Snyder deserved the firing squad, and Flint native Michael Moore have spoken out. Moore blasted Snyder at a Jan. 16 rally in Flint. Cher and Moore have donated water.

The militant activism of Flint group Water You Fighting For made public the city’s water crisis. These activists brought a delegation to Detroit’s Martin Luther King march on Jan. 18.

“Nobody should have to be living like this,” declared Kerry Wheeler, a mother of an 11-year-old. (Detroit Free Press, Jan. 17)

Flint, Detroit and the banks

The other new outrage is that Flint will begin shutting off water to some 1,800 households that are behind in their water bills. Some residents refuse, on principle, to pay for water they cannot drink or use for washing. Others cannot afford the high rates — the highest in Michigan — when they have to buy bottled water. None of the purported $12 million saved annually by unhooking from Detroit’s water system was passed on to water users.

All of Genesee County, encompassing Flint and its suburbs, will eventually join the new Karegnondi Water Authority that will bypass Detroit and draw water directly from Lake Huron. Only Flint was switched to the polluted Flint River in 2014, while the rest of the county stayed with Detroit’s water system. When Gov. Snyder finally ordered Flint to reconnect to Detroit’s water supply in October, the damage had already been done.

A spin on why Flint’s emergency manager decided to drop DWSD early is that Detroit was raising water fees to fund its post-bankruptcy turnaround. All of the outlying town governments that purchase water from DWSD, including Flint, buy it at wholesale and sell it at retail, generating funds for budgetary items. But when rates go up, Detroit is scapegoated. This pits two of Michigan’s poorest cities — both with an African-American majority and a poverty rate near 40 percent — against one another.

Both city budgets, including funds allocated to water departments, are drowning in obligations to bondholders. Flint’s water debt is around $20 million, with $2.2 million due each year to the banks. Now this predatory debt is being used to justify the shutoffs!

Kristen Moore, Flint’s public relations director, wrote, “Per state law, the city must set rates and charges for the city’s water system in order to provide revenue sufficient to maintain ongoing operations and maintenance of its system as well as payment of outstanding bond payment obligations.” (Detroit News, Jan. 15)

Public Act 436, the law granting broad executive powers to governor-appointed emergency managers to oversee cities and school districts in financial distress, mandates that banks be paid before any other budgetary items are considered.

The racist looting of Detroit’s assets, carried out by Snyder-appointed Emergency Manager Kevin Orr during the city’s bankruptcy in 2014, includes the absorption of DWSD into the suburb-dominated Great Lakes Water Authority. Detroit’s water department still owes billions of dollars to the banks, including $537 million in fraudulent interest rate swaps. DWSD’s loss of Flint, its largest customer, as ordered by another governor appointee, is part of the plan to undermine DWSD and make it ripe for takeover by the GLWA, which is a potential bridge to privatization.

Veolia Corporation, named as a “cost-cutting consultant” to the GLWA, has set itself up to appear as a rescuer of the troubled water departments of Detroit and Flint. This French-based transnational company is involved in everything from mass transit to water to helping polluters cover their tracks, and specializes in austerity.

In March 2015 Flint’s emergency manager ordered the city to pay Veolia $40,000 for a 160-hour study of the city’s water issues. Residents had complained for almost a year about rashes, hair loss and other health issues. Veolia recommended $3 million in chemical additives and filtration improvements after a spike in trihalomethanes (THMs) violated the federal Clean Water Act.

The rise in THMs, carcinogens that cause genetic mutations and miscarriages, was caused by the use of chemicals to kill E. coli. Veolia recommended anti-corrosive chemicals — but only to treat “aesthetic” concerns about the water’s foul color, odor and taste. The possibility of lead poisoning and Legionnaires’ disease due to the water’s corrosive quality was not mentioned in Veolia’s report. The 11-page, $40,000 document ignored the obvious: Go back to Detroit’s water system.

Veolia should pay for its role in poisoning Flint. Instead, Veolia is in a prime position to win a lucrative water contract in both Flint and Detroit. Flint cannot pay for a new water infrastructure, and Detroit’s water department is billions of dollars in debt.

A case against capitalism

Try as they might, all the governor’s men and women can’t put things back together again. The whole world knows of their crimes.

The fight for water justice won’t be won, however, by causing a few politicians’ heads to roll. Ultimately, the poisoning of Flint was caused by the capitalist system that puts profits ahead of people and the environment.

The Flint River was a pristine flowing river from the time of the glacier melts about 10,000 years ago. It was Flint’s water source until 1966. By then it had become so polluted that Flint had to turn to Detroit for water access. How was this allowed?

There was no mass environmental movement, and the Environmental Protection Agency had not yet been established. Flint was General Motors’ birthplace and still beholden to the auto corporation. Who was going to stop GM from dumping industrial waste into the Flint River?

GM has left a 100-year legacy, where their now-closed plants once stood, of arsenic, chromium, mercury, lead, solvents and other toxins that will take centuries to dissolve. The auto corporation’s 2009 bankruptcy relieved the new GM of any obligation to clean up “Old GM’s” mess.

If cash-starved Flint needed to cut costs and draw water from a river which is still badly polluted, who has impoverished the city? When GM closed nine of its 10 Flint plants, the city lost its prime source of tax revenue. Foreclosures caused by predatory lending have eroded property tax income. Debt to the banks is eating away at the city’s budget. This is all because of the capitalists’ golden rule: profits first!

The poisoning of Flint was due to a convergence of economic and environmental devastation that — like the presence of lead in the water supply — was entirely preventable. It is not the first time a community has been poisoned by capitalist greed and austerity. Only a socialist revolution can make it the last.