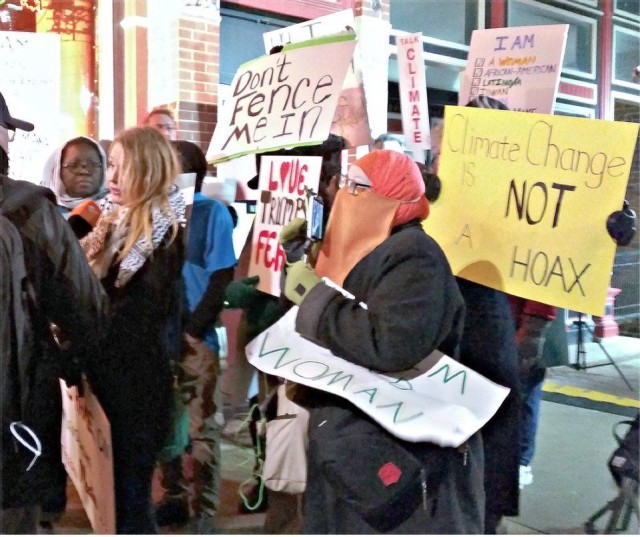 Over 30 demonstrators rallied before dawn at Java Joe’s Coffeehouse to protest the real estate billionaire for his “racist, anti-immigrant, anti-Muslim rants” during an interview with cable news talking heads Joe Scarborough, Mika Brzezinski and Willie Geist of MSNBC.

Trump’s interview was part of his recent campaign stop in the Hawkeye State weeks before the Iowa caucuses on Feb. 1. “I really want to win Iowa,” Trump told the audience. Demonstrators inside and outside the building wanted to make it clear that he was in a minority in that regard.

During Trump’s on-air interview, his opponents loudly chanted, “Stop the Hate!” which led to hostile comments from the “Morning Joe” hosts. Brzezinski said: “Get them out. Don’t give them their coats.” Scarborough joked: “It’s minus 80 out there and meteors are coming down. Throw them out.”

The rally was organized informally by local activists. Groups represented included the American Friends Service Committee, Des Moines for Palestine, Iowans for Bernie Sanders and others.

Two days prior to the demonstration, AFSC Iowa Program Coordinator Kathleen McQuillen told Iowa Free Press that if Trump “chooses to use hateful, abusive language there are people everywhere who will stand up to expose and oppose his hostility.”

Trump calls for building a wall on the border between Mexico and the U.S., for assassinating family members of suspected terrorists and for herding Muslims into internment camps. He has been endorsed by the White Nationalist group American National Super PAC and former grand wizard of the Ku Klux Klan, David Duke.

“It is worth noting that there would be less need for protests if the mainline media would do their jobs,” McQuillen told WW.

Demonstrators carried signs with slogans like “Don’t Fence Me In,” “Climate Change is Not a Hoax,” and other rebuttals to the candidate’s fascist-like comments.

“There have been demonstrations in other cities and I hope they will continue as long as any of the candidates demean and scapegoat specific populations,” McQuillen said.