On Jan. 14, much of the world watched in shock and anger the announcements of the nominations for the upcoming 88th annual Academy Awards, also known as the Oscars, which recognized virtually all white acting performances.

Most notable snubs included Will Smith for “Concussion,” Michael B. Jordan in the title role of “Creed,” Samuel L. Jackson for “The Hateful Eight” and Idris Elba for “Beasts of No Nation.” On top of these gross omissions, not one Black director was nominated, including, for instance, Ryan Coogler for “Creed.” The only actor nominated for “Creed” was white actor Sylvester Stallone.

The popular and critically acclaimed “Straight Outta Compton,” a biopic about the hip-hop artists group N.W.A., garnered only one award for best original screenplay — for its white writers. The film’s African-American director, F. Gary Gray, was also overlooked by the Academy. The only real bright spot was the best documentary nomination for the astonishing “What Happened, Miss Simone?” on the life of the late, great, artist and political activist Nina Simone, co-produced by her daughter, Lisa Simone.

Once the 2016 nominations were made public, the Twitter feed #OscarsSoWhite exploded with disappointment and strong criticism, as it has in past years.

Chris Rock, the Black comedian and host of the upcoming Academy Awards show on Feb. 28, was also very critical of the nominations and has threatened to curse during the show.

The actor and producer Jada Pickett Smith wrote on Twitter: “At the Oscars … people of color are always welcomed to give out awards … even entertain, but we are rarely recognized for our artistic accomplishments. Should people of color refrain from participating altogether?” To take this even further, white Academy members should also participate in a boycott of the Academy ceremony to show anti-racist solidarity.

Director Spike Lee, who received an honorary Oscar in November for more than 30 years of filmmaking, stated on Jan. 14: “We may win an Oscar now and then, but an Oscar is not going to fundamentally change how Hollywood does business. I’m not talking about Hollywood stars. I’m talking about executives. We’re not in the room.” (New York Times, Jan. 15)

Black women actors like Viola Davis, Taraji P. Henson, Kerry Washington and others have found steady acting on TV thanks to Black producers, creators and writers like Shonda Rhimes and Lee Daniels.

In an article written by this author on March 1, 2012, entitled, “Why ‘Viola Davis was robbed’ of an Academy Award,” the main focus was the racist and sexist character of the Academy’s membership. Not much has changed four years later except for an increased count of Academy members, who now number over 6,100. Just a handful of new members are people of color, including immigrants. Below are excerpts from that article; go to tinyurl.com/WWViolaDavisOscars to read the entire article. 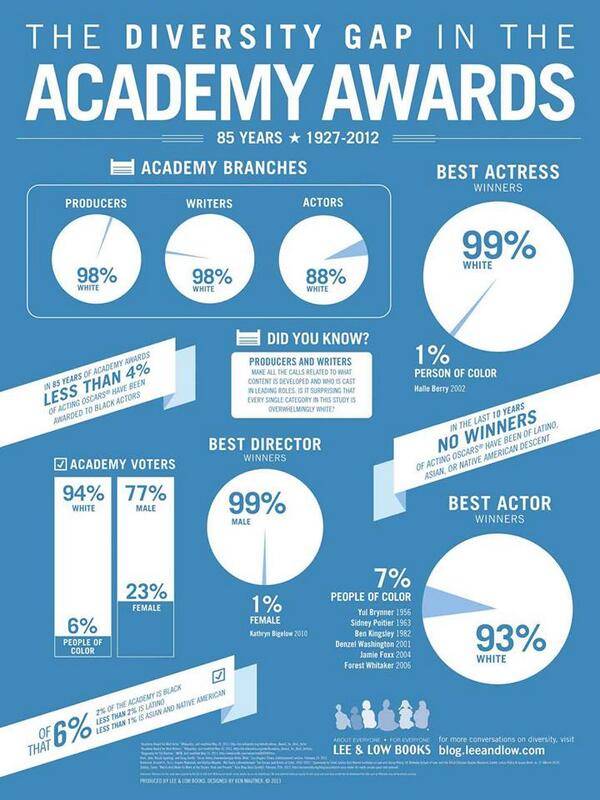 “On Feb. 19, [2012] the Los Angeles Times published an extensive study entitled, “Unmasking the Academy: Oscar Voters Overwhelmingly White, Male,” which exposed institutionalized racism. The article states that out of the 5,765 voting members of the Academy of Motion Picture Arts and Sciences, 94 percent are white and 77 percent are male. The eight-month study was based on interviews of Academy members and their representatives, which helped to confirm the identity of 89 percent of the present membership.

“The Academy includes selected people who work in front of and behind the camera. Only 2 percent are Black and less than 2 percent are Latino/a. Is it any wonder there have been only five African-American actors in the Academy’s 84-year history to win best lead actor awards? They are Sidney Poitier, Denzel Washington, Jamie Foxx and Forest Whitaker; Halle Berry is the only African-American woman.

“Sexism is also rampant within the Academy. According to the Writers Guild of America, women made up a mere 17 percent of employed writers in 2011. Martha Lauzen, in a San Diego State University study, stated that in 2011, women made up 18 percent and 9 percent of the Academy’s producer and director branches, respectively.

“The median age of all Academy voters is 62. Fourteen percent of voters are under the age of 50. Academy membership is for life, whether members still work or not.

“Out of the 43 members of the Academy’s powerful board of governors, only six are women, one of whom is the only person of color on the board.

“The Academy reflects the racism and sexism that is prevalent throughout U.S. capitalist society, from those who control Wall Street’s profits to those who dominate the big-business parties of the Democrats and Republicans. “The Academy, since it was founded in 1927, has paid only lip service to promoting affirmative action throughout the film industry for people of color and women.