Argentina’s rightist government, led by newly elected President Mauricio Macri of the Cambiemos political coalition, has terminated the employment of 10,000 federal and state employees in the first seven days of 2016. Macri won the second round of a close election against Daniel Scioli of the center-left faction of the Frente para la Victoria (an electoral front) and the Justicialista Party  (a continuation of the Peronist Party) in November. 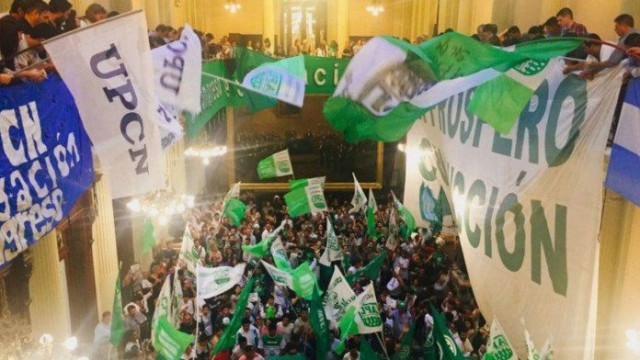 From May 2003 until last November, former President Nestor Kirchner, who died in 2007, and his widow, President Cristina Fernandez, had set the tone for Argentine politics. While not challenging the capitalist system, they implemented a moderate social democratic program that provided some benefits for the poor and the working class — compared with the neoliberalism of the 1990s — and maintained some independence of Argentina from U.S. imperialist domination.

Cambiemos is a coalition of market oriented Argentine business elites that openly promises neoliberalism and closer adherence to U.S. interests. In brief, neoliberalism means using government to shift wealth from the poor and workers to the capitalists and foreign investors. The shift in Argentina is part of a wave of U.S. instigated attacks on progressive and pro-socialist governments in Latin America, especially Venezuela and Bolivia but including Brazil and Argentina.

Immediately after Macri entered office on Dec. 10, he and the newly appointed cabinet of ministers created a new ministerial office termed the “Ministry of Modernization.” This ministry was to “review” the jobs of 24,000 public sector workers. Then, on Jan. 6, some 10,000 of these employees were laid off.

One of the first acts of a neoliberalist regime in any country is to implement a “downsizing” of the public sector. This includes cutting any social welfare and/or safety net program that is typical of the capitalist welfare state, but which they find no longer sustainable. This recipe is the modus operandi for capitalism at a dead end. It demands austerity for the workers and a government that follows the dictates of the World Bank, the International Monetary Fund and other imperialist mechanisms.

The Macri campaign’s promises to his capitalist and imperialist promoters are reflected in the words of his vice president, Gabriela Michetti, who called the fired workers “political activists” appointed by the former government and promised to get rid of them. (Telesur, Jan. 6)

It is common in any capitalist government where different parties replace each other to purge the public appointees as well as elected officials of the defeated opposition party. The actions of the Macri regime, however, target  masses of public worker jobs for the chopping block, and not so much the administrators. Michetti derogatorily referred to these workers as being “ñoquis” (a pasta dish), that in colloquial terminology is used to describe “unproductive public service workers.”

Both the Union of Civil Employees of the Nation (UPCN) and the Association of State Workers (ATE), representing tens of thousands of public workers, took to the streets to protest the cuts as an injustice. TeleSUR reported that  ATE leader Hugo Godoy labeled the cutbacks “a grave situation” and stated, “The union is preparing to take further steps to secure labor stability for the country’s 3 million public sector workers,” including 600,000 who are marginally employed.

Godoy added, “We are in a state of alert and mobilization and are taking measures everywhere there are layoffs.”

On Jan. 8, ATE declared a national strike against the government and its plan to destroy public jobs and devalue the currency amid future plans to open up the country to more foreign transnational companies. These actions are consistent with Cambiemos’ pliant and conciliatory prostration before monopoly capitalism and imperialism.

In Argentina’s La Plata municipality, police attacked strikers with tear gas and rubber bullets that left several wounded. According to the Jan. 9 newspaper La Nación, “The workers were protesting a decision by local mayor Julio Garro that cancelled the 4,500 contracts on Dec. 31.”

Both ATE and UPCN have petitioned for an injunction to suspend Michetti’s actions. What is clear is that the tension within the context of class conflict is growing and is already moving past the setback at the ballot box to a struggle in the streets and workplaces.