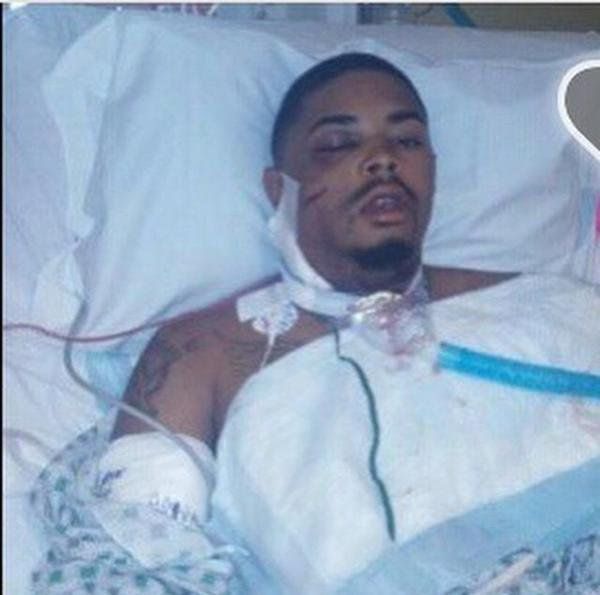 Baltimore police officers shot a 24-year-old African American, Keith Davis Jr., twice — once in the face and once in the arm last June 7. Police had chased Davis into a garage where they fired at him 44 times. After shooting Davis, police proceeded to charge him with robbery.

The Baltimore Sun reported that officers Catherine Filippou and Lane Eskins had received a call at 10 a.m. that day about a car accident. Responding to the call, the officers were informed by an unlicensed cab driver that he was being robbed. The cops charged Davis with the robbery.

Davis’ family members and supporters assert that Davis is being framed for a crime he did not commit. Davis says that he did not rob the driver and that he was among a group of spectators at the scene of a hit-and-run accident when an officer arrived with his weapon drawn and pointed it at the crowd.

“It wasn’t [pointed at] Keith in specific; it was at the crowd,” explained Davis’ fiancée, Kelly Holsey, in a Jan. 9 interview with RT: “As a result, the crowd scattered. Davis and some others sought shelter at a nearby auto garage. Davis was then shot in the arm and called Holsey. Holsey described hearing a ‘constant pop-pop-pop’ while Davis told her, ‘Babe, I’m gonna die.’ ” (tinyurl.com/huqybb5) Holsey said the call lasted one minute and seven seconds; she heard one last gunshot and then the call dropped.

Davis was taken to a hospital to be treated and at first was not charged. The police gave no information as to his whereabouts. This pointed to there being no evidence to support a reason for the police to have shot Davis twice — let alone firing 44 shots in a garage where there were bystanders. The cops finally arrested Davis at the hospital and charged him with armed robbery.

They claim that Davis fired a 22-caliber gun at them, but a 22-caliber gun found in the garage had not been fired and didn’t have Davis’ fingerprints on it. In addition, the driver who reported he was robbed never identified Davis as the assailant.

On Jan. 8, the state was granted a third postponement in the Davis case. Prosecutors said they were unprepared to present evidence. The officers involved in the case have yet to give formal statements about what exactly happened on June 7, but the police added another indictment of Davis. According to Davis’ lawyer, since the prosecution had already been given two postponements and was supposed to go ahead with the trial, the new indictment was simply a tactic to delay the proceedings.

Supporters of Keith Davis gathered outside the courthouse after the postponement and decided to march over to the office of Baltimore State’s Attorney Marilyn Mosby to demand that charges be dropped. The Baltimore Bloc and the People’s Power Assembly have been attending the court hearings and plan to keep the pressure on until the charges against Keith Davis Jr. are dropped.