The following article is reprinted from Fightback!News. See fightbacknews.org, Dec. 24.

Just two days before Christmas, Dec. 23, and despite a failed lawsuit that asked courts to force organizers to cancel, Black Lives Matter protesters descended on the Mall of America to protest the police murders of Jamar Clark and other African Americans. 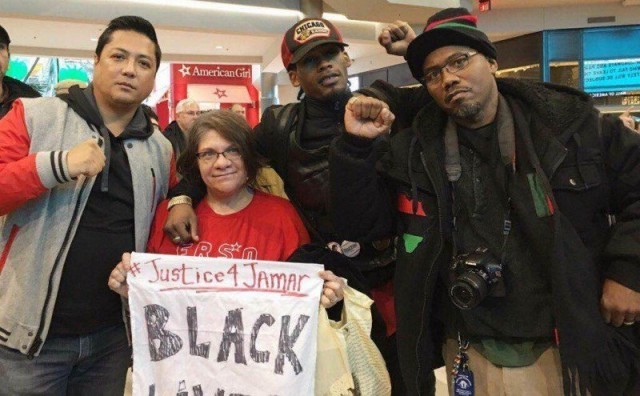 Hoping to intimidate protesters, MOA security checked the bags of everyone entering the mall and locked all stores on the east side of the mall. Stores announced they would close “because of the Black Lives Matter protest” and said shoppers who didn’t leave the store would be locked inside.

Hundreds of police from several metro area departments, wearing riot gear or bulletproof vests and wielding three-foot long batons, set out barricades around the rotunda, which was decorated with 44-foot-tall silver Christmas trees. Just as the police put the mall on lockdown, protesters put their fists in the air and marched silently out of the mall to board trains to the Minneapolis-Saint Paul International airport, where both terminals were shut down. Major roads and light rail service were also disrupted.

According to organizers, “We have endured an armed white supremacist terrorist attack where five of us were shot; police violence in the form of mace, batons and less lethal projectiles; over 50 arrests on highway 94 and at the Fourth Precinct; and freezing temperatures to demand justice for Jamar Clark. If it’s not clear yet: We won’t stop until we get it.” They demand release of the tapes of the police killing; prosecution of the police involved; federal domestic terrorism charges against white supremacists who shot five protesters; and “disinvesting from police and investing in Black futures.”

Youth out in big numbers

The protest comes two days after a grand jury in Texas gave the decision not to indict Sandra Bland’s killers. This is why the Minneapolis demands [are] not just prosecution of the police who killed Jamar Clark, but a special prosecutor and no grand jury.

This was a coordinated effort nationwide to disrupt airports and public transit. Other actions happened in Washington, D.C., San Francisco, Chicago and Chattanooga, Tenn. At the airport, Black Lives Matter Minneapolis said they wanted to bring attention to the “airport’s discriminatory profiling practices against Black people and anyone who is perceived to be Muslim, as part of a larger system that continues to kill and harm Black people without any justice. The continued relentless violence against Black people is appalling and morally repugnant. The fact that Black people get constantly harassed by police forces at every level, local and federal, in airports, malls, and on the streets of America is no longer acceptable.”

Youth were out in big numbers at this particular protest, including at Terminal 2 (formerly called the Humphrey Terminal), where they led chants.

Arrests were made at both the mall and the airport, including Alex Clark, a cousin of Jamar Clark. “As we were marching out of the mall with everyone else, police came up, called Alex by name, and placed him under arrest, claiming they had a warrant. They refused to say where the warrant was from or where they were taking him,” said his friend Jess Sundin, of Freedom Road Socialist Organization. “There’s no way he was pulled from the crowd because of any warrant. Alex was targeted because he’s been leading the fight to win justice for his cousin.”

Clark and most of those arrested were released [the same] night, but one protester is being held without charge. According to Betsy Foxman, “David has not been charged with anything but is on a 36-hour probable cause hold. He needs to be charged with something so bail will be set and he can be released on bail.”