Jan. 4 — The spread of human beings to every continent on our planet has been accompanied by great challenges and great innovations. Homo sapiens became the dominant life form around the globe because of our ability not only to adapt to our environment — all species have adapted, evolved or perished — but also to change the environment itself to meet our needs.

So successful have we become at altering the environment that now it appears this has turned into its opposite. Global warming and climate change, resulting primarily from industrial growth and the burning of fossil fuels, pose enormous dangers not only to humans but to a wide array of animal and plant species. 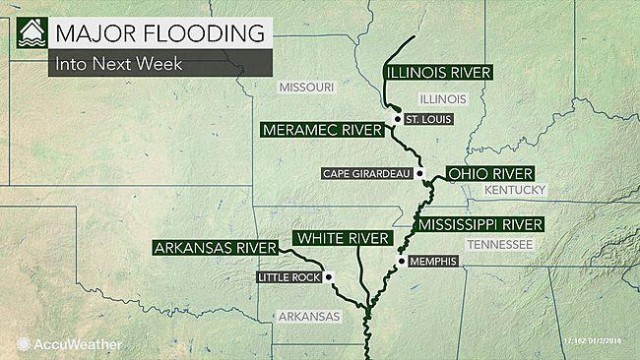 People in some of the most developed countries were reminded of these dangers in late December and early January as flooding in the Mississippi Valley and throughout Ireland, Wales, England and Scotland reached historic proportions.

These floods were not the worst to affect large populations in recent years — there have been much bigger disasters in Asia, Africa, and Central and South America — but they show that extreme weather, predicted for decades by climate scientists, is indisputably underway, and will spare no country.

In the United States, the Mississippi River and its tributaries, after heavy rains instead of the usual seasonal snows, reached record flood levels in some areas at the end of December, leading to widespread destruction in Illinois, Missouri, Oklahoma and Arkansas. More than two dozen deaths have been reported so far.

More flooding is expected over the coming weeks as the crest in the river moves downstream to Tennessee, Mississippi and Louisiana.

Starting on Dec. 30, the storm, which British meteorologists named Frank, battered the coastal and northern parts of Ireland, Wales, England and Scotland for several days with high winds and drenching rain, before turning further north, toward Greenland. While damage was widespread, deaths appear to have been kept to single digits. A final accounting was not available as of this writing.

As it veered farther north, Storm Frank also brought rain and melting temperatures to areas above the Arctic Circle — an unheard-of scenario during the North Pole winter. Scientists maintain that the severity of the disasters in both the U.S. and Europe can be traced to global warming, which has pumped moisture into the atmosphere. Last year, 2015, was the warmest year on record.

Young people now in college weren’t even born yet when climate scientists first began to present the alarming news about greenhouse gases and global warming to the world. This finally led, in 1997, to the Kyoto Protocol to the United Nations Framework Convention on Climate Change, which was agreed to by 36 industrialized countries, including the U.S. That protocol committed them to reduce their greenhouse gas emissions to 7 percent below their 1990 level by 2008-2012.

The U.S. government signed the protocol in 1998 — but never ratified it, unlike the other 35 signatory countries. Then George W. Bush openly repudiated the agreement in March 2001, the first year of his presidency. Without the U.S., at the time the biggest polluter in the world, the protocol would have little effect. So as far as the U.S. was concerned, the Kyoto Protocol was dead on arrival.

The blanket of carbon dioxide in the earth’s atmosphere continued to rise steeply.

The story of the growing threat posed by global warming, while certainly not ignored by the capitalist media, is rarely if ever linked to the wars of the last quarter century: the war against Iraq, begun in 1991 under President George H.W. Bush; the invasion of Afghanistan in November 2001 (a war which continues to this day) after Bush’s repudiation of the Kyoto Protocol; the second Iraq war begun in March 2003, again by the junior Bush; and the current war against the government of Syria, begun late in 2011 under Barack Obama by opposition forces supported by the U.S. and Saudi Arabia.

Also not mentioned in connection with the climate threat is the war to destroy the government of Libya. That North African country had raised its standard of living to the continent’s highest.

In all these conflicts and others in Africa and Asia, control over the world’s oil has been a major factor. And petroleum, after coal, is the major source of greenhouse gases.

These wars have killed hundreds of thousands, displaced millions of people, and cost trillions of dollars — money that could have been used during this critical period, when scientists knew what was happening, to restructure energy production, transportation and housing to reduce the burning of fossil fuels.

Nothing inevitable about climate change

The disasters now facing much of the world were not inevitable. They are not punishment for “man’s greed and sins.” They don’t arise from overpopulation or humanity’s “hubris.” They are the product of the growth of the productive forces under a particular political and economic system: capitalism, which took root only a few centuries ago.

Earlier societies had their environmental problems, too. But even though technology then was at a much lower level, the people came up with ways to do what was needed to ensure food sources and shelter.

One of the most remarkable undertakings — started 2,250 years ago in China during the Qin dynasty — was a massive land reclamation and flood control project that involved diverting water from the Min River, which periodically flooded uncontrollably, to the other side of a mountain range where the soil was good but too dry to farm.

To break through the mountain, workers for seven years burned piles of hay on the surface of the rocks to make them hot and then poured cold water to cool them rapidly, “letting the nearly instant contraction crack them open. The cutting eventually led to an opening 70 feet wide, and the Min River waters … began to course through it the moment the final wall was broken open.” (From “The Man Who Loved China,” a book about Joseph Needham, a British scientist sympathetic to the Chinese Revolution who spent the early 1940s accumulating massive data about China’s early scientific discoveries.)

The anniversary of this event is celebrated to this day in China, as it brought stability to an area that had known devastating natural catastrophes and resulting famines.

The Min River project showed that the people, when mobilized and motivated to solve a huge problem, have the persistence and ingenuity to do whatever it takes to win success.

The question we have to ask in light of today’s disasters and rising threats is this: Knowing what we do now, what is standing in the way of taking meaningful action to prevent the worst from happening?

Next: An economic and social system in rapid decline.