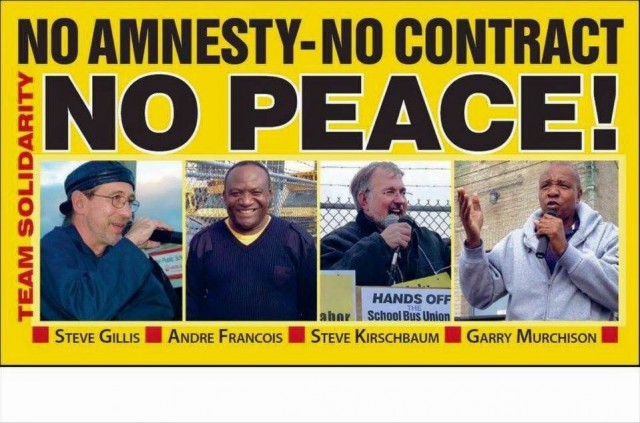 Dec. 22 — After more than two years of hard-fought struggle, the militant, fighting rank and file of the Boston School Bus Drivers Union — United Steelworkers Local 8751 — have won a historic victory against global giant Veolia/Transdev, one of the most notorious capitalist union busters, and Boston Public School bosses, Boston Mayor Marty Walsh and their media mouthpieces.

Four fired union leaders, out of work since October 2013 on bogus charges of leading a wildcat strike, are going back to work. Transdev bosses were bound and determined that the four would never return. But at 4 p.m. on Dec. 18, after a marathon 25-hour negotiating session, Veolia and city bosses signed comprehensive settlement agreements with the union that reinstate President Andre François, Vice President Steve Kirschbaum, Financial Secretary Steve Gillis and Grievance Chair Garry Murchison.

In addition to reinstatement of the four with full seniority rights and a substantial monetary payment, the local won a contract with economic justice and the protection of 40 years of the collective bargaining process. The contract will be fully retroactive on all wages, pensions and benefits.

The workers will get an immediate 5.5 percent raise and collectively more than $1.7 million in back wages, going back to the contract expiration date in 2014. Retirement, which will now be after 30 years’ service with no age requirement, has substantial increases in severance payment and benefits. There are other gains too numerous to list.

The set of agreements also protects the previously union-run pension plan, which was under attack, and allows the union to immediately enter into grievance settlement directly with the city, without Veolia’s interference, for nearly 700 grievances resulting from three years of Veolia’s contract violations.

The union/job security guarantee with the city, which mandates that any future company or the city must accept the workers and the full union contract, is extended to 2019. Local 8751 beat back the introduction of radio chip-implanted tracking badges and the use of biometric technology to spy on workers and also successfully fought to get as much union protective language as possible to restrain the newly introduced spy cameras on the buses, which have become a most regrettable fact of transportation work life. The union plans to continue the battle against the cameras in alliance with the parents and community in the next period.

This long struggle was led by the fighting Team Solidarity, whose François-Kirschbaum slate swept the union elections in April 2015, after political frame-up charges against Kirschbaum fell apart in court. The whole rank and file was ready to walk out at a moment’s notice if necessary. “Will strike if provoked” was the slogan on the back of the Team’s popular T-shirts and hoodies.

Team Solidarity was not fighting in isolation. The struggle to rehire the four union leaders brought in many allies who know Local 8751’s consistent and principled activism against racism and austerity as well as its internationalism and labor solidarity.

Boston school bus drivers, who are 98 percent Haitian, Cape Verdean, African-American, Latino/a and other workers of color, battle racism on and off the job every day. They won the support of Boston’s most prominent labor and Black community activists, who, seeing the racist, union-busting character of the attack on a majority-Black union, coalesced together for the first time to win justice for the fired leaders.

The last 25-hour session accurately reflected the forces in this historic battle. On the union side were the fired four, the Team, lawyers and staff of the Steelworkers International, and community leader Chuck Turner via phone. On the management side were Veolia’s local, national and international bosses, including the infamous Thomas P. Hock, whose think tank has been breaking transit unions for 40 years; the top brass of Boston Public Schools; and Mayor Walsh and his staff and chief financial officers.  The Team was able to keep them from leaving the hotel where the negotiations occurred and made them stay up all night.

This was truly a fight to defend the historic leadership role of Workers World Party in the union, which WWP members helped found four decades ago. The Veolia bosses and the city bourgeoisie made it clear that their chief and most critical goal was to drive the reds out of the union, jail them and send a message to the rank and file and the union movement as a whole that radical union activism is a thing of the past.

Immediately after the alleged wildcat — which was really an illegal lockout on the part of Veolia — the Boston capitalist media ran vicious red-baiting articles attacking Kirschbaum for being a member of Workers World Party; Gillis is also a member. But the bosses messed with the wrong union — and the wrong revolutionary, multinational, working-class party.

Workers World Party sent delegations from around the country to help with organizing ongoing community support and solidarity. Fundraising efforts made it possible for the four fired leaders to survive more than two years without a paycheck.

The union, knowing they had the full support of Workers World comrades, literally beat back every onerous condition the bosses attempted to attach to the reinstatement settlement, including outrageous restrictions on political organizing, contract concessions and selling out the backlog of grievances.

Once the agreements were signed, all that was left was for the membership to ratify the contract. This happened tonight at a mass, standing-room-only union meeting. The vote was unanimous. That means the next day, two days before Christmas, the fired leaders could go back to work.

With both the rank and file and the community behind them, and buoyed by the solidarity of WWP, Local 8751 beat the odds and delivered a stunning blow to the racists, red-baiters, union-busters and austerity-mongers in the Boston political establishment and the hated Veolia Corp. that they employed to carry out their attack.