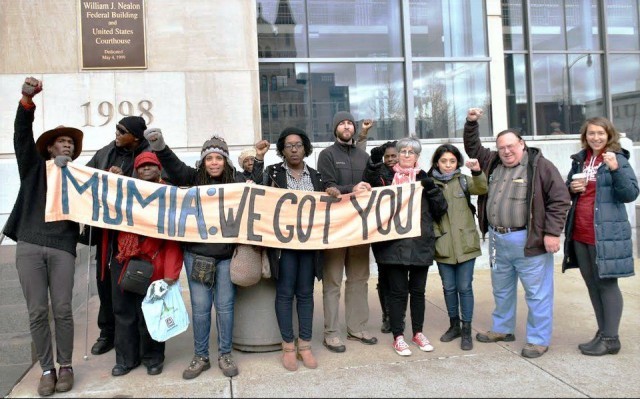 Scranton, Pa. — It was a full-court press by supporters of political prisoner Mumia Abu-Jamal as he brought his case seeking proper medical care to treat the hepatitis C virus against the Pennsylvania Department of Corrections to U.S. District Court in Scranton, Pa., on Dec. 18. Abu-Jamal is suing the DOC and doctors at SCI-Mahanoy for intentional medical neglect and malpractice, violations of the Eighth Amendment’s protection against cruel and unusual punishment.

Nearly 80 people packed the main courtroom where the evidentiary hearing was held before U.S. District Court Judge Robert Mariani. Dozens more supporters watched the proceedings in an overflow courtroom. Around 20 people maintained an all-day demonstration outside in the cold, handing out fliers and explaining what was happening inside the court to residents of this economically depressed town.

Abu-Jamal testified via video hookup from SCI-Mahanoy, assisted by attorneys Ashley Henderson and Nikki Grant, of the Amistad Law Project. It was the first time Abu-Jamal has been able to speak in court on his own behalf in decades. In court Bret Grote, of the Abolitionist Law Center, questioned Abu-Jamal. Attorney Robert Boyle questioned Dr. Joseph Harris, who gave expert medical testimony, stating that most of Mumia’s health problems can be linked to untreated acute hepatitis C, which is curable with new antiviral drugs.

Early in the day, Judge Mariani ­denied a motion by Laura Neal, the DOC’s legal counsel, requesting dismissal of the hearing. Neal claimed Abu-Jamal failed to exhaust all of the prison’s grievance procedure requirements and that he hadn’t specifically asked for HCV treatment in the grievance. The judge reminded Neal that the DOC had all of Abu-Jamal’s health information in May of 2015 and called Neal’s argument “a tortured view of what is required of an inmate in a grievance.”