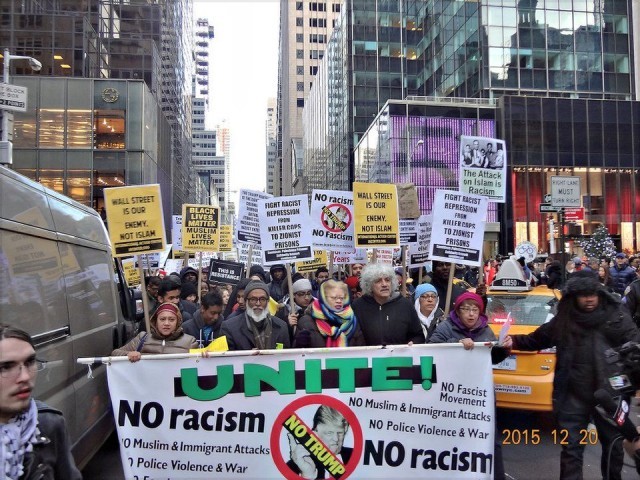 Hundreds of people from the various communities and organizations that reflect New York City’s working class gathered at Fifth Avenue and 56th Street at the Trump Towers on Dec. 20 to say “No to Trump, no to racism and immigrant bashing, no to Islamophobia, no to war.” Donald Trump has focused on a racist message in his public statements and his campaign rallies have opened their doors to some of the most reactionary fascist elements in the country.

If there was one central message of the protest, it was the call for unity in the struggle against racism. For two hours people representing the different groups came to the microphone and gave a shout out for unity of the working class and all oppressed communities. Many Muslims were present, with their mosques or organizations, and gave a strong message that they could stand up proudly without having to apologize before the attacks of Islamophobes like Trump.

Following the rally, the demonstrators marched to Sixth Avenue and then downtown to protest at the headquarters of Fox News, the Wall Street Journal and the New York Post. They targeted these corporate media for the support they have given to Trump’s reactionary and racist ideas. The organizers from the International Action Center and other organizations said at the rally they consider today’s action “just a beginning” in the mobilization to stop Trump and others like him.