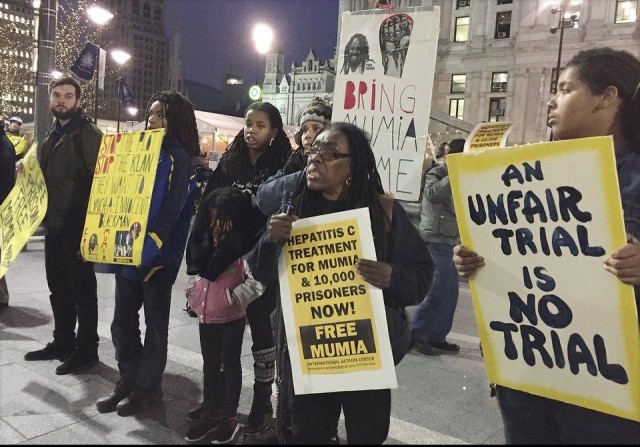 Around 170 million people globally are chronically infected with the hepatitis C virus. Left untreated, HCV causes liver disease and other complications that kill 350,000 to 500,000 people every year.

In the U.S. an estimated 3.2 million people have chronic HCV infection. According to the Centers for Disease Control and Prevention, most won’t feel ill or even know they are infected until it is too late.

U.S. numbers might be substantially higher if prisoners were included. However, federal and state prisons, while routinely screening for HIV-AIDS, do not test for hepatitis C. Prisoners returning to their communities upon release can unknowingly contribute to the spread of this disease, a major cause of death in many African-American and poor communities.

In 2013, the U.S. Food and Drug Administration approved the new direct-acting antiviral drug Sovaldi with a 90 percent cure rate for HCV — almost double that of previous treatments. But here’s the catch: Gilead Sciences, which acquired the drug through a takeover of Sovaldi’s developer, Pharmasset, priced the drug so high few could afford it.

An 18-month federal study of Gilead’s price practices, released Dec. 1, found no evidence that research and development costs or even the multibillion-dollar purchase of Pharmasset factored into how Gilead priced the drug. Senate Finance Committee members Ron Wyden (D-Ore.) and Chuck Grassley (R-Iowa), who oversaw the investigation, determined that Gilead had set the initial price of Sovaldi as high as the market would bear so it could charge even more for Harvoni.

Gilead’s price speculation has resulted in heavy burdens for Medicare, Medicaid and the Bureau of Prisons, which are all limited by federal law from negotiating for lower drug costs. The result has severely restricted access to the drugs for HCV-infected patients whose lives depend on the new treatment.

Few if any prisoners get these drugs. This has resulted in several lawsuits on behalf of prisoners, including one filed by Pennsylvania political prisoner Mumia Abu-Jamal, who was recently diagnosed with complications resulting from HCV but was denied the new drugs.

On Dec. 18, an evidentiary hearing requested by Abu-Jamal will be held in Scranton, Pa. Abu-Jamal is seeking medical care to treat the hepatitis C virus he contracted from a blood transfusion in 1981. Pam Africa, of the International Concerned Family and Friends of Mumia Abu-Jamal, says, “A legal victory in Mumia’s case will also be a victory for the other 10,000 Pennsylvania prisoners afflicted by hep C.”

The Senate study found that since Sovaldi’s approval, Medicare had paid out nearly $8.2 billion, before rebates, for Sovaldi and Harvoni — a six-fold increase in spending for HCV treatment. The combined cost for the drugs in all state Medicaid programs in 2014 was $1.3 billion before rebates. Because of this hefty price tag, less than 2.4 percent of 700,000 Medicaid enrollees with HCV received the new cure.

The Senate study concluded that Gilead pursued a “calculated scheme for pricing and marketing its Hepatitis C drug based on one primary goal, maximizing revenue, regardless of the human consequences” and with “little concern for access or affordability.”

The study determined that even though Gilead knew its exorbitant prices would deny treatment for millions and create serious financial burdens for Medicare and Medicaid, the company still went ahead. Gilead projected $20.6 billion in revenues from U.S. sales of Sovaldi and Harvoni for the 21 months following introduction of the drugs.

The federal investigation shed light on Gilead’s greed but offered no concrete action to stop it. While other industrial countries restrict what can be charged for prescription medicines, no such limits exist in the U.S., where drug companies can charge whatever they can get away with.

Drugs overpriced in the U.S. are available in other countries for far less. In India generic versions of Sovaldi and Harvoni run $900 for the 12-week course. In Europe the cost is around half that in the U.S.

One reason for lax U.S. restrictions may be “benefits” that politicians receive for maintaining the status quo. The pharmaceutical industry spends more money lobbying Washington — $3 billion from 1998 to 2015 — than the military industry and Big Oil combined. (opensecrets.org)

Due to numerous mergers, companies like Gilead Sciences, Pfizer, AstraZeneca, GlaxoSmithKline and Turing Pharmaceuticals control the sale and distribution of high-demand prescription medicine.

In August, Turing Pharmaceuticals CEO Martin Shkreli, a former hedge fund manager, raised the price for Daraprim from $18 to $750 a pill — a 4,000 percent increase. Developed to treat malaria, Daraprim is Turing’s brand name for pyrimethamine, which is also a critical treatment for a parasitic infection often fatal to people with compromised immune systems due to HIV/AIDS or cancer.

The London-based pharmaceutical company Burroughs Wellcome first developed pyrimethamine in 1953. Forty-two years later, Burroughs Wellcome merged with British-based Glaxo. In 2010, now GlaxoSmithKline sold the U.S. rights to the drug, renamed Daraprim, to CorePharma. The patent on pyrimethamine had expired, but there was no generic competitor, so CorePharma had a monopoly on the drug when it was sold to Turing.

A course of treatment requires 100 pills and originally cost $1,800. Now Turing has raised the cost to $75,000 for U.S. patients. However, the drug is still available in Britain for 66 cents a pill and costs even less in India.

In 2014, four drug companies — Hoffmann-LaRoche, AbbVie, GlaxoSmithKline and Eli Lilly — had profit margins exceeding 20 percent. However, Pfizer led them all with a 42 percent margin. But that apparently wasn’t enough for the U.S. pharmaceutical giant.

On Nov. 9, Pfizer revealed plans for an all-stock merger with Ireland-based Allergan — the largest merger in pharmaceutical industry history.

Under the deal the two companies will combine under Allergan, which will be renamed Pfizer for Wall Street trade purposes. The “new” company will retain Allergan’s legal and tax residency in Ireland, while Pfizer’s global operational headquarters will be in New York.

As a result of the $160 billion merger, Pfizer-Allergan will enjoy a significant tax savings. Ireland’s business tax rate is under 18 percent compared to 25 percent in the U.S. Only four of the 10 biggest global pharmaceutical companies remain U.S.-based.

Major drug companies promote the myth that they have to charge more for drugs because of the high cost of research and development. Nothing is further from the truth.

Marcia Angell, senior lecturer at Harvard Medical School, noted that often the company which developed a drug is not the one currently marketing it. “[L]ike big fish swallowing little fish, larger companies either buy small firms outright or license promising drugs from them.” (Washington Post, Sept. 25)

The initial discovery often happens at a university lab that receives public funding from the National Institutes of Health. The drug is then licensed by a start-up company partly owned by the university before it’s turned over to a private company. Big drug companies are rarely involved in innovation. Instead they create minor variations of top-selling drugs designed to lure new patients, even if the new version is no more effective than the old one.

Only 16 percent of drug-producing costs stem from research, compared to 30 percent for marketing. We’ve all seen those ubiquitous television ads, often playing in clinic waiting rooms, telling us to “Ask your doctor if XYZ drug is right for you.” The pitch usually features attractive people enjoying themselves outdoors. The ads end with a rapid-fire recital of possible, potentially serious side effects, often including “risk of death” — almost drowned out by upbeat music.

The other 54 percent of drug costs are for corporate administration (including CEO salaries) plus the profits drug companies enjoy — at public expense.

By maintaining U.S.-based research divisions, Big Pharma can take advantage of NIH-funded research. At the same time, with parent companies headquartered abroad, they evade paying taxes to the U.S. For the corporations it’s a win-win situation. For people in dire need of life-saving medications, the best remedy is to end this profit-crazy system.