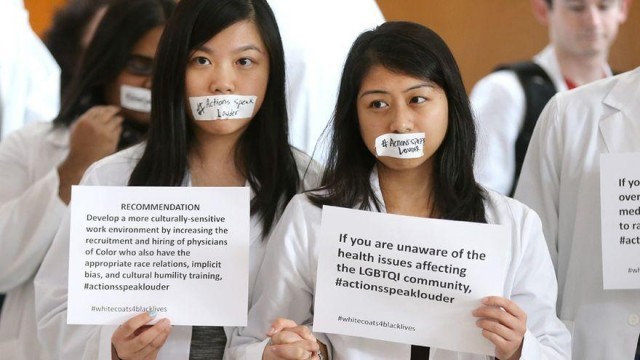 On Dec. 10, University of Rochester medical students, joined by some faculty and staff, protested against racism at the university and in the health care system as a whole.

With the words “Actions speak louder than words” taped over their mouths, 100 demonstrators crowded into the Flaum Atrium of the UR School of Medicine and Dentistry.

The protest was called by students in the local chapter of White Coats for Black Lives, an organization inspired by the Black Lives Matter movement. “We, as future physicians, could not stay silent because we know that medicine is not immune to the racism that is rooted in our education, housing, employment and criminal justice system,” said Guyida Richard, a second year UR medical student and one of the protest organizers. Richard went on to say that the racial climate has “gotten worse.” (Democrat and Chronicle, Dec. 11)

The protesters want better training of medical students so they are able to better address the needs of people of color. They also want increased diversity in the medical school faculty and recruitment of more students of color. For this school year, 41 of the 435 students at the medical school are Black, 26 are Latino/a and 11 are of two or more ethnic backgrounds.

Another demand calls for discussions about structural racism in medicine. Students related “implicitly racist” stereotypes of people of color that can stand in the way of proper treatment.

The University of Rochester, with its associated teaching hospitals, is the largest employer in the city. With a student enrollment of 4,500, its endowment of nearly $3 billion makes it one of the richest per capita schools in the country. ­(Endowment.com)

The Board of Trustees looks like a who’s who of the Rochester business elite, except for those who hail from Wall Street.

As is the case for universities in many cities, the UR is located right next to a large oppressed community. It pays no property taxes, not even payments in lieu of taxes. Nevertheless, the university recently pressured the chronically broke city to float a $20 million loan for its new College Town, a gentrification project that has driven many residents and small businesses from the community.

The White Coats for Black Lives organization is a welcome movement toward solidarity among the youth of Rochester and around the country of different nationalities and ethnic groups. It’s an inspiring example of how the Black Lives Matter movement is at the forefront of struggle.