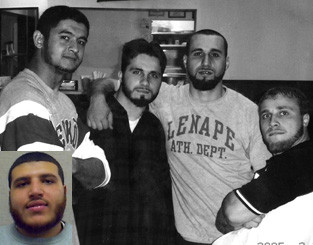 Standing up to an unrelenting wave of fear and hatred in the media targeting anyone of the Islamic faith, political activists in Philadelphia are building support for five Muslim men unfairly convicted of terrorism in New Jersey. Members of Project SALAM and the Fort Dix 5 Support Committee are urging community members to attend an appeal hearing on Jan. 6 in federal court. The hearing will rule on whether the men received a fair trial.

In 2008, five Muslim men, including three brothers, were entrapped in an FBI sting operation for allegedly plotting to attack Fort Dix, N.J. Eljvir, Dritan and Shain Duka received life sentences plus 30 years for their disputed role in a government-manufactured “conspiracy” to attack the military base.

At the trial, the government’s witness — an informant paid to entrap the brothers — conceded that the three brothers had never been told about any conversation regarding an attack on Fort Dix. But under federal law, in a conspiracy case all associates are considered equally culpable, even if they do not know of the existence of a plan.

The appeal hearing is not just a new chance for the three brothers to state their innocence before a judge, but also an opportunity to call attention to this outrageous miscarriage of justice.

Supporters have organized weekly “Hold a Banner for the Dukas” rallies in front of the U.S. courthouse where the hearing will be held, handing out fliers to passersby. At one such event, a professor from the nearby Rutgers University Camden campus stopped by and extended an invitation for organizers to speak to his students.

At a public gathering in Philadelphia on Dec. 12, two documentaries were shown, including “The Newburgh Sting,” which focuses on an entrapment case similar to the Fort Dix 5 case. The Peabody Award-winning film investigates the 2009 case of the Newburgh 4, in which FBI informants turned four innocent African-American men into unwitting “terrorists.”

A short documentary film, “Entrapped,” was also shown. It includes a summary of the Fort Dix 5 case and an interview with Burim Duka, the youngest Duka brother. Alicia McWilliams, aunt of one of the Newburgh 4 defendants, Burim Duka and Lynn Jackson of Project SALAM answered questions after the films.

Injustice in atmosphere of fear

Several people in the audience commented that Donald Trump’s campaign of racism and anti-Muslim, anti-immigrant bigotry was creating a resistance movement more willing to fight back today than after Sept. 11, 2001, or in April 2009 when the Fort Dix 5 were sentenced.

In an atmosphere of Islamophobia fueled by ambitious politicians and sensationalist media headlines such as “Muslim fanatics” and “Jersey jihadists,” the Duka brothers were convicted of a plot they literally had never heard of before their arrest. The U.S. attorney who prosecuted the case was Chris Christie, now governor of New Jersey and candidate for U.S. president.

The rare, court-ordered appeal hearing is scheduled for Jan. 6 to determine whether the three brothers received a fair trial and effective representation from their court-appointed attorneys. Supporters are urged to show solidarity at a short rally at 8 a.m. in front of the Mitchell H. Cohen Building and U.S. Courthouse, 4th and Cooper streets, Camden, N.J. Court proceedings begin at 9 a.m.

More details on the case can be found at projectsalam.org or in the 2009 Workers World article, “The Fort Dix 5 convictions: provocation and frameup?” tinyurl.com/zy58fsq.