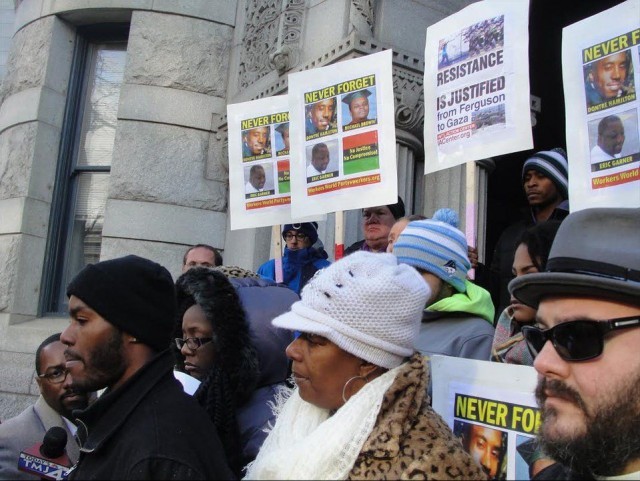 The Coalition for Justice in Milwaukee held a press conference at the federal courthouse on December 17 to demand justice for Dontre Hamilton and all other victims of police terror. A wide variety of labor and community forces participated.

Dontre Hamilton, a 31-year-old Black man, was fatally shot 14 times at Red Arrow Park in Milwaukee by Christopher Manney, a white Milwaukee police officer, on April 30, 2014.  Manney, who was fired, has not been charged with his murder.

That day inside the federal courthouse, U.S. Department of Justice officials, along with Milwaukee Mayor Tom Barrett and Police Chief Edward Flynn, held a press conference that members of the public were barred from attending. They jointly announced what they say is a two-year “examination” of the Milwaukee Police Department’s policies, training and practices during a “collaborative reform initiative” with federal officials.

At the COJ press conference, members of the Hamilton family and others announced the coalition’s demands of the Milwaukee police department, whose officers are guilty of numerous murders of mostly Black and Brown people and thousands of atrocities, such as public “strip searches,” in just the past few years.

For more information and how to support the COJ: facebook.com/justicefordontre.