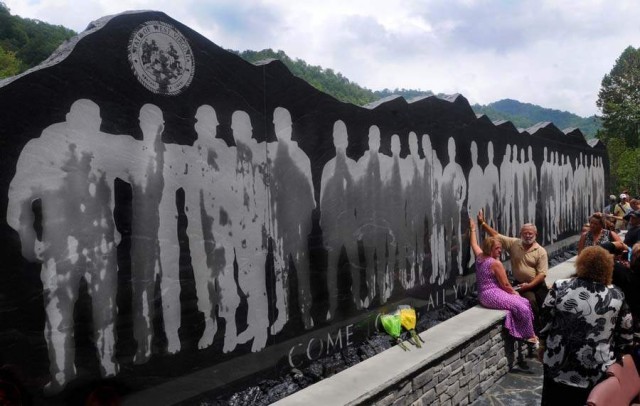 Huntington, W.Va. — Imagine leaving for work. As you walk out the door, you look back at your children, not knowing if you are ever going to see them again.

For thousands of miners, this is a daily reality. In the case of 29 coal miners in Raleigh County, W.Va., it is exactly what happened on April 4, 2010. They went to work and never came back.

This was the day of the Upper Big Branch mine disaster in Montcoal, only about an hour from Charleston, the state capital. The disaster was caused by the neglect and carelessness of the coal mine’s owners, Massey Energy Co., and specifically the company CEO, Don Blankenship.

The disaster actually started before 3 p.m., when an initial explosion occurred. The drill parts on a coal shearer, an essential piece of mining machinery, were broken and got overheated. It was only a matter of time before the hot, broken drill bits hit a methane line, unfortunately not uncommon, and ignited a spark that caused an initial explosion.

Safety mechanisms were supposed to be in place, such as lime sprayers to neutralize the flammable coal dust in the air and water sprayers to put out any fires that might occur. All this equipment was broken and unchecked, even though all inspection records stated they were operational. This was a lie, as an investigation found out after years of probing and digging.

Well, this is just collateral damage, right? Just the hazards of the job? Not true! This did not have to happen. This should not have happened. Even a report released by Davitt McAteer, lead investigator for the governor’s “independent” investigation team — independent in quotes because Big Coal and the West Virginia governor’s office are rarely independent of each other — found that Massey failed to follow basic mine safety standards and that its corporate culture has always been one of putting profits before the safety of employees.

It was also discovered that Don Blankenship had direct knowledge of the violations and in many instances encouraged ignoring them to save the company money, even hiring unlicensed foremen to sign off on supposed “inspections” that never took place.

In November 2014, Blankenship was indicted on federal charges of conspiring to willfully violate federal mine and safety standards, conspiring to cover up safety violations, hindering law enforcement from doing their jobs by warning his foremen that the government was coming to inspect, and lying about safety standards at the Upper Big Branch mine prior to the explosion.

His case finally went to trial Oct. 7. After a two-month federal trial, which included a change of venue, the verdict came on Dec. 15: guilty on a misdemeanor charge of conspiring to violate mine safety and health standards. However, Blankenship was acquitted on the two felony charges of lying and fraud committed against the mine safety administration.

Pat McGinley, a law professor at West Virginia University, commented, “This is one of those unique situations where federal prosecutors are outgunned and resourced by a multimillion-dollar defense team.” (statejournal.org, Dec 10) Although to those not from the Coal Baron class, this is not unique. Repeatedly, coal money wins in Appalachian government.

We have seen this corruption for a long time. In the case of Don Blankenship, it has been personified. Blankenship received a “salary” of $18 million the year before the disaster. He was let go from Massey Energy with a $12 million settlement package after the explosion. He killed 29 people and walked away richer than before the disaster.

Appalachia is a forgotten region, condemned to disgusting stereotypes in the corporate media that create an atmosphere of uncaring for the fate of the Appalachian worker. While they focus on San Bernardino, Calif., and use it as a pretext to fight and kill innocent people thousands of miles away, the deaths of coal miners here in West Virginia are forgotten as long as the coal barons rake in more profits.

However, their families, friends and communities will never forget and will continue to fight for justice. By any means necessary.